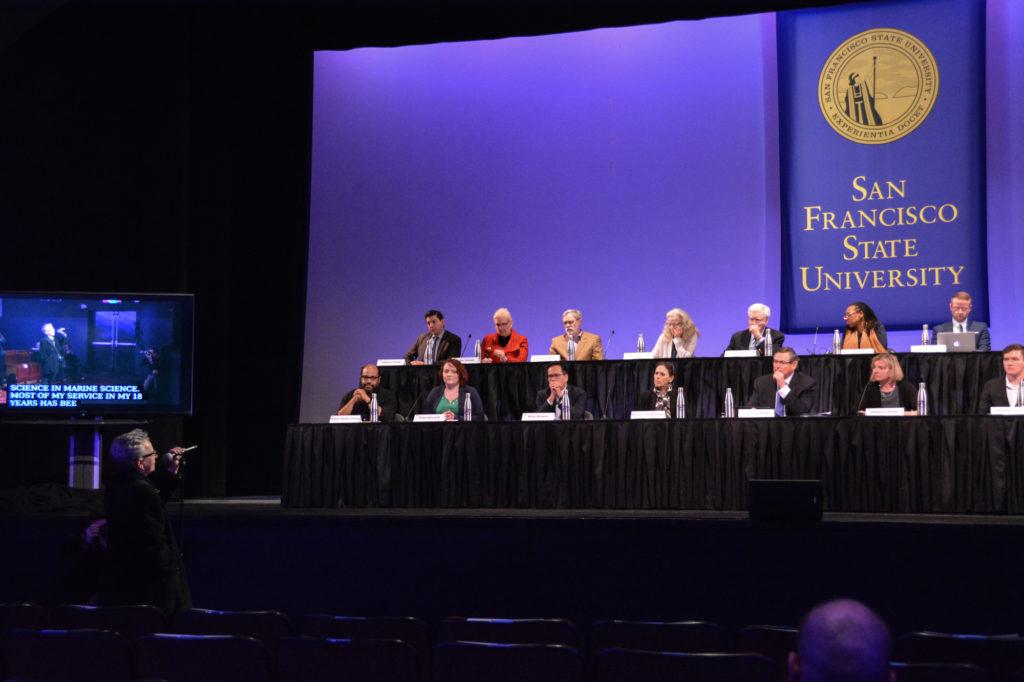 An audience member addresses a panel of administrators and one student at the SF State Presidential Search Committee open forum on Feb. 5. Photo by Shaylyn Martos

SF State students, faculty and staff told members of the Trustees Committee for the Selection of the President what they hope to see in the person hired to fill outgoing President Leslie Wong’s shoes in an open forum held in the McKenna Theater on Tuesday, Feb. 5.

Members of the SF State community took the opportunity to express frustration with the current administration’s failure to deal with many of the issues that face the campus such as housing availability and cost, student resources, and a disconnect between what students need and what the university is currently providing.

“I think on this campus, it’s disgusting and gross how the university not only plays games with how it addresses the housing crisis, but [also] in not making any efforts in finding a solution,” said SF State student Jules Retzlaff.

Tuesday’s forum was the first and only meeting open to the public that the Trustees Committee for the Selection of the President will hold to discuss the search for the next president.

Once introductions were resolved, and the audience was given the ability to approach the microphones in the dimly lit auditorium, professors were the first to come forth and speak their minds.

“San Francisco State University, like other CSU campuses, is in need of an advocate and leader with vision for the University,” said professor of gerontology Darlene Yee-Melichar. “[A President] who represents us well at the campus system and intersegmental levels, as well as the community, state, regional, national and global levels.”

Many of the sentiments from the faculty that came up ranged from student care to the care of their own jobs, with budget issues being a current issue on campus.

However, one of the first non-professor speakers, brought up a topic that was echoed repeatedly during the forum.

Oumani, who provided no surname, approached the microphone casually dressed with his chest out and chin up to bring up the issue of housing affordability on campus.

Oumani is apart of a coalition group called SF Unite, a collection of multiple social justice groups in the city concerned with the current direction of the university.

“We have been working with the Supervisor’s office [and] Supervisor Yee of San Francisco, and we have met with various executives on these different issues related to homelessness with your student population,” Oumani said.

Whether a student is awarded campus housing or living in surrounding areas the cost of living in the San Francisco Bay Area is high and students are struggling to make it through the semester.

There is no set of statistics explaining how many students live without a home, yet it’s a reality for many students and it’s a long way from resolution.

Many SF State students who can afford gas but not rent have instead taken residence in motorhomes parked near the university where they can take advantage of surrounding resources like the Mashouf Wellness Center to shower and the Stonestown Mall nearby for clothes and food.

“This University has no legitimate data on how many students are homeless or housing insecure but they’ve been accepting more and more students outside of the Bay Area without the proper housing,” Oumani said. “It’s also inappropriate because local enrollment is being decimated.”

Kay Gamo, a physician at SF State Student Health Services offered her perspective on the lack of funding available for student wellness, noting that in her 11 years working at the university she had seen the medical staff cut in half.

“We’ve been talking a lot and hearing about the barriers to student success and certainly the high cost of living is a barrier and that touches on health,” Gamo said. “I’ve been amazed at how many students work full time or more… they’re rushing to class and then catching the Muni to get to their job, they’re taking BART to get back home.”

Senior Nathan Bowman said the cost of living has shifted students’ focus from passing their classes, to making enough money to afford rent and food.

“I’m having trouble focusing on the academic side of things because I spend so much time working where I have to focus on how I’m going to pay rent,” said senior Nathan Bowman. “I bring this up because a lot of students on campus feel dismissed by SF State’s administration, when trying to bring up issues that they care about.”

Besides housing, the disconnect between the administration and the student body was another issue brought up.

“I feel students have been silenced everytime we come with great ideas or solutions when we’ve come with problems like when our rights are being violated,” said Celia Gonzalez, SF State student.

There were multiple issues being brought up by students who attended.

One of them being there was one student representative sitting on the Presidential Advisory Search Committee, ASI President Nathan Jones.

“It’s a little intimidating in a way,” Jones said in an interview with the Xpress. “I’m the only person who can speak on behalf of all students, but I’m not scared. I’m definitely excited to be apart of the process.”

Sitting in his office located in the Cesar Chavez Center, Jones acknowledged the frustrations that students displayed during the open forum.

“Everything that was said, that was entirely representative of what the student’s were feeling and stuff that I’ve personally experienced,” said Jones, a fifth-year senior.

Jones may be the lone student representative but he hopes that his voice won’t be the only one heard.  He said students take the initiative of reaching out and voice their opinions on the President search.

“I hope that the students will take advantage of these opportunities for feedback that they have,” Jones said about the option for students to send emails to the committee by going to http://presidential-search.sfsu.edu.

Jones also said the Associated Students will be holding open meetings on Feb. 27 and Mar. 13, in the Cesar Chavez lobby for students, faculty and staff. Both dates slated for 12-2 p.m. Everyone is encouraged to come and say what they feel needs to be said.

The committee will be holding closed meetings and interviews over the next several months until the next president is chosen.