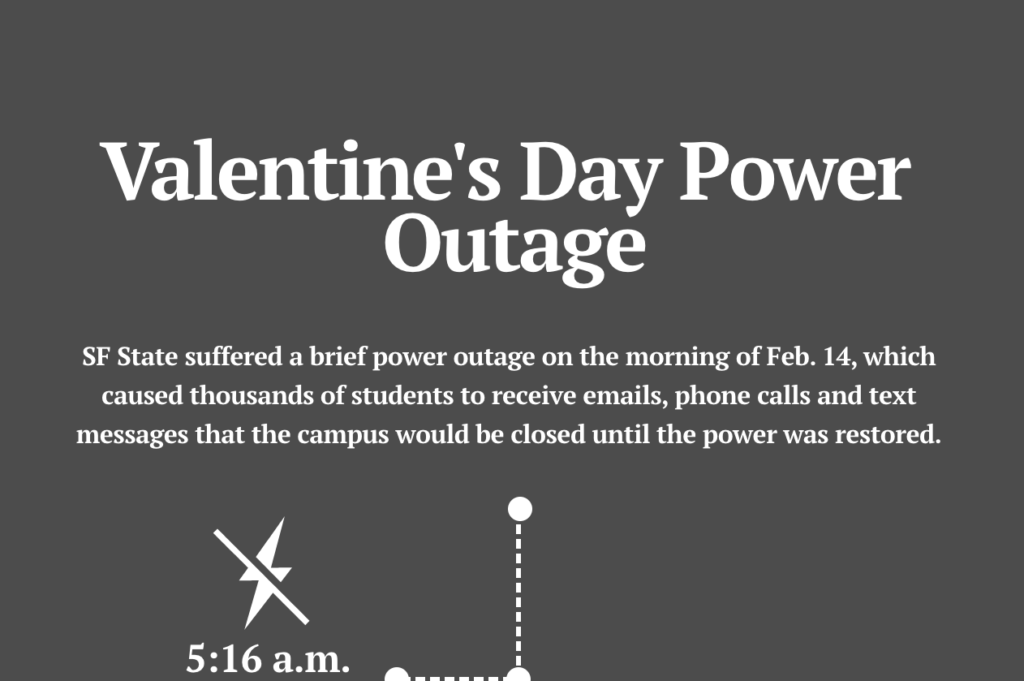 Student Affairs and Enrollment Management sent out a series of early morning texts, phone calls and emails Thursday to announce the closure of campus due to a power outage, but two hours after the first alerts, another series of communications circulated, reversing the announcement.

Many students, staff and faculty woke up to the first alerts announcing the outage at 5:16 a.m. Almost an hour later the next wave of messages were sent to convey that the campus was closed, and a third set of communications just before 6:30 a.m. announced that the closure
included the main campus, the SF State Downtown Campus and the Estuary and Ocean Science Center. A fourth and final group of alerts were sent an hour after that to inform the community that the campus would reopen.

“Y’all said until further notice campus is closed because of the power outage,” tweeted pre-nursing major Fiona Ayellah Sivila, at 7:22 a.m. “What happens when the power is back on? Can y’all make it more clear for commuting students so they know whether or not they should waste money to go on campus.”

Many students were unsure if they should go to campus and if classes were cancelled, especially commuters.

Sivila commutes from Hercules on BART and it takes her about 45 minutes to get to campus.  Although her classes weren’t canceled that day, she was 40 minutes late to class.

The power outage was caused by storm-related issues due to the wind and heavy rains Thursday morning, according to university
spokesperson Mary Kenny, but the university failed to clarify whether classes would go on as normally scheduled in the last alert, and many students were confused and frustrated by the university’s management situation.

Pascual later said to Xpress, “SF State should’ve just canceled [since] we are a commuter school and it not only affected me but other students.”

“The University is doing all it can to provide appropriate and timely notification to all students, faculty and staff for all emergencies,” Wu said.