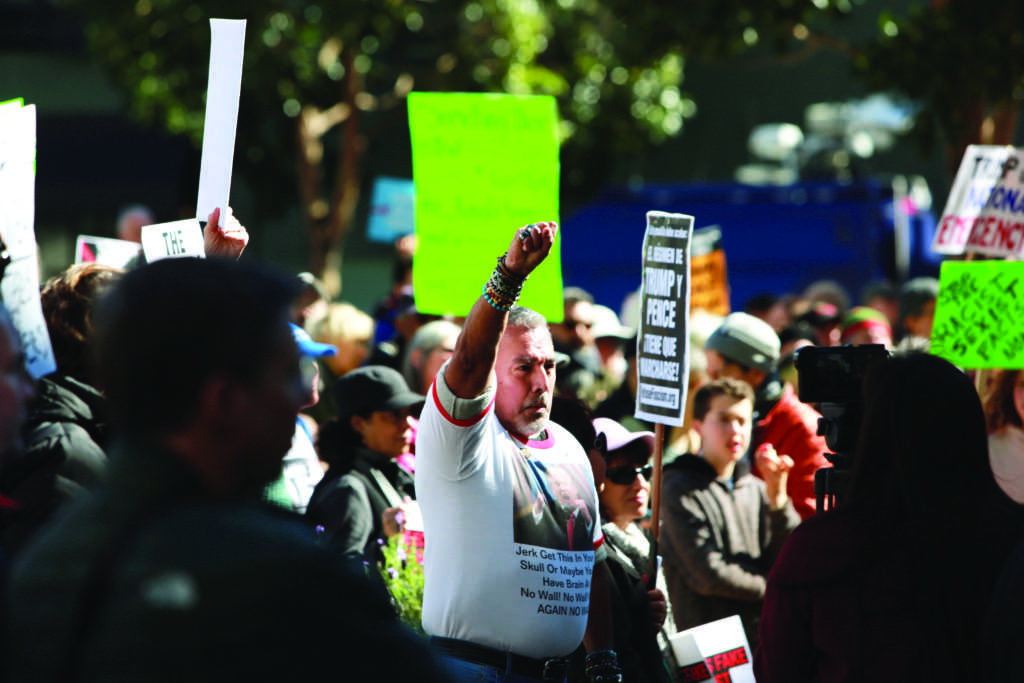 at a protest in front of the San Francisco Federal Building in response to President Trump's declaration of a national emergency at the U.S.-Mexico border Feb 18, 2019 (JAMES CHAN/Golden GateXpress)

Protesters swarmed around the San Francisco Federal Building Monday to denounce President Donald Trump’s declaration of a national emergency to fund his proposed wall on the U.S.-Mexico border.

The rally was co-hosted by Move On and Indivisible SF, two social justice organizations that encouraged attendees to write to Congress to end what they are calling a “fake national emergency,” according to Steve Rapport, a member of Indivisible SF’s steering committee.

“It’s quite clear that there is no national emergency at the border,” Rapport said. “It’s also quite clear that the people of the United States voted in November in massive numbers that we didn’t want a wall… the Congress voted not to fund the wall.”

Rapport said the democratic process does not involve the president making authoritative decisions on his own.

Since Trump’s election, “Not My Presidents Day” became the new name for President’s Day at these gatherings, according to Rapport.

Many protestors carried signs decrying the wall and some wore pink cat-eared hats reminiscent of the first post-Trump Women’s March in 2017.

“We’re getting married in two months so obviously we have other things to do,” Allen said. “Nothing is more important than democracy.”

Lamott said attending rallies gives her hope. She attends them out of love for the misrepresented and the environment, in protest of the laws that seek to destroy them.

“We just have to take some action,” Lamott said. “It’s not helpful to stay at home and watch TV and be infuriated and grieve.”  Lamott said it’s important to rile the masses and include all ages. She said all she wants for her 9-year-old grandson is clean air, democracy and an upheld
Constitution.

Kerianne Steele brought her 4-year-old boy to the rally to teach him the importance of speaking up for the underrepresented.

“I am concerned that the president is declaring a false state of emergency to continue to stoke the flames of racism,” Steele said.

Steele said this was the beginning of a fascist state that eerily resembles Nazi Germany, which is why she said it was important
to be alert now.

Barry Thornton, representing the organization Refuse Fascism, handed out literature under a giant banner that read: “Trump and Pence Must Go.”

Thornton said the Trump administration and a large portion of the Supreme Court make up a fascist regime. He said the administration is trying to consolidate power and millions need to mobilize before they succeed.

“The state of emergency itself is very ominous,” Thornton said.

“This is how fascist regimes have consolidated power, through states of emergency.”

Thornton was glad to see hundreds of people out, but said there needs to be thousands.

Magick Altman closed the protest and said Trump is not the problem, but the system that allows him to have power is.

“Mother nature has no borders and no walls,” Altman said.