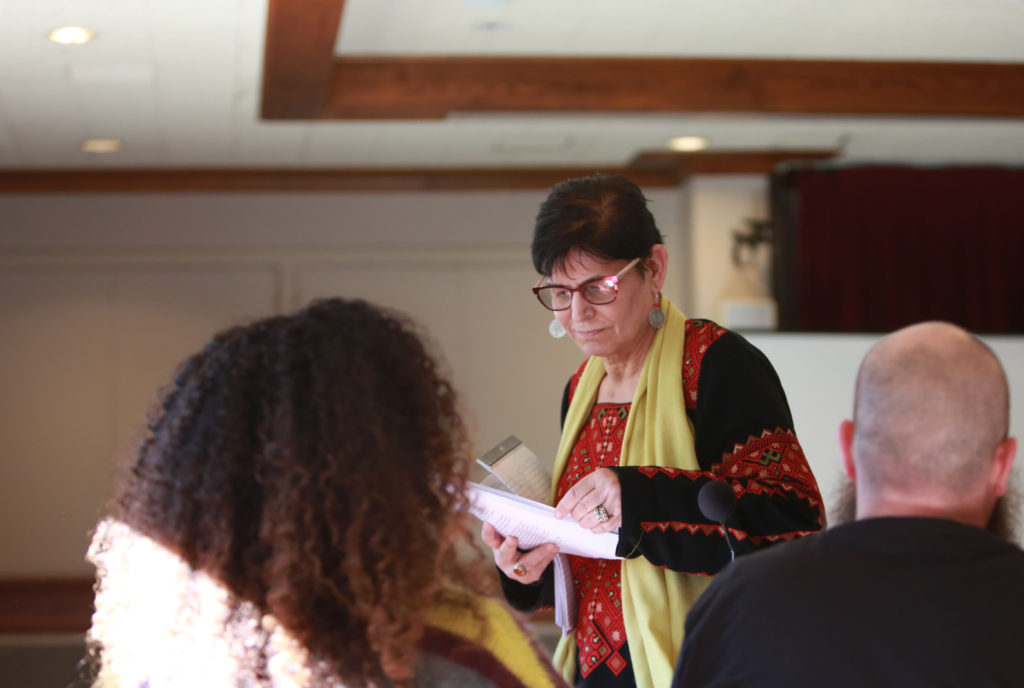 Arab and Muslim Ethnicities Diaspora studies Rabab Abdulhadi hands out a list of demands to community members at the Academic Senate meeting on Feb. 19 2019 (James Chan/Xpress)

Allies of Palestine presented a list of demands at the Academic Senate meeting Tuesday to echo points made at last week’s protest about the administration’s inclusion of Israeli Independence Day on the list of religious holidays.

Arab and Muslim Ethnicities Diaspora Studies (AMED) professor Rabab Abdulhadi, members of the General Union of Palestine Students (GUPS), Jews Against Zionism (JAZ), Students for Quality Education and other community members spoke during the public comment portion of the meeting.

JAZ read a formal statement explaining why acknowledging Israeli Independence Day as a religious holiday is a misstep.

The day is known as “Nakba,” or the “Great Catastrophe” to Palestinians, and as JAZ noted in its statement that it marks the displacement of thousands of Palestinians from their homes by armed Israeli forces seeking to occupy the region.

In an email shared with the Xpress before the meeting, interim Provost and Vice President of Academic Affairs Jennifer Summit apologized in a memo sent to department chairpersons and directors for not including Muslim holidays.

In the same memo, Summit said the Office of Academic Affairs will include Ramadan and Eid Al-Fitr on the list.

But a public apology to all faculty, students and staff for including Israeli Independence Day on the list of observance of religious holidays list has not been issued.

“We came to hold people accountable and ask the Senate to take action,” Abdulhadi said at Tuesday’s meeting.

“May 9, [Israeli Independence Day] represents, for a great number of people, a solemn day of mourning resulting from the Zionist insurgency into Palestine almost 71 years ago,” the statement read.

Students for Quality Education read an additional statement in support of GUPS, saying the administration refused to address and condemn racism, Zionism and Islamophobia publicly on campus. The statement also said administration tried to systematically eliminate AMED through inadequate funding and support.

“President Leslie Wong has openly and publicly welcomed Zionists onto our campus and has threatened to shut down GUPS and expel Palestinian student activists,” the Students for Quality Education’s statement said.

Gerber also said the Academic Senate will debate whether to have a list at all.

“Another solution is to determine what are the holidays that the vast majority of our students celebrate to give faculty a heads up when arranging their schedules to try to avoid conflict,” she said.

The standing committee will meet next week to discuss further options and propose changes to Academic Senate policies.

Alexei Folger, an SF State alumna and meeting attendee, is an active member of the Jewish Force for Peace. The organization’s Bay Area chapter, according to Folger, partners with the Palestine Solidarity Network and said they actively support Abdulhadi in her political and legal disputes.

Folger was shocked to hear of a secular holiday labeled as a Jewish religious holiday. She said she grew up celebrating Passover and Hanukkah but never Israeli Independence Day.

A main objective of the Jewish Voice for Peace, according to Folger, is decoupling Israel from Judaism and Jewish individuals. She said calling critics of Israel anti-Semitic is not only wrong, but dangerous to Jewish people.

“If you can’t identify what is actually anti-Semitism from what supporters of Israel want you to think is anti-Semitism it’s bad for everybody,” Folger said.

She said this misidentification ignores real anti-Semitism, which has resulted in the death of Jews in the United States, and delegitimizes Palestinian claims for basic human rights.

At the meeting, Summit admitted that her office made a mistake in not vetting the list.

“I’m glad to have been able to correct it,” Summit said. “And most of all I’m glad the Senate, through shared governance, is going to address it to make sure it doesn’t happen again.”

Summit emphasized that the list was from Wellesley College and did not reflect a conscious decisions by her office.

Abdulhadi criticized the lack of a public apology from the administration and the length of time it took Summit to respond to an email Abdulhadi sent last week about the issue.

“She didn’t do anything for a week,” Abdulhadi said.

Grace Shimizu, a community member and longtime supporter of the SF State Ethnic Studies Department, was also at the meeting but did not get the opportunity to speak due to time constraints.

After the meeting, Shimizu said she was confused as to why the list wasn’t checked by anyone, especially since SF State has a plethora Arab

Shimizu also said this oversight add to the ways in which the legal system is used to bully professors and student groups who advocate for justice in Palestine and criticize Israel and Zionism at SF State.

She is referring to the dismissal with prejudice by Judge William Orrick III of the Mandel v. Board of Trustees case. This case pitted former SF State Hillel member, Jacob Mandel, and four other Jewish students against 10 administrators and one professor, Abdulhadi.

The Lawfare Project, a non-profit legal think tank and litigation fund representing Hillel, claimed the Jewish students were discriminated against in class and on campus because of their religious and political views.

Abdulhadi said she anticipates more backlash against her for speaking out against the administration inclusion of Israeli Independence Day on the religious holiday list.

“We’re all going to be watching,” Abdulhadi said. “We expect them to do the right thing.”

Corrections: The original print and online version of this story inaccurately stated that Summit apologized in an email about including Israeli Independence Day in the observance list of religious holidays. Summit sent a memo to department directors and chairpersons that apologized for not including Muslim holidays like Ramadan and Eid Al-Fitr. The article also inaccurately refers to Jewish Voice for Peace as the Jewish Force for Peace.

The Xpress regrets these errors.