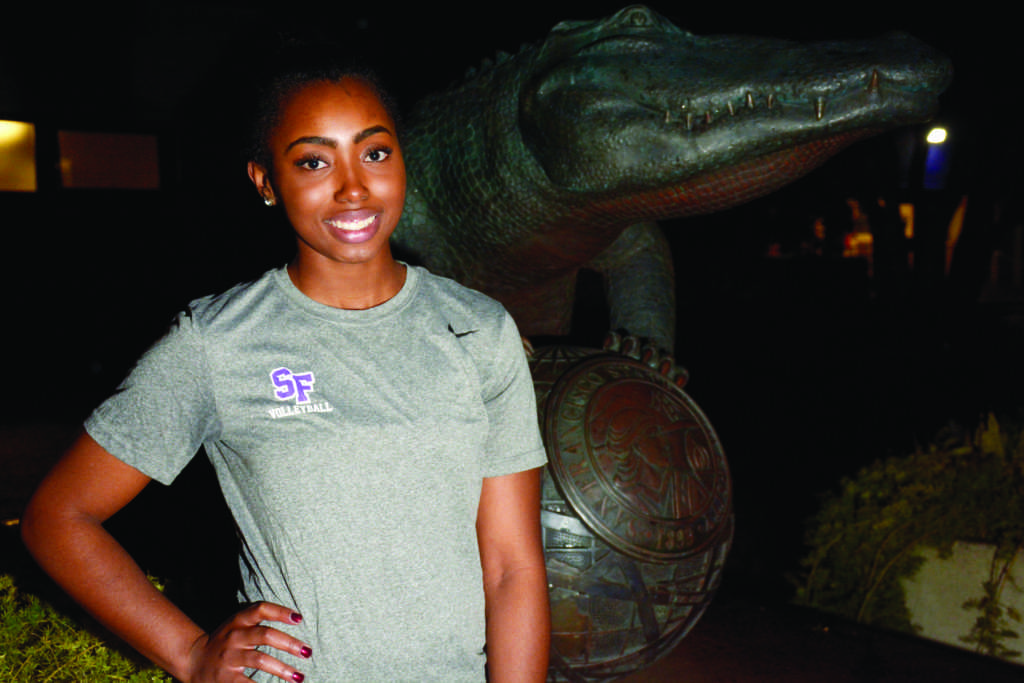 Sports is a conduit between the public and athletes who want to make a positive difference in society for black communities.

Black SF State athletes and coaches spoke with Xpress about what Black History Month means to them.

“Through everything, we’ve persevered so much,” Alexis Henry, a well-decorated senior track and field runner said. “We’ve been put at the bottom of the barrel from the start —and we’re still at the bottom — and I feel like there’s still such a long way to go for Black people and having us seen as equal [in American society] because it’s really not.”

She wants to use her platform to lead and address issues in her communities that are not well-represented in mainstream media.

“Honestly, I don’t feel like I’ve used my platform yet,” she said. “I really want to help the youth because there are kids out here who don’t believe in themselves or are not given the proper resources to come to a college and play a sport, or just come to learn.”

“I just want to give back to the community and help the people that don’t have the platform to show who they really are,” she said. “Once I really grow and continue to get settled in the world, there’s a lot of things that I would like to do for the Black community — our strengths
will never be hidden.”

Assistant men’s basketball coach Henry Anyiam spoke about the significance of Black History Month from the perspective of a mentor.

“First and foremost, I think Black History Month encompasses the dark history between Black people and the American culture, dating back to slavery days and post-Civil War,” coach Anyiam said. “It shows progression, obviously there’s still more to go, but you don’t get from point A to point B without taking the baby steps there. That’s been a huge step [in] that there’s sort of been an effort on the part of American society to try and rectify what happened so long ago.”

As a coach with student-athletes who look to him for direction, he said he understands the weight of his role.

Natasha Smith, head coach of the women’s basketball team, said she is proud of her role; inspiring future generations of Black leaders.

“I have a strong and serious responsibility being in a leadership role,” Smith said. “Doing things the right way is showing that we are also capable of being in these leadership roles and being role models.”

The coaching staff teaches student-athletes skills to guide them in their academic journey regardless of the color of their skin.

Jhaina Stephens, a senior forward on the women’s basketball team, expressed her admiration of leaders like Rosa Parks, who stood up against racial injustice.

As a first-generation college student, she said she focuses on succeeding in her studies so she can be a role model for her friends, family and teammates.

“I’m a first-generation [college student] and I’m beating the odds,” Stephens said. I’m not just a statistic— I’m an above-3.5 GPA student.”

She said living in a society that does not address the challenges that Black student-athletes face makes her appreciative when people in the community help each other succeed.

Ashley Cosey, a sophomore outside hitter who plays for the women’s volleyball team, said she is grateful that people within the Black community at SF State support each other. Cosey used her networking within the athletic program to spread awareness about her younger sister’s diagnosis with a life-threatening disease.

“My sister was diagnosed with leukemia,” Cosey said. “So, I decided that I wanted to give back.”

Cosey said she finds comfort in the fact that her younger sister will know that she can rely on the community to help each other in times of need.

Leadership is a quality that is set by example, like showing the youth how to be a civilian of, not only society but the world as well. Helping others and showing appreciation for those who accomplished so much as a leader allows the youth the reflect on and understand what is important.