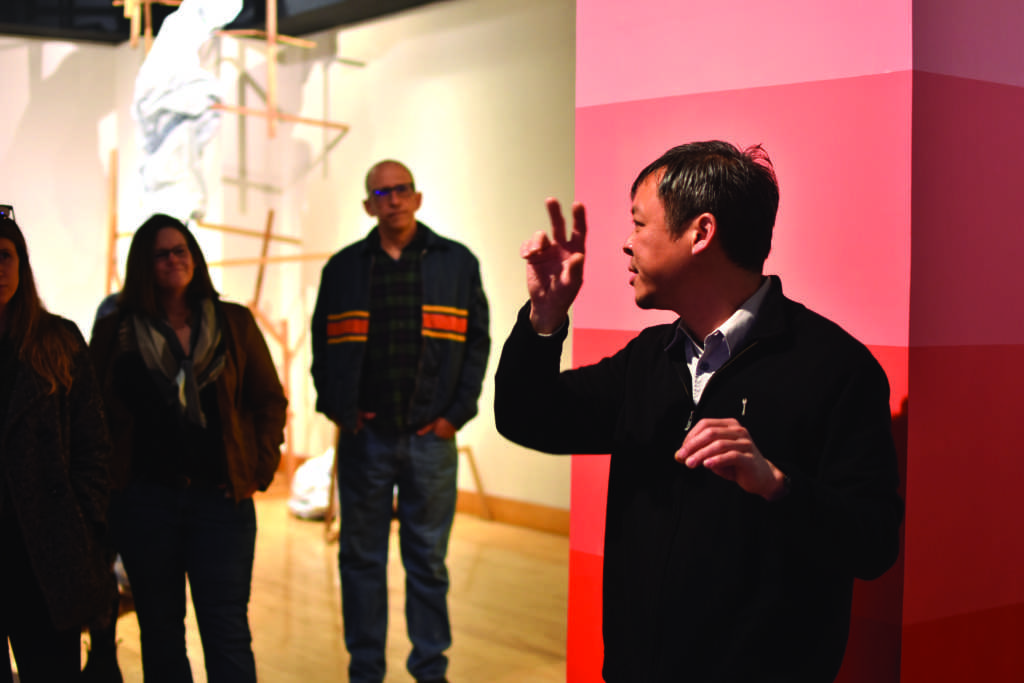 Kevin Chen announces artists and their work while next to an installation called “Spectral Space” in acrylic painting by Andrew Shoultz during the art gallery opening of “Built Environments” on Saturday, Feb. 23, 2019.

The “Built Environments” art exhibit debuted Saturday in the Fine Arts Gallery and showcased pieces that represent the worldwide architecture and construction trends.

Professional and student artists exhibited their creative and whimsical viewpoints of architecture through various media like photography, film and sculpture. The exhibit features work from artists inspired by places all over the world, from Los Angeles to Iraq, and will run through April 4.

Each piece displays boldness in its own way, as the artist represents different parts of urbanization through varying colors, brush
strokes, sediments and films.

Chen resonates with the artwork in the exhibit as an artist himself, specializing in drawing cityscapes.

He points out a sculpture named “Macro Waves,” made from cement, wood and chains.  The piece features a video projection of people in a city greeting and interacting with each other which hangs above a tall cinder block. Pyramids surround the cinder block, which is illuminated by
blue lights. Chen appreciates how this piece highlights urbanization in the city, particularly with defensive architecture.

“You can kind of see the little knobs sometimes that prevent skaters from skating,” said Chen.  That’s like another intervention of humanity in the urban cityscape — creating architecture and different means to control how you interact with space.”

Rick Holty, 48, is one of many fine arts students that helped put the exhibit together.

One piece he helped put together was titled “Between Here and There,” by artist Sheila Ghidini.  This art piece, similar to a blueprint, is made with graphite and extends across a white wall. Lines of tape flow downward from the wall onto the floor, creating a 3D effect. A white chair is part of the exhibit for people to sit and get a closer look of the intricate details on the large piece.

Holty also helped put together art pieces by Bay Area artist Bessma Khalaf.  Khalaf was born in Iraq and is currently based in Oakland. She
came to the U.S. at the beginning of the Gulf War when she was 12 and is now making her mark in the artistic world of photography and sculpture.

One piece showcased by Khalaf at the exhibit is titled “Ash Mountain.” From far away, the piece resembles gray balls of paper crumpled together and stacked on top of each other. As the viewer gets closer, they are able to see a fragile dark mountain propped up by a narrow white shelf attached to the wall.

“The thing that I’m most blown away with is the ash. The photograph and the ash that goes with it, the process of those was really
cool,” Holty said. “And the ash mountain over there is all gravity suspended.”

In an exhibit full of varying media, Khalaf is no stranger.

“I never stick to just one thing, I kind of bounce between those three things and they kind of speak to each other,” Khalaf said.  “So, when I’m sick of taking pictures, I can kind of build something or work with my hands. It’s nice to have that diversity.”

Along with Khalaf’s art, every artist who was a part of “Built Environments” created their very own abstract piece. Whether it was a castle-like glittering white statue made fully of salt or a dome made of pine and held up by concrete bricks, each work of art brings something unique to the exhibit.