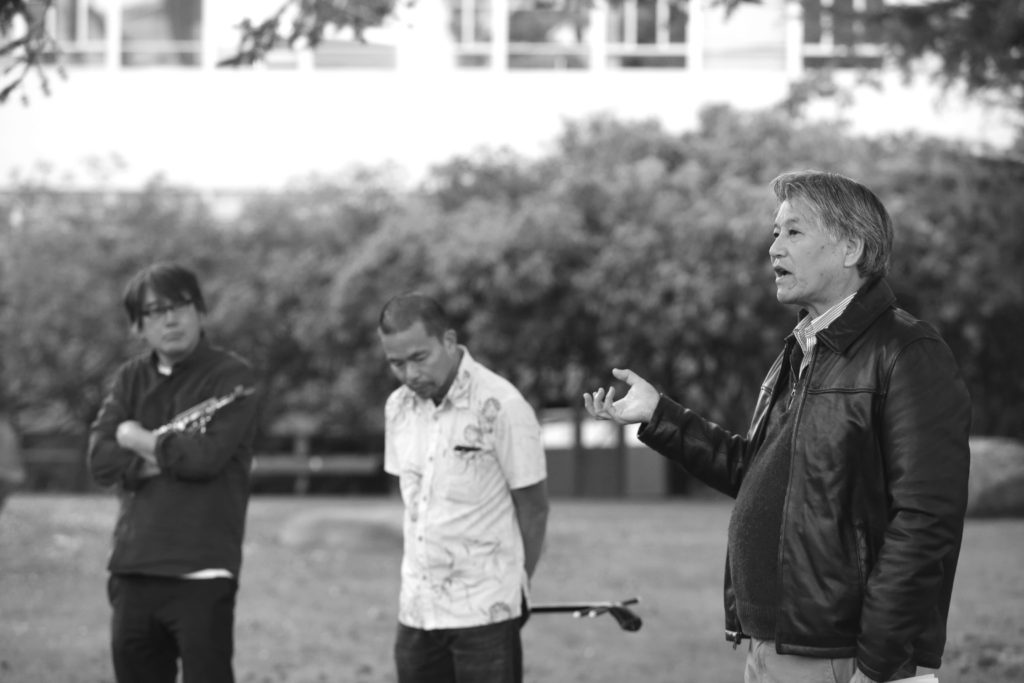 Students, professors, activists and those standing in solidarity with the Japanese-American community gathered Feb. 19 for the 40th anniversary of the Bay Area’s first Day of Remembrance, honoring the more than 100,000 Japanese-Americans who were forcibly relocated to internment camps in California, Oregon and Washington during World War II.

The event took place at the Garden of Remembrance, an installation dedicated to the 19 SF State students who were among those interned by authority of an Executive Order signed Feb. 19, 1942, by President Franklin D. Roosevelt in the wake of Japanese attacks on Pearl Harbor.

Seventy-seven years later, attendees at the event hosted by the Asian American Studies department and Arab and Muslim Ethnicities and Diasporas (AMED) study program stood in the early-evening chill and listened to the burbling of the garden’s waterfall as they held a moment of silence to pay tribute to the SF State students swept up in the U.S.  government’s racist attack on Japanese-Americans.

They then formed a circle in a grassy area of the Garden of Remembrance, holding small LED-candle lights as AAS professors Francis Wong and Wesley Ueunten played music on a saxophone and a three-string guitar called a sanshin.

The commemorative garden, located in a quiet nook between the Creative Arts Building and Burk Hall, was designed by former camp internee Ruth Asawa in 2001 and funded by a $125,000 grant from the California Civil Liberties Public Education Program. It’s adorned with 10 boulders of varying sizes to represent the largest of the concentration camps and the dry, desert-like land they were situated on.  The boulders contrast with the waterfall that marks the internees’ return to their homes on the Pacific coast after regaining their freedom in 1945.

“Let us remember the people who were incarcerated and lift up the presence of their spirits amongst us,” human rights advocate Rev. Michael Yoshii said.

Asawa designed a bronze marker inscribed with the names of the internees, their family crests and the names of the camps in which each was incarcerated. Yoshii spoke to those gathered about his part in the movement of the early 1980s that sought redress and reparations from the U.S. government for the wartime internment of Japanese-Americans like his grandparents.

Born after World War II, Yoshii became heavily involved in bringing justice to the Japanese-American community. When he first joined the Buena Vista United Methodist Church, he sought to make it a place that welcomed newly-arriving immigrants and served as a place of safety and activity for those who were interned.

Tuesday he talked about his involvement in the movement that led to the 1981 congressional hearings to investigate the injustices committed against Japanese-Americans by the U.S. government. He took part in three days of hearings in San Francisco where survivors and loved ones testified about the horrors perpetrated on their communities and the psychological damage they suffered.

“Day of Remembrance is not just remembering the history of pain and the trauma that our communities went through,” said Director of the Japanese Peruvian Oral History Project, Grace Shimizu. “[It’s] also to fight back [and] to hold the government accountable.”

The hearings prompted Congress to pass the 1988 Civil Liberties Act and to write a letter of apology to the victims of the U.S. government’s concentration camps.

“There was a lot of trauma that took place during the incarceration that continued to last,” Yoshii said. “It was not an easy thing to talk about.”

The legislation also formed the Office of Redress Administration, which Congress tasked with coordinating a 10-year program to compensate victims of the internment camps with reparation checks of $20,000.

“That letter didn’t solve everything and the checks don’t rectify everything,” Yoshii said. “Many people said this is a small token to what we really lost.”

AMED studies Director and professor Rabab Abdulhadi, who co-organized the event, was also present to lend her support to the community. She said even the strongest people who’ve been tortured have difficulty speaking and reliving the past, which makes the struggles the communities are currently facing even more important.

“If we don’t tell the stories, people will not remember,” she said.

Among those who stood in solidarity with the Japanese-American community was Zahra Billoo, the executive director of the Council on American-Islamic Relations. Billoo has worked closely with Dr. Abdulhadi over the years, and she talked about her experiences and fears in the wake of Sept. 11.

“I remember thinking, ‘Am I safe in my own skin?’” Billoo said. “I also remember the Japanese-American community stepping forward very quickly. They said they know exactly how this goes and, ‘We’re not willing to let this happen to you the way it happened to us.’”

Yoshii, too, connected the attacks on the Japanese American community during World War II with the treatment of African-Americans during the Civil Rights Movement and the vilification of Arabs and Muslims after the 9/11 terrorist attacks.

“[The internees’] journey continues to inform our journey today regardless of where we are and who we are,” Yoshii said.