Gators drop the ball to Cougars on Purple Out Night 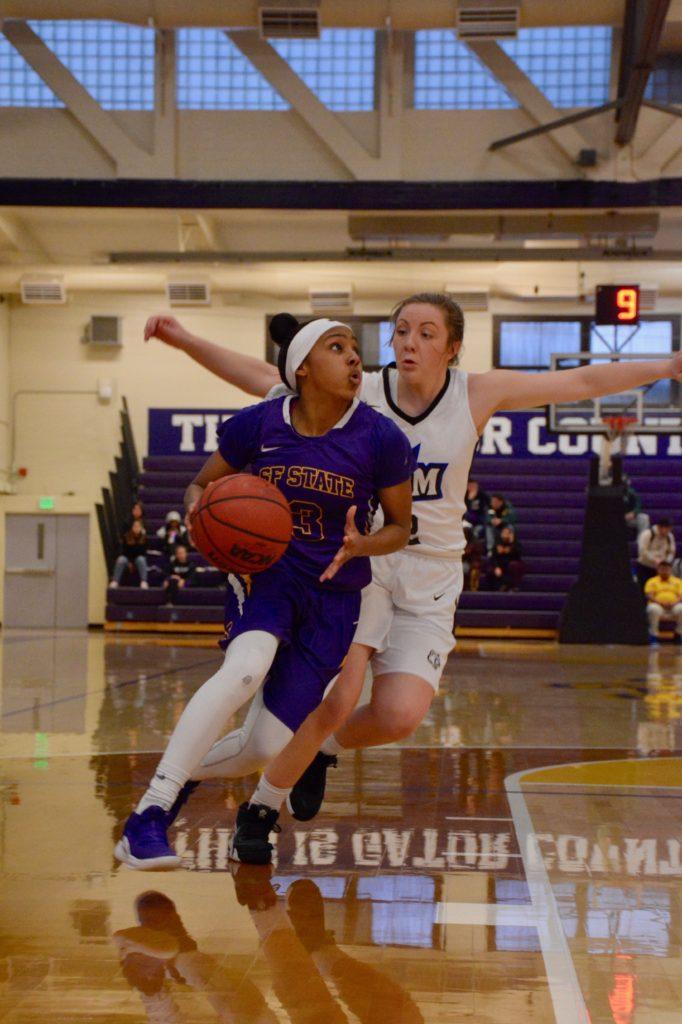 The women’s basketball team played host to the Cal State San Marcos Cougars Thursday, Feb. 21, coming up short 75-62. The Gators were without head coach Natasha Smith due to personal reasons and assistant coach Mars Pasache led the Gators for the ballgame.

Senior forward Jhaina Stephens came out looking to attack and knocked down two mid-range jump shots to start the game. Senior guard, Toni Edwards, complimented Stephens with two drives to the basket and made it a close game early on.

Stephens and Edwards scored eight of the Gators’ 13 points in the first quarter, but the Cougars’ Akayla Hackson went a perfect 5-for-5 from three-point range and outscored the Gators herself 15-13.

One of the main matchups coming into the game was between Stephens and Cougars’ sophomore forward, Emma Forel, who was held scoreless in the entire first half. The Gators were denying the high post all night, but could not run the Cougars off the three-point line as they went 12-21 for the game.

The Cougars’ Jon’Nae Vermillion brought the fight to the Gators and implemented her aggressive style of play in the second quarter with her defensive presence.

Stephens looked fatigued throughout the game, but she carried the Gators on her back and started the second quarter with energy. Within the first minute of the second quarter, she scored twice off the dribble and forced two steals on the defensive end.

The Gators were in need of another scorer and Taimane Lesa-Hardee filled the void. She scored seven points in the second quarter including a big-time 3-pointer in transition and the Gators trailed 35-28 at halftime.

Lesa-Hardee and Isabella Lamonea made up for the slow first half and combined for 10 points in the third quarter, but they could not stop Hackson who ultimately ended the game 8-of-10 from behind the three-point arc.

“No. 13 [Hackson] had the best game of her life, so we have to learn how to adjust and close out on shooters,” said Lesa-Hardee, “We got down on ourselves when they scored, so we have to be better when picking each other up.”

The Gators did not go away without a fight and cut the lead to nine in the fourth quarter, but the Cougars were just too physical on the post. After holding Forel to a scoreless first half, she put up 11 points in the second half to help seal the win for San Marcos.

Stephens played 30 minutes and finished with 18 points to go along with seven rebounds and three steals. Coach Pasache showed much praise for his star senior.

“She’s tough as nails, I have to give it to her and I’ve gone up against her in practice here and there. She was focusing on other areas of her games today and she did a great job taking away the high post.”

The Gators have now lost eight of their last nine games and will host the UC San Diego Tritons on Saturday, Feb. 23.

“We played them [UC San Diego] earlier in the season, they’re a really good team, they gel well,” said freshman guard Taisia Fleming, “We have to do everything on our end and bring it to them.”