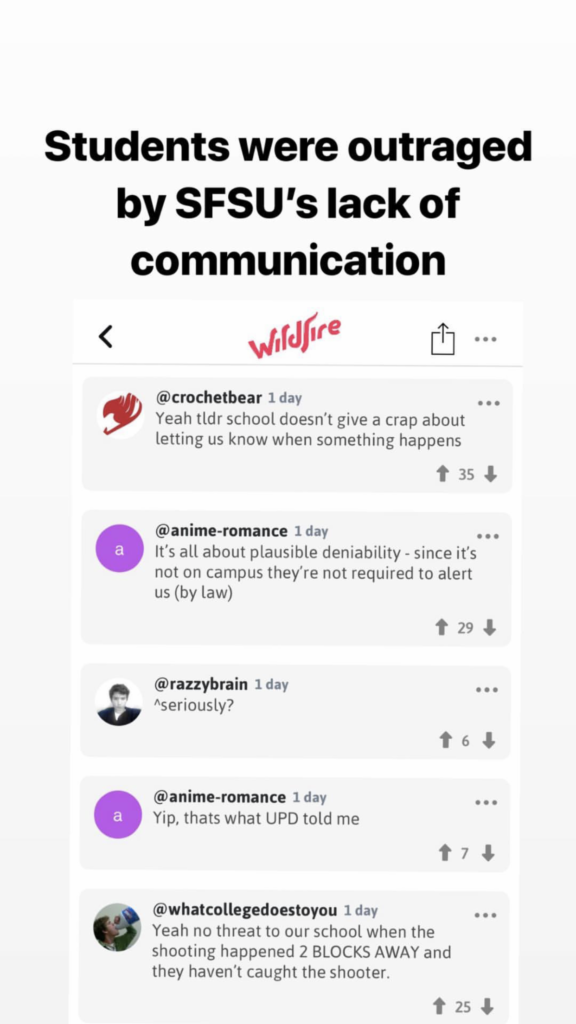 A screenshot of SF State student reactions regarding the University's response to the incident from Wildfire's Instagram account, @wildfire.sfsu.

Students are demanding the University re-evaluate its use of emergency notifications after a chaotic night where the campus community was left in the dark following a shooting, power outage and reports of fireworks.

The commotion began at approximately 7:11 p.m. on Feb. 25 when a shooting occurred at Serrano Drive and Cardenas Avenue in University Park South, a block from the J. Paul Leonard Library. The male non-student suspect in the ongoing investigation has yet to be apprehended, according to San Francisco Police. The woman he shot who is not a student either, sustained a gunshot wound to her upper torso and was
taken to the hospital where she was listed in non-life threatening condition, Sgt. Michael Andraychak said.

Despite the suspect being at large, University Police sent out an email stating the campus was and is in no danger shortly after 10 p.m., but students were out of the loop for nearly three hours and left to rely on hearsay from apps like Wildfire and Citizen.

The fireworks, mistaken by many on social media for more gunshots, and the power outage only added to students’ fears and frustrations with the lack of immediate alerts from University officials.

“I believe that the University failed in their ability to communicate to students what was happening during the times there was an active crime scene,” Joshua Ochoa, Associated Students Residential Hall Association representative, said. “They failed to send any form of communication to students for three hours. Students in the residential communities, in the Library and elsewhere on campus weren’t sure if it was even safe to
go outside.”

Questions have since come up about what constitutes a timely warning, and whether SF State should issue any type of notice in the event of a crime occurring near campus where police determine there is no imminent threat, but students are in a panic and without the facts — just like the events of Feb. 25.

According to UPD Chief Jason Wu, issuing an emergency notification or timely warning was not legally required under the Clery Act of 1990 given the circumstances.

“The University Police Department is responsible for sending emergency notifications and security/safety alerts when there is a potential imminent threat to the campus community,” Wu said in an email. “Last night’s incident was assessed by SFPD and did not constitute such a threat and thus no message was sent out.”

As Laura Egan, senior director of programs for the Clery Center, points out, the Clery Act lays out minimum requirements for issuing timely warnings and emergency notifications, but there is room for interpretation and much is left to the discretion of campus officials. In SF State’s case, that responsibility falls on UPD, who in conjunction with SFPD determined there was no imminent threat.

As of press time Monday, Xpress was awaiting a copy of UPD’s official policies and procedures regarding how such threats are assessed and subsequently handled.

Egan said that if certain information cannot be confirmed until a day or two after an initial report comes in, that might delay issuing a timely warning. Though the Clery Act does not define timely, the Department of Education encourages institutions to issue timely warnings, when necessary, as soon as possible and without undue delay, after information about the nature of the incident and the serious or ongoing threat is confirmed, she said.

“There is no prescription in the law as to what timely means,” she said. “Clery does not prescribe who is to be in charge of issuing warnings or notifications.”

The day after the incident, Park Merced sent an email to its residents around 1 p.m. An email from the Office of Student Affairs and Enrollment Management arrived shortly thereafter at 3:15 p.m.

Neither email was listed as an official Clery alert and neither addressed the status or the whereabouts of the shooter, but the bolded headline on the message from Vice President of SAEM Luoluo Hong read, “Campus community was and is in no danger from last night’s events.”

That consolation, however, came too late and failed to placate students — especially on the heels of a Valentine’s Day fiasco where the University woke students up with a series of calls, texts and emails beginning around 5 a.m. to announce a campus-wide power outage that was resolved before 8 a.m. Classes went on as scheduled and students begrudgingly attended, many arriving late or tired or both as a result of the alerts.

Since the events of Feb. 25, students and residents of Park Merced have met to discuss the discrepancies with how emergency notifications are handled.

“I think the University should’ve at least said, ‘Oh, please avoid this area because there’s a potential crime scene or threat,’ at least 15 minutes after it happened,” one student said during a town hall meeting hosted by RHA. “I think that they really failed. At that point, they should have at least said [something] and not waited three hours.”

Despite all the outrage, SF State officials appear to have acted in compliance with the law.

Egan said a campus can determine to send out an alert about a crime that has occurred, but, if it does not meet the Clery requirements, then it should not be called a timely warning.