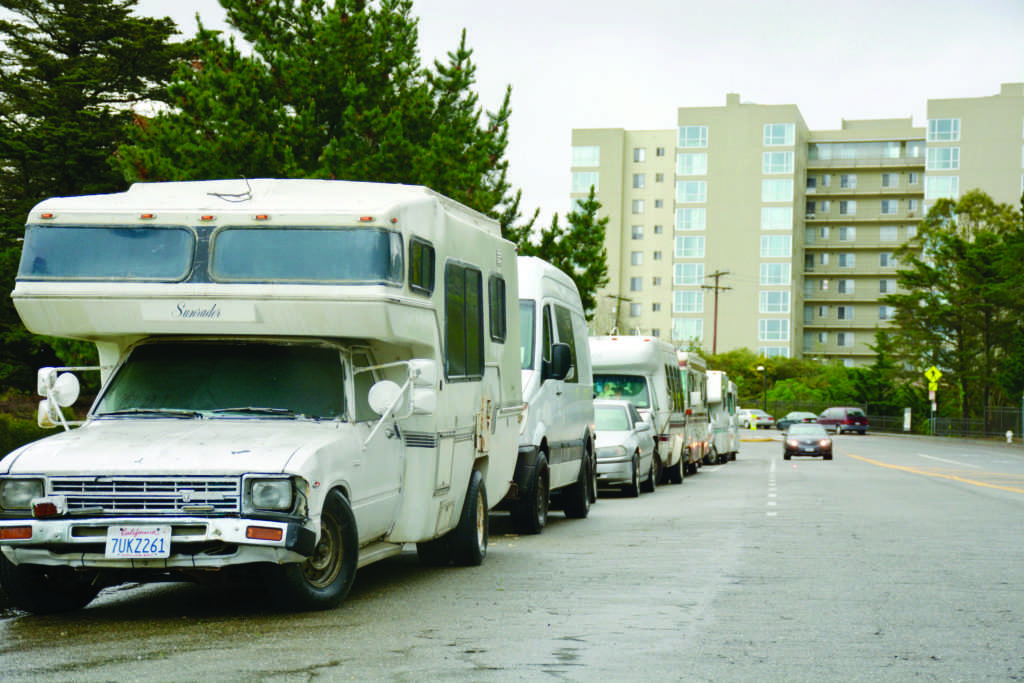 Thirty four-year-old Mohamad Alajtal starts his day by working and taking classes for his master’s degree in mechanical engineering at SF State. After completing his undergraduate studies in Libya, he escaped the civil war in his home country by immigrating to the U.S., where he now lives out of a minivan.

“In order to get my degree, I had to go through this,” Alajtal said.

He supports himself by working part-time at a restaurant and said he cannot pay more than $500 in rent.

“I went through kind of a hard phase where I had to budget every little thing,” Alajtal said.

He opted to rent a van instead of leasing a costly San Francisco apartment.

Navigating the challenges of mobile living is something Brown knows intimately after facing years of housing instability. As a teenager, Brown lived in a vehicle while her mother worked, according to Simley.

Alajtal said life in a vehicle can be harsh, especially when the Mashouf Wellness Center is unavailable. He relies on the center to keep clean and work out, but when the facility closed for winter break, he paid for a YMCA pass to continue his hygiene and exercise routine. Alajtal said he would “absolutely” use the services provided under the new ordinance during campus closures, but other mobile home residents around SF State are uncertain.

Tiago Duel does not attend SF State, but parks nearby on Winston Drive and calls himself “motor-homeless.” He said his RV is his home by choice. His motor home facilities are powered by an $8,000 solar system, leaving him with little need for Brown’s proposed services.

He said even if he did need them, his motor home is bulky and moving it daily would be cumbersome. Duel said his use of the center would depend on its ease of access.

Duel said he avoids fines by moving his vehicle once a week for street cleaning.

However, people living in their vehicles can rack up costly tickets for violating various curb rules, such as 72-hour parking zones and oversized vehicle bans.

Oversized vehicle tickets are around $110, and since sleeping in a vehicle is illegal, people can be fined up to $1,000, according to San Francisco Municipal Transportation Agency analyst Andy Thornley.

Once five or more tickets go unpaid, an individual risks getting towed, at which point people rarely get their vehicles back.

“Worst of all, someone’s home is gone,” Thornley said. “That is way out of proportion to whatever interest the city had in keeping the curb clear.”

San Francisco resident Andrew Kucharski parks his RV on an unmarked curb along Winston Drive. He said that since the area around SF State is safe and so close to the police and fire stations, he probably wouldn’t use Brown’s center either.

“I’m already comfortable [living on the street] so it doesn’t necessarily frighten me,” Kucharski said. “But I see how [the safe overnight parking] could be a benefit, especially to some of the students.”

He also stated his concern over the Wellness Center’s aesthetic in contrast to the RV community.

“I certainly don’t want anything to look like an RV site,” Kucharski said.

And neither do San Francisco neighborhoods, according to Thornley. He said his agency gets a lot of calls about the “wall of RVs” near the Sunset and Bayview-Hunters Point.

“The city knows it’s just a shuffleboard game where they are shuffling folks from one area to another, and they also know that we’re currently in a housing crisis,” Coalition on Homelessness organizer Kelley Cutler said.

Cutler said she has gone to numerous SFMTA meetings to advocate for RV residents because restrictions persist with no alternatives. At a Feb. 6, 2018 meeting, SFMTA said approximately 1,200 people in San Francisco are living in their cars, vans or RVs based on the 2017 Point in
Time Count.

Cutler said these vulnerable people are being targeted for tickets.

“It’s a tough job,” Thornley said.  “Somebody has to be the referee for how we use the curb.”

SFMTA currently has a low-income payment program for qualified drivers who are backlogged on tickets, according to Thornley.  As Brown’s proposal moves forward, a strategy Thornley said he hopes people and organizations adopt is running license plates of potentially lived-in vehicles on the SFMTA website. Doing so will populate a list of how many unpaid tickets people accumulate.  Thornley said advocacy groups
could reach out and warn someone before their vehicular home is towed.

Simley said Brown’s model is still in the works, but the parking and services center would include offices and places for people to sleep.

The city has three months to find city-owned land that would accommodate the project.