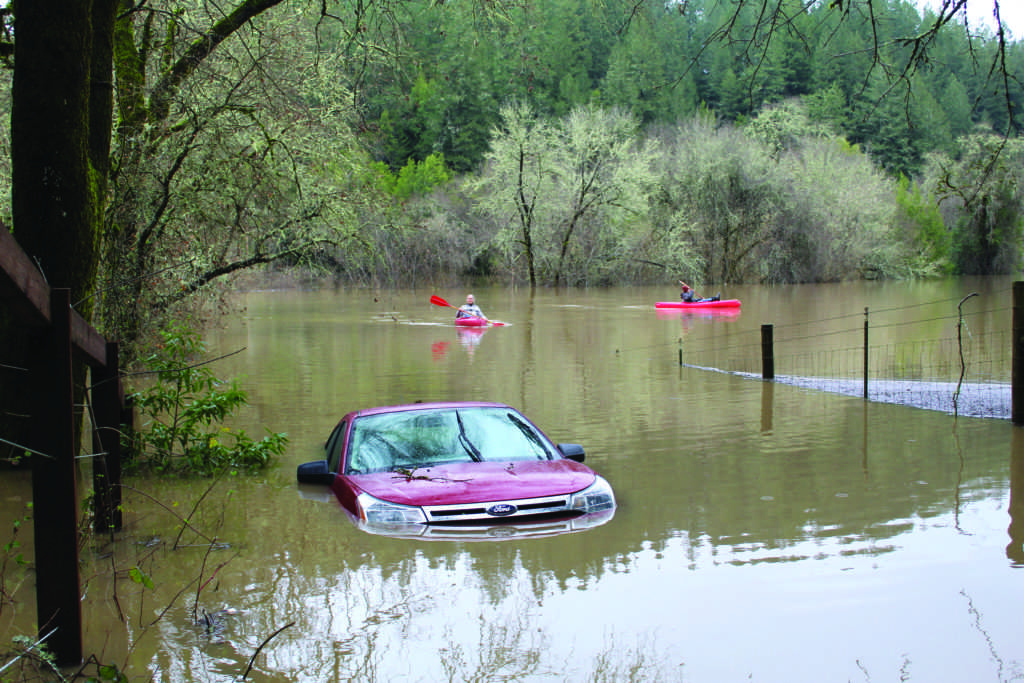 GUERNEVILLE — Severe flooding from the Russian River forced residents from more than 20 Sonoma County communities to evacuate for four days, according to a press release by Sonoma County Sheriff’s Office.

At the peak of the storm on Feb. 27, the Russian River rose above 43 feet in some areas in Sonoma County, according to a Facebook post by the Sheriff’s Office.

About 2,600 properties were damaged by the severe flooding, according to a Sonoma County press release on Friday.

Forestville resident Nick Valadez lives across the street from Green Valley Creek, a tributary of the Russian River that runs South through the town, overflowed, submerging entire cars on Wednesday Feb. 27

Forestville is less than 10 milesWest of Guerneville and North of Sebastopol. Valdez said this is the worst flood he’s seen in 12 years of living in this small, rural river community.

“We know what’s going to happen every year so we get prepared,” Valadez said. “It’s never happened this bad.”

Some residents resorted to using boats to get around the flooded streets.

Forestville resident Muffy Vasale said that it was so deep in parts that people were going over submerged fences in their boats and kayaks.

“Our drive is under six feet of water,” Forestville resident Muffy Vasale said. “It’s a lake.”

Vasale and her neighbor Anabella Hernandez said they felt trapped inside their homes and decided to paddle out into the flooded roads on their kayaks.

On Feb. 28, Hernandez said leaving the town would be pointless.

“I can’t get to work even if I escaped [the town],” Hernandez said. “I work in Sebastopol and it’s flooded there as well.”

Bob Pawlan, a Rohnert Park resident, said he helped organize an evacuation shelter at the Sebastopol Center for the Arts on South High Street.

Pawlan said the shelter had 38 people stay, but that number went down to 17 by Feb. 28. He said most of the people who stayed were already experiencing homelessness before the flood.

“There is a transient part of the population here,” Pawlan said.  “They come here to get a meal and a warm, safe, place to stay. They’re from living near the river. So we get a mixed group.”

Pawlan said many evacuees tried to go to their homes during the day on Wednesday only to find that they could not get back and needed to stay in the shelter another night.

He said shelter will be open until at least Friday, but it will remain open if needed.

“We’ve been getting hammered with slides, flooding, trees down.  You name it, we’ve seen it,” Kracke said. “We’re trying to get routes
open, pushing debris here. We’ve got a lot of cleanup to do in the coming weeks.”