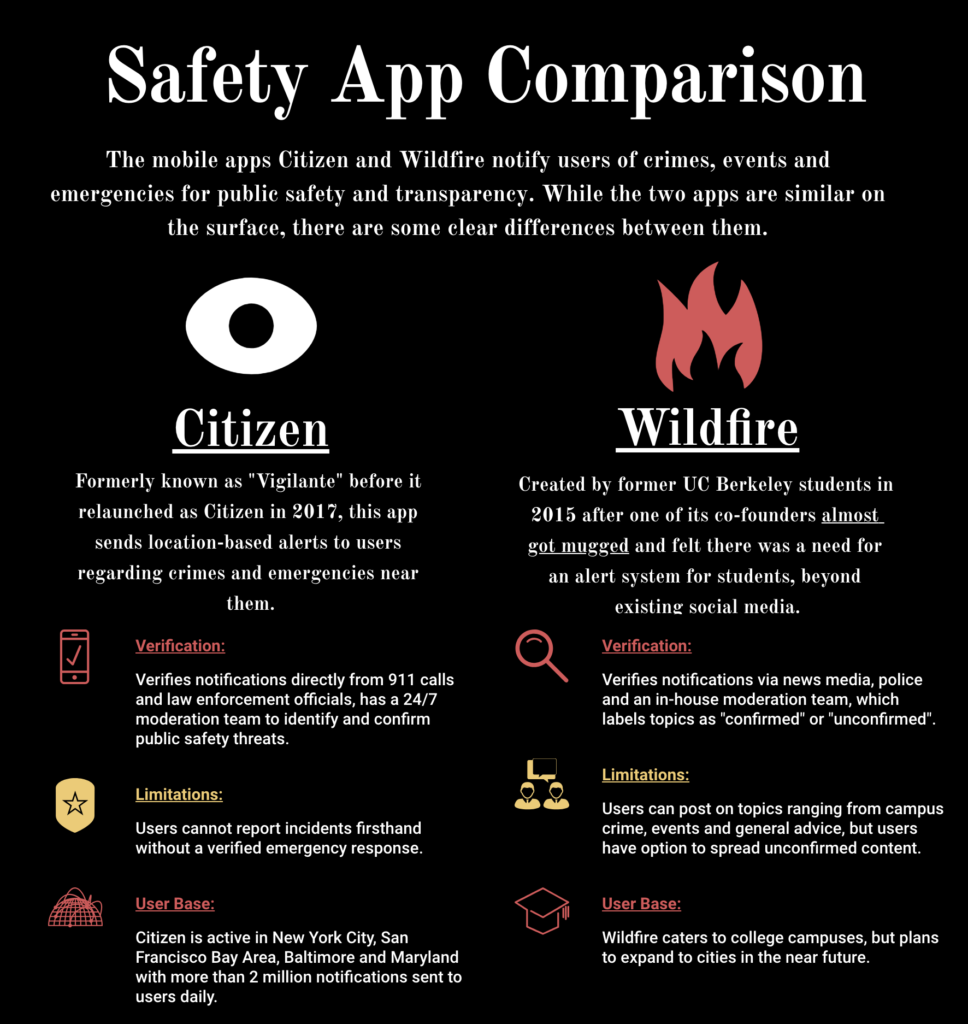 The incident occurred last Monday evening when one person was shot, followed by reports of fireworks mistaken for gunfire and a power outage a couple of hours later. The formal statement on the University website said the shooting victim received medical attention. University police reported there was no active shooter on campus and emphasized there is no current threat to the community.  Without an update from the administration, students turned to an app known as Wildfire for information.

Wildfire is growing in popularity with students as a social media platform that acts as an emergency alert system and an outlet for the latest campus events.

Wildfire co-founder Hriday Kemburu developed the app in 2015 after almost getting mugged near the UC Berkeley Library. He posted on Facebook to warn other students and noticed it got hundreds of views, even by complete strangers. Hriday saw the need for a more effective way to send alerts without being limited to immediate friends and family.

Nancy Nguyen, an SF State cinema major, was in the Humanities Building during the shooting and didn’t know what was going on
until she returned to her dorm.

“I was actually really scared and I didn’t know that it was happening so close until my friend actually pulled out the Wildfire app,” Nguyen said.

Nguyen downloaded the app immediately after the shooting.

The University did not send out an alert when the shooting occurred and only sent a mass email to the campus community almost three hours later.

“I honestly felt really disappointed in the school system,” Nguyen said. “I don’t understand why they didn’t tell [us about the shooting] right away.”

Kemburu told the Xpress via email that Wildfire is not affiliated or working with SF State, although its users must be college students in order to communicate through the app.

“The goal is that we can work with the campus as a more prompt alert system or an ,additional campus resource,” Kemburu said.

He said within minutes of the shooting, dozens of SF State students posted about the incident, which prompted Wildfire to send a
mass notification to thousands of its users.

Kemburu compared the incident to a shooting three blocks from UC Berkeley during Wildfire’s infancy in 2016. When several users reported gunfire on the app, Wildfire sent a notification to 4,000 other people within 1 mile in a single minute. An additional 2,000 users joined within the hour.  According to Kenburu, the university did not send out any notification until the following day.

SF State biology major Montserrat Robles said, while she was shocked to hear about the shooting near SF State, she still feels safe on campus. She said she was unaware of Wildfire and probably wouldn’t download the app since she commutes from San Leandro.

“I’m rarely even here,” Robles said. “I feel like if I lived on campus I would have the app.”

SF State student Matt Ha said he heard about the shooting first from another crime alert app called Citizen. He said the feature he finds most useful about Citizen is its group notification system where you can alert a specific group of your friends when something happens locally.

Citizen received its first report of the shooting at 7:14 p.m. and within one minute posted three in-app updates to keep users informed.
SF State psychology major Elizabeth Alexeyev is an active Wildfire user and said the app reminds her of Citizen, Yik Yak and Facebook
all rolled into one.

While both Wildfire and Citizen provide crime alerts, there are key differences between how the two apps distribute information.

According to Citizen spokesperson Peter Donald, app users cannot post about crimes directly into the app. The Citizen team monitors emergency calls and verifies them before notifying users. Users can then post about an issue once it is validated.

“These incidences have to begin with a 911 call and there have to be units from a first responder agency that are responding to that event,” Donald said.

Kemburu said via email that Wildfire allows users to post when they come across emergencies because vital information is often spread by word of mouth or through friends.

Both apps have moderation teams that mark posts with “confirmed” and “unconfirmed” labels to avoid misinformation.

“Just because a user posts something doesn’t mean it’s true,” Kemburu said. “What we do is use Wildfire push notifications as the moderated and filtered source of truth.”

Kemburu said Wildfire is not releasing the number of SF State users at this time.

“This app has literally helped me avoid bad situations on my way to class or on my way home,” political science major Yamiletzy Garcia said. “I think everyone should get the app.”