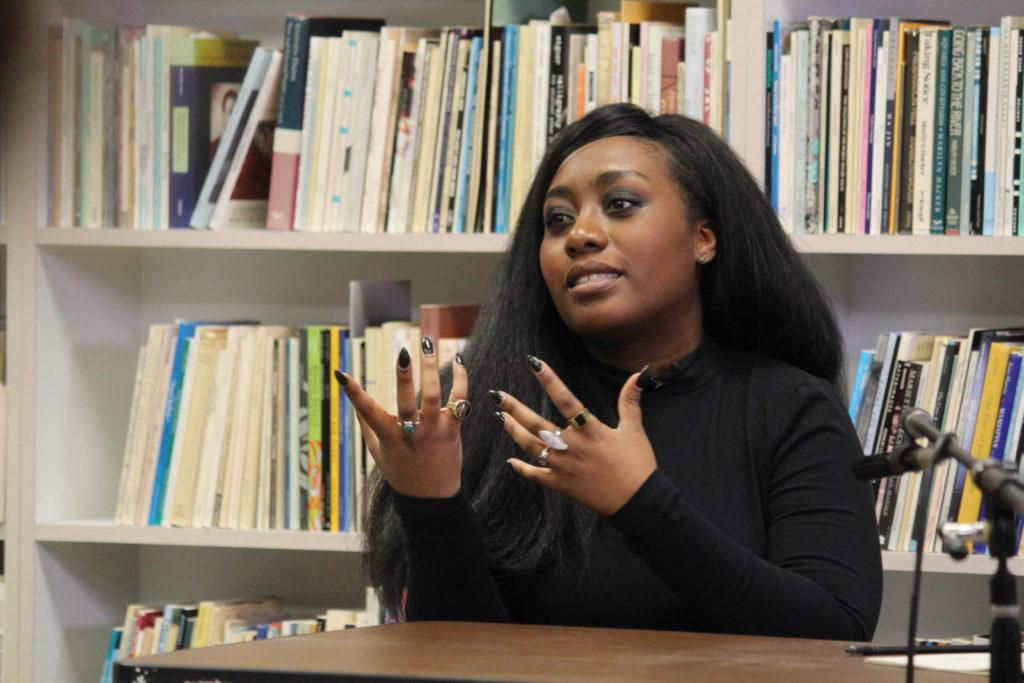 Poet Jasmine Gibson spoke on Feb. 7 and shared her writing on topics ranging from the failures of capitalism to personal intimacy. She stressed that the conversation about Black voices in writing needs to be one that is inclusive and community based.

“Being Black in the United States is based on a lot of things,” said Gibson. “It’s a myriad of things to be Black. It’s based on other people’s voices, not just my voice.”

Jarrel Phillips is a writer and artist who graduated from SF State in 2014 with a degree in child and adolescent development and now educates children through the arts and gymnastics. Phillips believes that poetry not only gives a voice to Black people, but a way to preserve their history.

“Poetry and spoken word is very important to me and for people in general, but for Black people especially. Writing helps champion our stories, it helps preserve our stories and archive our culture,” said Phillips. “It feels good to be able to be able to express your feelings not just to another, but to the world.”

According to Steve Dickison, director of SF State’s Poetry Center, Black writers have influence on language around the world:

“One of the ways in which Black writers have made an incredible mark is to constantly subvert the hierarchies that are built into the language,” said Dickison. “People around the world learn to emulate the way that Black writers use the English language in their own language and poetry is certainly part of that.”

Wilderson III echoed Dickinson’s thoughts during his talk at the Poetry Center and added that the publication of Black culture, voice, and word is still imperfect. He explained, to a rousing agreement by audience members, that Black writers are often being exploited for their popularity by gatekeepers who want to water down their message to make it more commercially sellable. He stated that this inhibits Black writers’ ability to have full artistic freedom to create what they want.

“What people want in this world is Black energy and Black style, not Black thinking,” he said.

Wilderson III shared personal stories of rejection from publishers and having been underpaid for standing by work that was seen as too subversive for publication or even the personal tastes of his editors.

Phillips described how writing and poetry are important means of communication, highlighting the need for free and open expression.

“Poetry is a way for us to express things that we have not had words to tell people about,” he said. “Putting it onto paper is a healing process, it can be a release.”