Keeping up with the Ugbajas 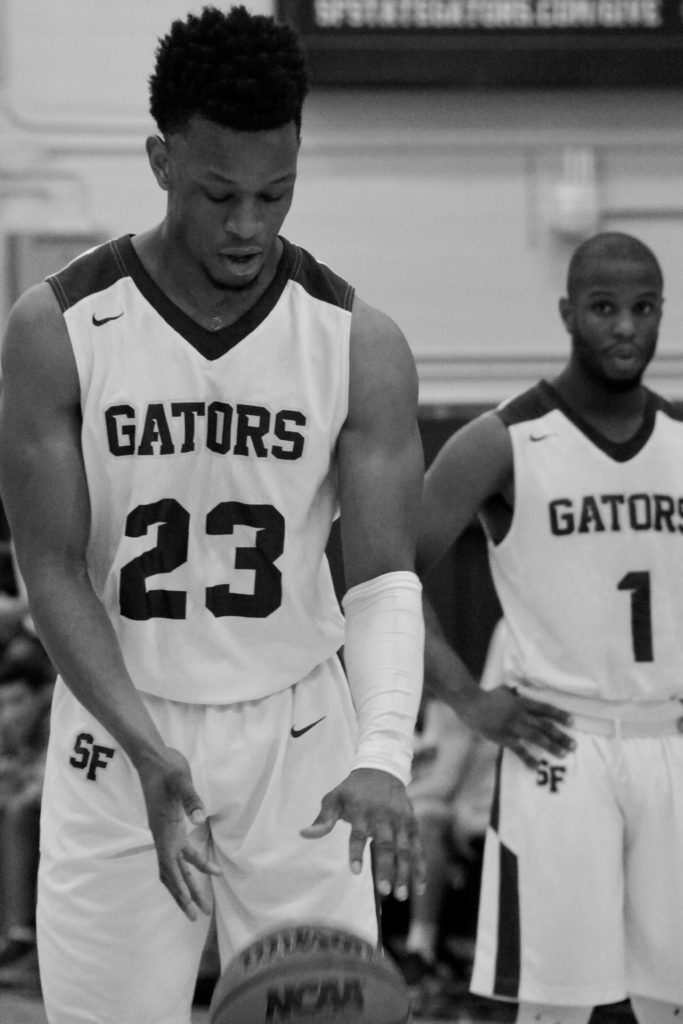 Jiday Ugbaja (23) about to go for a shot as his cousin, Chiefy Ugbaja (1), watches from behind him during a game facing Cal State Los Angeles in The Swamp on Jan. 31, 2019.(SHAYLYN MARTOS/Golden Gate Xpress)

Over the years, the city of San Francisco has produced many athletes and if you’re familiar with local sports, the Ugbaja cousins are two of the latest names on that list.

Jiday and Chiefy Ugbaja are two cousins born just a few months apart and have played basketball their entire lives. They were raised in a Nigerian household and they are one of many past or current collegiate athletes among the Ugbaja family.

From their AAU travel team days to their time at Archbishop Riordan High School in San Francisco, it was clear these two were made to
compete together.

Many spectators watched the Ugbajas play in high school and have continued to attend their games here at SF State, according to Chiefy
Ugbaja. The duo appreciates their hometown and everyone who has supported them along the way.

“At first, we went to different high schools so we started out as rivals and that helped form this connection we have today,” said 6-foot-4 guard/forward Chiefy.  “At this point, our brains click together and sometimes I feel like he’s my twin.”

The two have demonstrated how well they compliment each other on and off the court, but still enjoy competing against each other in
practice or during their free time.  Back in 2013, Jiday participated in the Nike Global Challenge and competed with top-tier athletes
from across the nation and was looking to play division one basketball.

The Ugbajas graduated high school in 2014 and at first took separate routes in college.

Jiday played his first four years of NCAA Division I basketball at Sacramento State and is now enrolled in SF State’s graduate program. He
wasn’t sure if he wanted to play, but that was before he was recruited by Chiefy.

“It was meant to be,” said Chiefy, “when I heard he’s leaving Sacramento State I thought it’d be pretty cool if he came here, but at the end
of the day it was his choice.”

Chiefy redshirted at SF State following his senior year of high school and was named Scholar-Athlete in his first two seasons.

Growing up in The City and attending SF State have been two completely different experiences for the Ugbajas.

“SF State is very diverse. You’d think a lot of people from the city would be going to school here, but I always run into people from SoCal
or out of state and I really enjoy how everyone meshes together,” Chiefy said.

For Jiday the transition back to the city took some getting used to, with San Francisco serving as a bigger city than Sacramento. The Gator’s leading scorer this past season had to adapt his lifestyle.

Even though he’s not on campus that often, Jiday fully embraces what it means to be a student-athlete

“It’s a lot to have on your plate, but at the end of the day, it’s all worth it. Not many people get the chance to have an opportunity like this,” the 5-foot-11 scoring guard said. “Waking up and having to go to class or work is tough, but it’s important to find a balance.”

As their season came to an end, with an upset by Cal State L.A., the Ugbajas reflected on their playing careers and at the time intended to finish
the season on a strong note.

“We wanted to win the league and get a banner,” Jiday said. “We [were] the fourth seed and [believed we had] a great chance of competing in the playoffs.”

Win or lose, the Ugbaja cousins don’t see their basketball careers coming to an end.

Their cousin, Ike Iroegbu, plays for Panevėžys Lietkabelis of the Lithuanian Basketball League and Baltic Basketball League. Iroegbu,
who went undrafted in the 2017 NBA Draft, is also a member of the Nigerian national team.

“Our goal is to keep playing as long as we can since this is the last go around for both us,” Chiefy said.

They plan to continue to improve their game and hope to earn a roster spot overseas, following the footsteps of Gator basketball alum
Brantley Bynum, who currently plays for Denmark’s Randers Cimbria of the Basketligaen League.