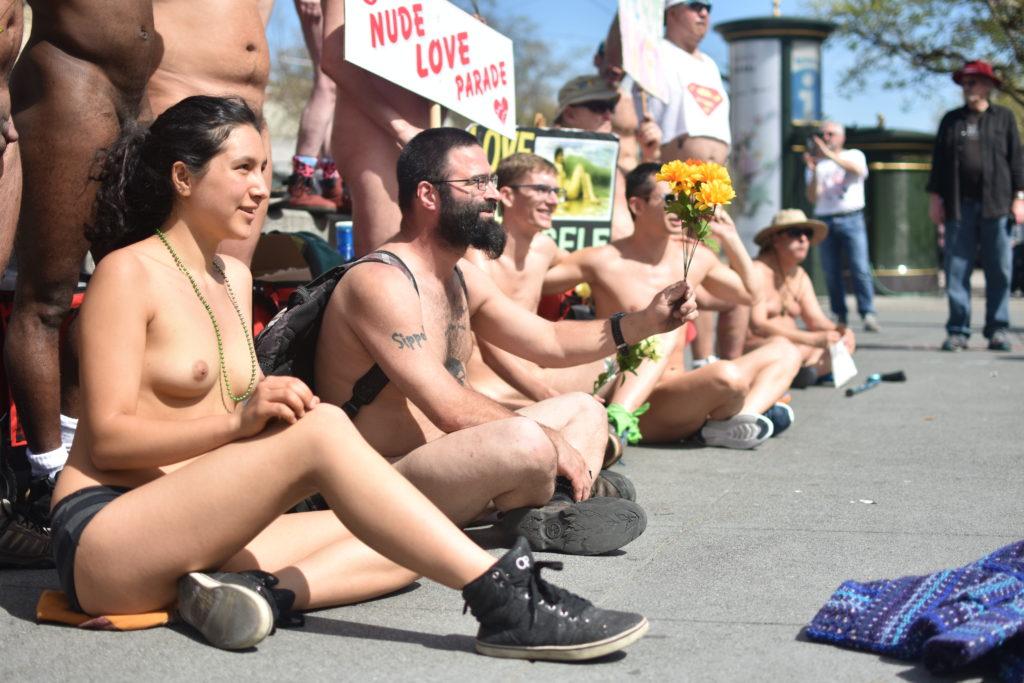 Inti Gonzales (left), daughter of parade organizer Gypsy Taub, sits on the pavement with fellow nudists for the Nude Love Parade at Jane Warner Plaza in the Castro on St. Patrick’s Day, March 17, 2019.

Nudists marched down the streets of the Castro for San Francisco’s fourth annual Nude Parade, with signs hoisted in the air to protest against San Francisco’s public nudity ordinance.

The San Francisco Nude Parade took place at Jane Warner Plaza on Sunday in the Castro district. The San Francisco Police Department ushered parade-goers through the streets of the Castro and Haight-Ashbury districts in an act of defiance against an anti-nudity bill.

“Make Love Naked and Stop the SF Nudity Ban,” read signs that participants carried around in an effort to protest the anti-nudity bill passed by Sen. Scott Wiener in 2012. According to the San Francisco Board of Supervisors, the anti-nudity bill made it illegal for genitals to be exposed in any public space, with the exception of permitted events that are approved by the city and county of San Francisco. Since the bill was passed, nudists of San Francisco have come together to protest in the annual parade.

Gypsy Taub, the 49-year-old organizer of the Nude Parade, feels compelled to protest.

“I’ve been organizing these events for over six years now in opposition to the nudity ban that was forced on the city illegally by Scott Wiener,” Taub said.

Taub believes nudity is part of the culture and history of the Castro district, where she recalls her first time being exposed to public nudity.

“For me, the Castro district is where I first saw public nudity, which was 20-something years ago when I was a student at San Francisco City College,” Taub said. “Back then, they had amazing Halloween celebrations with a lot of body freedom—so beautiful and so much creativity.”

The mother of three encourages her children to partake in this expression of creativity as well.

Inti Gonzalez, 18-year-old daughter of Gypsy Taub, stood topless alongside her mother holding a sign that read “Freedom of Choice.”

Gonzalez feels as though nudity is more difficult for her to embrace at times.

“In my house it was considered fine, and then outside in society it was not, so I still have shame about it and it’s still even hard for me to go topless,” Gonzalez said.

Gary Smith, long-time attendee of the annual Nude Parade and active nudist, feels empowered by his decision to go nude.

Taub sees the Nude Parade as a way for members of the LGBTQ+ community to embrace breaking away from societal expectations.

“The gay culture, those were the people who broke loose from the chains,” Taub said. “It takes courage […] to step out of your comfort zone and go against societal norms.”