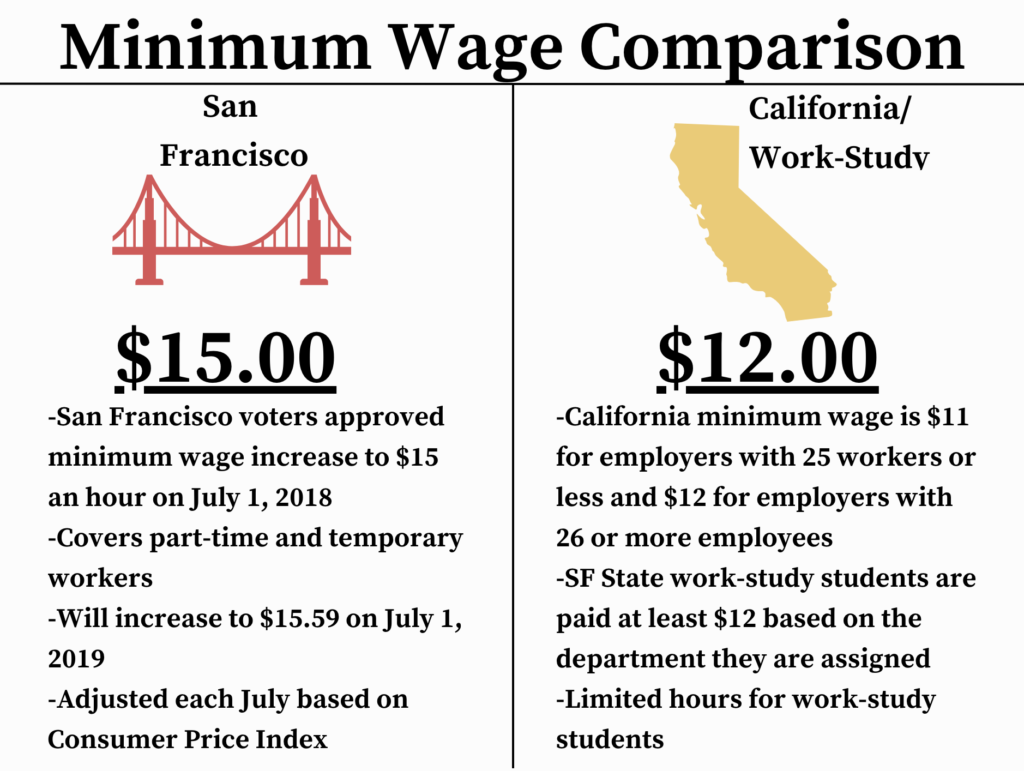 The minimum wage in San Francisco will increase from $15 an hour to $15.59 by July 1, while SF State work-study students are only paid $12 an hour despite the rising cost of living in the Bay Area.

Students participating in the work-study program have flexible hours and the convenience of working close to campus. Job duties range from sitting at a desk helping students at J. Paul Leonard Library to supplying sports equipment at the Mashouf Wellness Center.

“It’s really relaxed, the job isn’t too strenuous and the staff scheduling really makes an attempt that your school schedule and your work schedule are really in sync,” said Andrew Pannell, 24, a fourth-year finance and broadcast and electronic communication arts double major who works at the library
help desk.

While the academic benefits of work-study may serve students well, their paychecks fall short of the $15 an hour minimum wage in San Francisco.

Work-study students are paid once a month and cannot work more than 20 hours a week.  However, not all positions meet that criteria, according to SF State spokesperson Mary Kenny.

“Student employees at SF State are paid the California State minimum wage of $12.00 per hour. Most students are paid more than that– each department sets their own compensation rates. Students do not receive sick or vacation time,” Kenny said.

Bay Area household incomes have not kept up with living expenses, which has increased by 88.4 percent between 2000 and 2015, according to the Bay Area Council Economic Institute.

Rather than going through the stress of helping numerous patients throughout the day, Dasalla peacefully works at the front desk
of the library’s computer lab.

“Working here, it’s very simple, more calm. I get to do homework here and there whenever its not busy,” Dasalla said.

“It’s very convenient. I live near campus and after class I can just swing by and start working,” Phan said.

While most students said work-study was a positive experience for them, some said they were frustrated and disappointed with the
program.

“[Work-study jobs] are not worth it unless you’re looking for a part-time job to have some spending money for a night out with friends,” said Alfredo Garduno Hernandez, 20, a second-year business major who works as a tutor and referee for the campus’ intramural soccer league.

“I ref at the Mashouf for men’s soccer and we have students yelling at us for the calls we make. We get cussed out or called names because we play ‘favorites’ or ‘we don’t know how to ref’, but we get training every semester,” Garduno Hernandez said. “The $13.25 they pay us isn’t worth it.”

Not all positions on campus qualify as a work-study position. For example, students working at Taqueria Girasol in the Cesar Chavez Student Center are not part of the program. Taqueria Girasol employee Gabi Ballesteros, 24, earns $15 an hour compared to the $12 an hour work-study participants
receive.

“I used to do work-study back in the day. I’ve been here since 2013, and now I’m doing my master’s. I used to get paid $8 when I worked for athletics and the minimum wage was $10,” Ballesteros said.