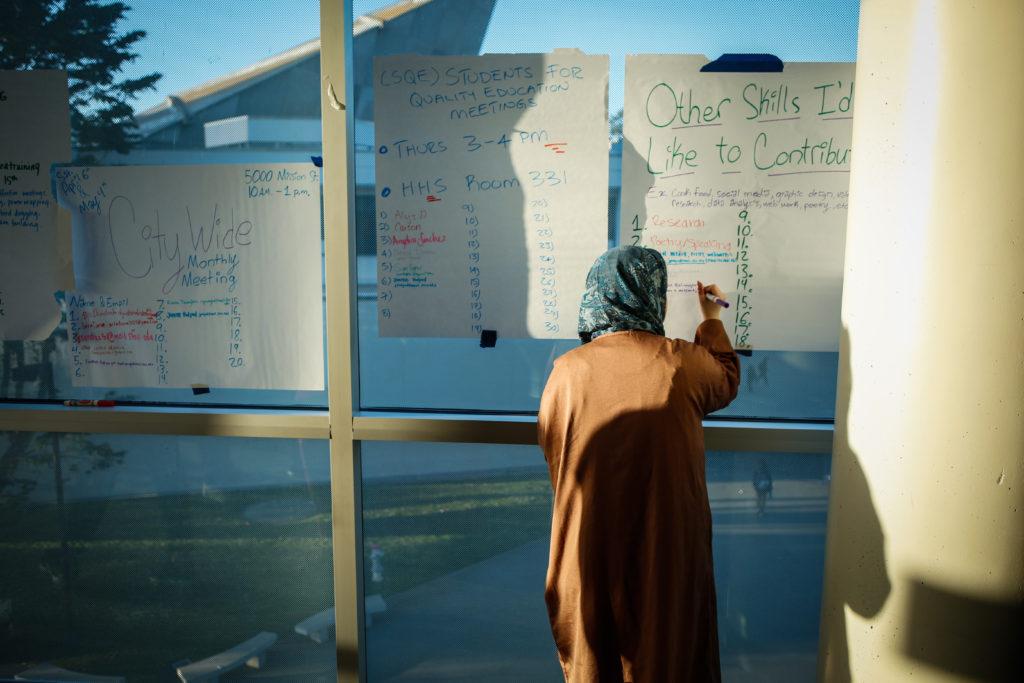 A statewide coalition to initiate free public college has taken college campuses by storm as SF State and local grassroots organization SF Rising presented a teach-in on March 12 at J. Paul Leonard Library to educate students on the campaign.

The “College for All” movement is bringing organizations throughout California together to rally in support of placing a measure on the 2020 primary ballot to provide free public college to California residents. Many SF State students, including those from organizations like Students for Quality Education and Young Democratic Socialists of America showed support last week at the event.

The campaign is an act to revive a previously failed push to place a similar measure on the 2018 ballot, and the new campaign seeks to gain legislative approval or gather 700,000 signatures in a matter of six months to get it on the ballot.

“College for All” mobilizes around the idea that a 0.2 percent estate tax imposed on the wealthy could cover the cost of making education free for all of California’s public colleges. According to SF Rising field organizer Celi Tamayo-Lee, this tax would raise $4 billion, which would cover tuition, housing and excess fees for all University of California, California State University and community college institutions for undergraduate students.

SF Rising member Connor Watson is a former SF State student who left college after his federal financial aid through FAFSA fell through. Watson says that although the amount of support “College for All” must gather to put the measure on the ballot is high, his past campaigning is a testament to the power of community members coming together.

Watson took part in the initiative to instate free education at San Francisco City College for San Francisco residents. The free SFCC campaign called for a real estate tax to fund tuition and Tamayo-Lee said the it raised double the necessary funds.

Watson said free education at public colleges is not a radical idea.

In documents submitted to the California Attorney General proposing the “College for All” act, proponents of the initiative cite statistics that show tuition and fees in UC and CSU systems have increased by over 300 percent since 1992.

Tamayo-Lee noted that they had family members who paid tuition-rates a student in 2019 couldn’t imagine.

“My dad paid around $90 per semester here, and he graduated in the 70s,” they said. “When my aunt went here it was literally free.”

The discussion at the “College for All” teach-in centered on the problems caused by the dramatic tuition increase, including the significant contingent of students who are unhealthily overworking themselves, the way the education system is now run like a business and the fact that issues with FAFSA and university financial aid have seemingly become normalized.

Sam Tepper, a YDSA member, said his club supports “College for All” and  said removing money from the equation when it comes to education would allow students to make more considered decisions about their futures.

“The struggle I face in college is deciding what I want to do and the pressures of time and money and how that affects what I want to decide,” Tepper said. “I don’t want to make a rushed choice and if college was something that was free I think it would eliminate that stress.”

Members of SQE agreed that pressuring and overworking students is normalized in the current education system. The leader of the group, Amaro Rivera, sees students suffering from the wear and tear of juggling work and school.

“Two of my professors in other classes have had to stop class and ask us if we are okay, physically and mentally, because they see the drain and the toll that literally going to school is taking on students,” Rivera said. “When your professors are stopping lectures to ask you if you are okay, that’s when you know that they’re starting to see the effects of this chaos and this drainage that’s happening to us.”

Rivera said they believe that free education could relieve some of the physical and emotional labor students endure.

Alyssa Tolentino was another student who attended SF Rising’s campaign event, and she said free college would offer relief to her in ways that go beyond tuition.

“[Free college] would help me in the fact that not only your tuition would be paid for, but also all the housing,” Tolentino said. “It would make life a lot easier.”

Tamayo-Lee said partnering with students involved with organizations like SQE and YDSA at SF State is central to the success of campaigns like “College For All.”

“Students have been the front of social movements for a long time,” they said.

Tamayo-Lee said that in alleviating many of the financial hardships students face, free college would also improve student performance, success and enjoyment of learning.

“If college was free and students had more time to actually learn the material rather than just read a chapter here or there, I think they would be getting more out of their education,” they said. “[And] if we can do this in California, it sends a very clear message to the rest of the country.”