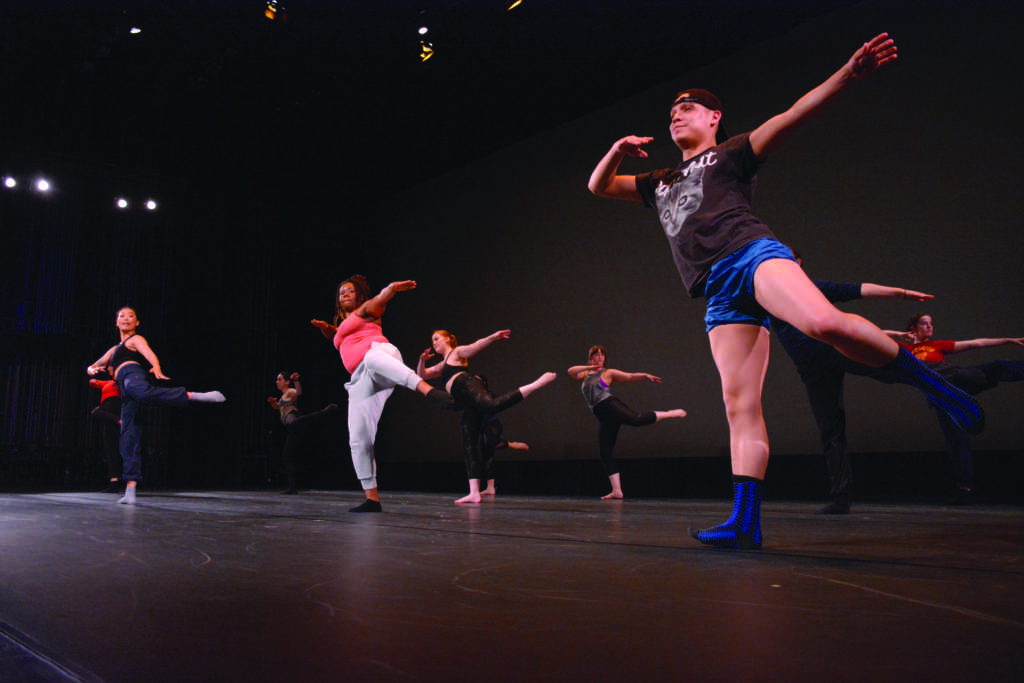 University Dance Theatre goes through a dance to warm up before its opening night on Thursday, April 4th at the Mckenna Theatre. (TRISTENROWEAN/ Golden Gate Xpress)

University Dance Theatre goes through a dance to warm up before its opening night on Thursday, April 4th at the Mckenna Theatre at SF State. (TRISTEN ROWEAN/ Golden Gate Xpress)

Unlike the student-run production last year, this year featured six dance pieces choreographed by both faculty and students. The production ran each day from April 4 to April 7, with performances at 7:30 p.m.

Katelyn Dallke, a 20-year-old SF State student dancer, danced in “Malong” and said the dance’s incorporation of fabric was intended to symbolize the movement of weaving.

“At first, we started off with just movement,” Dallke said. “Three months later we added the fabric in and then we went off of the choreographer. . . and we were able to change it.”

She said she collaborated with professors to make UDT more productive and enjoyable than in past years.

“There have been years where the professors don’t really take opinions [from] the dancers, but this year was very different,” Dallke said. “It was all professors and choreographers working together.”

“It started off with really primitive movement,” Luu said. “Then I thought about evolution and growing into cavemen and then humans and then I started thinking, ‘How am I going to connect all of these together?’ and I thought of one word—and it was survival.”

Luu worked to connect “The Descendent of Humankind” to the dance piece she choreographed for last year’s UDT production, which centered around emotional abuse. She said she received help choreographing the dance from her professors.

“Faculty has taught me everything I know about choreography so far,” Luu said. “They always push us to find our own creative way of working.”

“Some faculty take creative liberty and often come up with choreography on the spot,” Luu said. “Others like to work closer with the students and allow the students to have input in the movement.” Luu said dance professors provided a healthy balance of critique and creative freedom to guide her.

“Faculty [gave] me many critiques week after week when I was creating my piece,” she said. “This helped me solidify my ideas and bring them to life.”

Dallke said being a part of “Mad Brass Redux” and learning this particularly whimsical piece was a different process because students collaborated with professionals on the choreography rather than just professors.

She said that, the professional dancers, Garrett and Moulton, did not allow students the freedom to change their choreography.

“We weren’t able to change the choreography at all,” Dallke said. “Yes, our personalities will come out in the movement. . . but we can’t drastically change the movement.”

Nguyen said her favorite piece to work on was “Mad Brass Redux” because she performed in the original cast when it premiered in the summer of 2018.

“We had to rework all of the different elements of [the choreography] to fit from a 21-person cast to a 13-person cast,” Nguyen said. “So that was a fun and interesting process, and it’s been quite challenging to have to give so many people parts—it’s challenging, but it’s rewarding.”

An earlier version of this story referred to student dancer as “Kately Dallke” when her name is correctly spelled “Katelyn Dallke.” Xpress regrets this error.