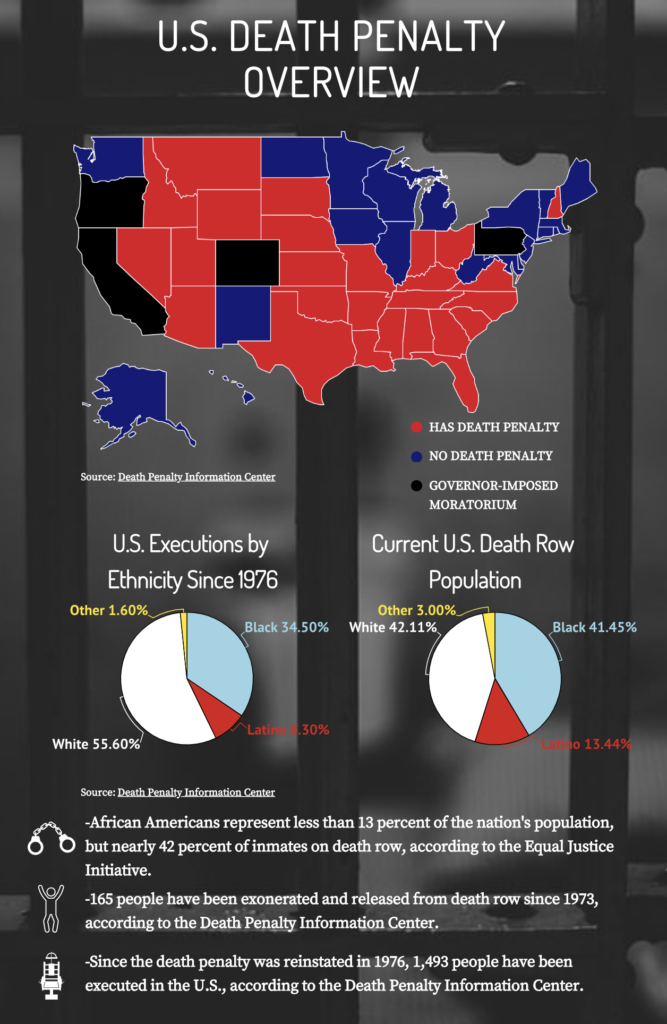 Gov. Gavin Newsom halted the death penalty on March 13, granting a reprieve to 737 inmates on death row while closing San Quentin State
Prison’s execution chamber and calling for an end to the state’s lethal injection protocol.

Newsom’s executive order placed a moratorium on the death penalty. California spent $5 billion on capital punishment and executed 13
people since 1978, with the last state execution performed in 2006, according to the governor’s press release.

Abundis said the death penalty should be removed since no one has been executed in 13 years.

“People have just been piling in on death row and remaining stagnant, so you can only imagine what those inmates are going through and experiencing,” Abundis said. “[They’re] fighting for their lives so that they don’t get executed.”

Newsom recalled a conversation he had with lawyer and social justice activist Bryan Stevenson during his announcement last month in which Stevenson said, “It’s not a question of the death penalty and whether people deserve to die for their heinous acts, it’s a question of whether
we have the right to kill.”

Newsom said he doesn’t believe society has that right.

“If you rape, we don’t rape. I think if someone kills, we don’t kill. We’re better than that,” Newsom said.

“Some could have been falsely accused,” Abundis said. “Somebody could have actually deserved their sentence, but none of us will actually know what’s going through their minds while [they’re] trying to be rehabilitated.”

Around 54 percent of Americans are in favor of the death penalty for murder, while only 39 percent are expressly opposed to it, according to
a 2018 Pew Research Study.

Death Penalty Focus is a non-profit organization based in San Francisco committed to eliminating the death penalty. DPF spent decades “highlighting the problems with the state’s death penalty system—its racism, its classism, how it forces victims’ families to relive their trauma
over and over again in courts and in front of the media,” according to DPF Senior Advocacy Director David Crawford.

Crawford said he is hopeful that the decision to halt the death penalty will become a permanent law.

“The electorate is becoming younger, more diverse and more informed about the [harm] mass incarceration has caused to our communities,
particularly poor working-class communities of color,” Crawford said.

DPF staff said they were pleased to hear about Newsom’s decision. Last year they launched a campaign asking former Gov. Jerry Brown to
take similar action, but were unsuccessful.

“With nearly 740 people on death row, the system is so clearly broken,” DPF President Mike Farrell said in an email. “It’s time to start fixing
the problem. We appreciate the thought and care that went into this decision.”

“There are almost 740 men and women on California’s death row. Do death penalty supporters really believe the state should kill 740
men and women?” Delucco asked. “If we killed one a day it would take two-plus years to execute them all. Does that sound like something a civilized society would want or would do?”

“This system is broken. This barbaric punishment has no place in a civilized society,” Delucco said.