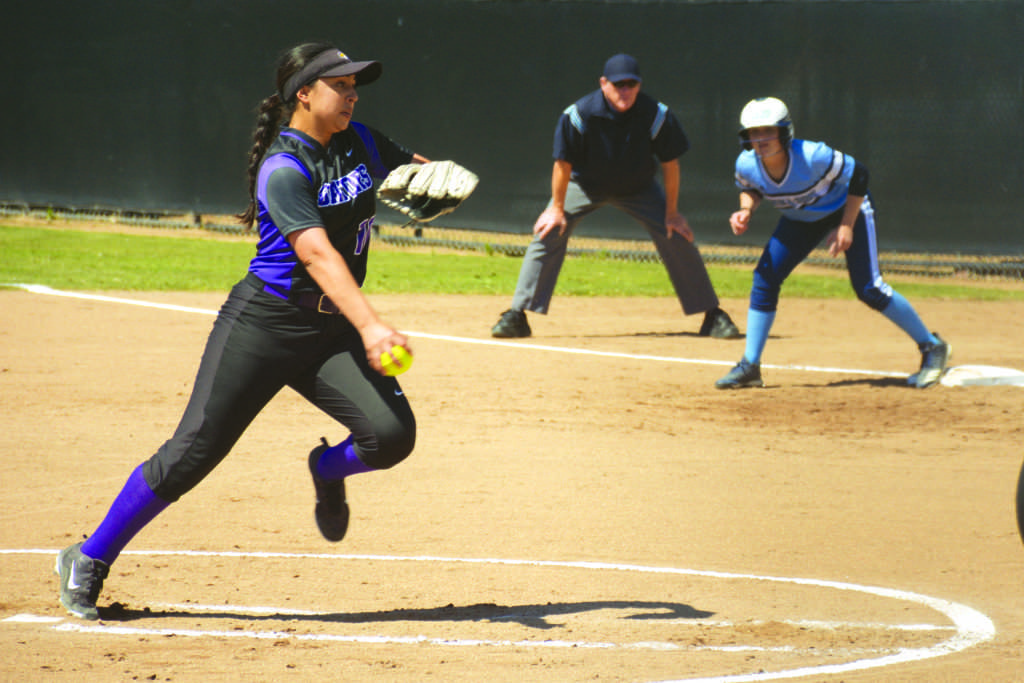 SF State softball improved to 29-16, the sixth-best record in program history, with eight games remaining in the regular season after winning three of four games against Cal State Monterey Bay this weekend.

The Gators won their first of two weekend doubleheaders against the Otters on Friday, April 12, winning game one 4-3 and game two 7-1.

Utility player Michelle Castro was key to both victories, notching a two-run double in the first game to give the Gators an early lead. She then followed it up by going 2-for-4 with two RBI in the second game.

The first game of the doubleheader went down to the wire, as the score was locked at 3-3 through seven innings.

The Gators took advantage of Otters’ starting pitcher Hayley Fein’s high 135-pitch count and loaded the bases in the bottom of the eighth before freshman infielder Lehua DeLeon knocked in the game-winning RBI on a single.

SF State dominated in the second game, thanks in large part to pitcher Karla Soto, who tossed a complete game in addition to her three-inning save in the first matchup, allowing just one run.

“I was just keeping it low, Soto said. “I was hitting my locations. I think I missed one location and that’s the run that came in. I think I was just really hitting my corners today.”

“Karla pitched a great game,” SF State head coach Alicia Reid said.  “To come in and relieve at the end of that first game and then come in and
pitch a full seven is not easy. She just beared down, dug deep. At the end of the game, she was getting a little bit behind, but she had trust in our
defense to make the plays and get the outs.”

Both ends of Saturday’s doubleheader required in extra innings to declare a winner.

The first tilt was good for the Gators ninth-straight win, the longest streak in nearly 15 years. SF State won 11-straight games in 2005.

The Gators went with the same pitching duo as the day before, Emily Mitchell took the mound to start game one, and Soto came in to relieve. “Emily and Karla are both bulldogs, both can go the distance,” Reid said.  “We’ve leaned on them to come in, and they know that they’ve got a great defense behind them that they can trust.”

After giving up one run in the first, Mitchell didn’t allow another run until the sixth inning. The Gators would tie the game in the bottom half of the first after Castro slapped a single to center field, stole second, and reached third base on the throw. Infielder Nina Revior would
bring Castro home on an RBI single.

The Gators led 3-1 before the Otters tied the game at three with a two-out, RBI single from Courtney Hennings in the seventh. It would be another five innings before either team would plate a run.

In the bottom of the 12th, shortstop Hayley Nunes led off with a single, and Castro was plunked putting runners on first and second with no outs. Revoir laid down a sacrifice bunt to move the runners over and Nunes scored on an errant throw from the Otters, for a 4-3 win.

In game two, the Gators and Otters exchanged blows through the first four innings, with SF State edging 5-4 heading into the fifth. The crack of the bats went silent for a few frames and game two looked destined to end in the Gators’ favor, until the Otters tied the game late in the
sixth inning on an RBI single from Shaye Felix.

After two quiet innings from Mitchell in relief, the Otters took advantage of three SF State errors in the ninth inning, defeating the Gators, 7-5.
“Even after this loss, I know we’re going to be on fire,” Soto said. “Our goal is to sweep, to finish strong and make it to postseason.”