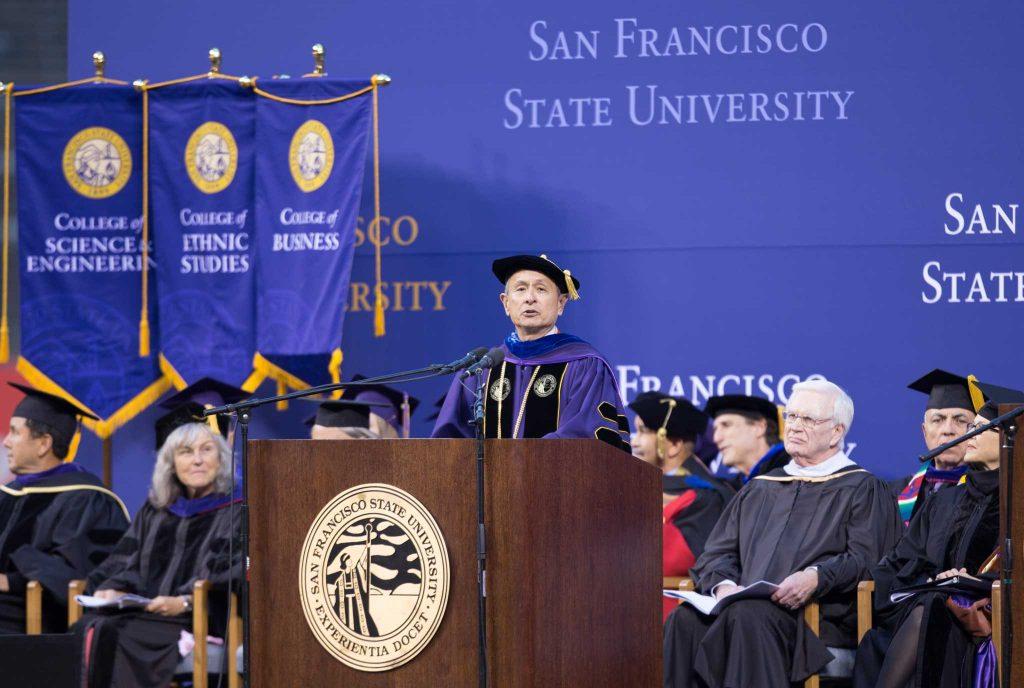 The cost to graduate from SF State is higher than many other CSUs and this and the tedious paperwork has left many students dissatisfied.

Graduates are often glad to finally end their academic journeys, but the process can put a damper on what should be a triumphant occasion.

According to Assistant Vice President for Enrollment Management Maria Martinez, the money goes toward the cost of printing a diploma and paying for the University’s graduation ceremony at Oracle Park, which many students opt out of anyway.

The Giants Enterprises website, which advertises rentals of the ballpark, lists the cost of renting the field at $40,000.

In addition to the $100 graduation application fee, the school charges a $5 late fee and, if there are any errors on the application or it is denied, students have to reapply and pay the $100 fee again.

“Thankfully I got [the paperwork] right the first time around,” said marine biology and bio-chemistry major James Lee, who graduated in the fall but will walk this spring.

“Paying $100 is too much,” Lee said. “I don’t know what the school does besides check that [the paperwork] was filled out correctly that justifies me putting in that much money.”

Martinez said the University doesn’t offer assistance for the fee, either.

“This fee is not part of the financial aid package, which is awarded at the beginning of the academic year,” she said.

Liberal studies major Karissa Alum, who will walk in the spring, said the additional obstacles to graduation create an unnecessary burden.

“It’s agonizing and stressful to fill out,” she said. “If you misplace one thing you could not graduate.”

Students applying for graduation must complete a form that includes a list of all their classes and the grades they were awarded. This is something students must do by hand—an official transcript is not adequate.

The application is reviewed by the chair of the department from which the student is graduating and a faculty advisor.

“If you make one typo, they should be able to just look at it and call or email you and fix it,” Lee said. “Things like that should be taken care of that way, we shouldn’t have to reapply.”

Biology major Holly Caintic said she thinks the costs for graduation are not that bad.

“In my opinion, if you want to just order the basics you don’t have to spend a lot on graduation,” Caintic said. “The rest is miscellaneous items.”

The basics, or bare minimum, are the application fee, and graduation attire, which students who attend commencement at Oracle Park must wear.

For bachelor’s degree graduates, a gown, cap and tassels cost $45 and students must return the gown. For those receiving master’s degrees, the cost is $70 and includes a hood, which students return with their gown.

The miscellaneous items are things typical of a graduation celebration. For example, the University charges $40 for a purple flower lei and offers flower bouquets for $30 or $40. SF State also markets diploma frames that range from $99.95 to $129.95, along with other branded memorabilia.

Students are allotted seven tickets to distribute to family or friends to attend the Oracle Park ceremony, but if they have more than seven guests they’re out of luck unless they can find another graduate with spare tickets.

Many departments hold their own graduation ceremonies that are less expensive and some students opt to attend those instead of the Oracle Park ceremony, despite that their application fee pays for it.

“I’m going to attend the Estuary and Ocean Science Center ceremony instead of going to [Oracle] Park,” Lee said. “It’s free and they have caps and gowns ready to go.”

Lee said at Cañada College in Redwood City, where he transferred from, students didn’t have to pay for caps and gowns if they were on financial aid and wrote a note to the president’s committee explaining they couldn’t afford it.  Such students were permitted to borrow a gown at no charge.

“It’s really off to me that we have so many low-income students and [the University is] asking for this extra ounce at the very end,” he said. “Other schools out there could come up with ways to make it less costly for students that couldn’t pay, there’s no reason SF State can’t do the
same thing.”