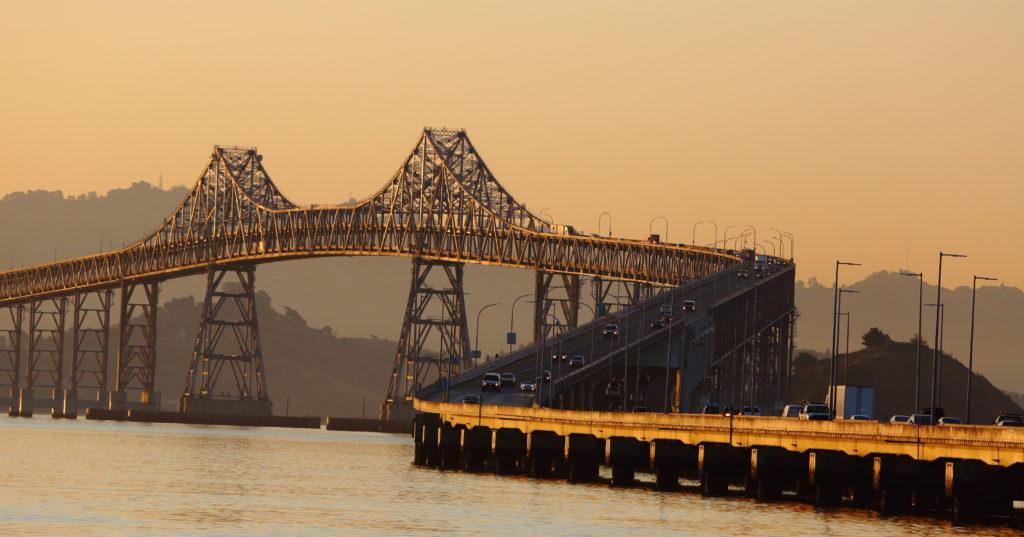 Cars cross the Richmond-San Rafael Bridge on May 14, 2014. (Photo by Don McCollough from Flikr.)

Cars cross the Richmond-San Rafael Bridge on May 14, 2014. (Photo by Don McCollough from Flikr.)

Reports of falling concrete from the Richmond-San Rafael Bridge’s upper deck stalled traffic for the third time in less than two months, prompting some officials to consider replacing the bridge entirely.

The first time concrete pieces broke off from the upper deck of the bridge, they hit a car on Feb. 7 and forced authorities to shut down
both directions of traffic for hours before reopening them. Then more concrete fell on April 5 as Caltrans was repairing the bridge, resulting
in a partial lane closure.

Most recently, a driver traveling eastbound on the Richmond-San Rafael Bridge claimed two baseball-sized chunks of concrete struck their windshield on April 12, according to CHP Officer Andrew Barclay.

“Like the bridge itself, my confidence in the structural integrity of the Richmond-San Rafael bridge is falling,” Levine said. “Band-aid fixes
are no longer enough.”

Abolhassan Astaneh-Asl, a UC Berkeley professor emeritus of civil engineering, said the lightweight concrete used for the construction of the bridge in the 1950s is obsolete and brittle. As vehicles drive over the bridge expansion joints, the concrete gradually shatters from the
pressure.

“Trucks are the ones that cause [this] kind of damage. They are heavy and the impact of a truck on the expansion joint is very serious,”
Astaneh-Asl said.

He said Caltrans should have placed protective netting under the expansion joints the first time concrete fell in February.

“Instead of dropping on the lower deck on cars and the public, those pieces of concrete [would] drop inside this net,” he said.

He said without a short-term solution, the bridge’s problems can also harm the livelihood of thousands of people stuck in traffic.

“This has a serious economic impact, and of course the danger to public safety is another thing you cannot put a price on,” Astaneh-Asl
said.

Metropolitan Transportation Commission spokesperson John Goodwin said the budget for Richmond-San Rafael Bridge maintenance is set at $80 million for the next decade, but funding for new decks or a replacement bridge is not so certain.

“The amount of concrete we want falling from one deck to the next is zero,” Goodwin said. “The bridge is coming up on 65 years old and it’s
showing its age.”

The Richmond-San Rafael Bridge cost $66 million when it opened in 1956, according to the MTC. Goodwin said replacing the entire bridge could easily cost billions of dollars.  “Constructing a new span while you already have a bridge there is really, really tricky and that will add
to the complexity,” Goodwin said.  “It will add to the length of the project [and] it will add to the expense.”

Richmond Mayor Tom Butt made an April Fools’ Day joke warning that the Richmond-San Rafael Bridge would be closed indefinitely because it is “literally falling apart.”

Butt said he was not surprised when more concrete fell from the westbound deck of the bridge four days later.

“What we’re seeing is not a one-off deal, it’s going to be the new normal for a long time,” Butt said. “They’ve had problems with the bridge for decades.”

Butt supports the bridge replacement proposal and said he would like Caltrans to take more responsibility in preventing these incidents.

“It’s something that Caltrans needs to start dealing with right now and, as far as I know, they’re not doing it,” he said.