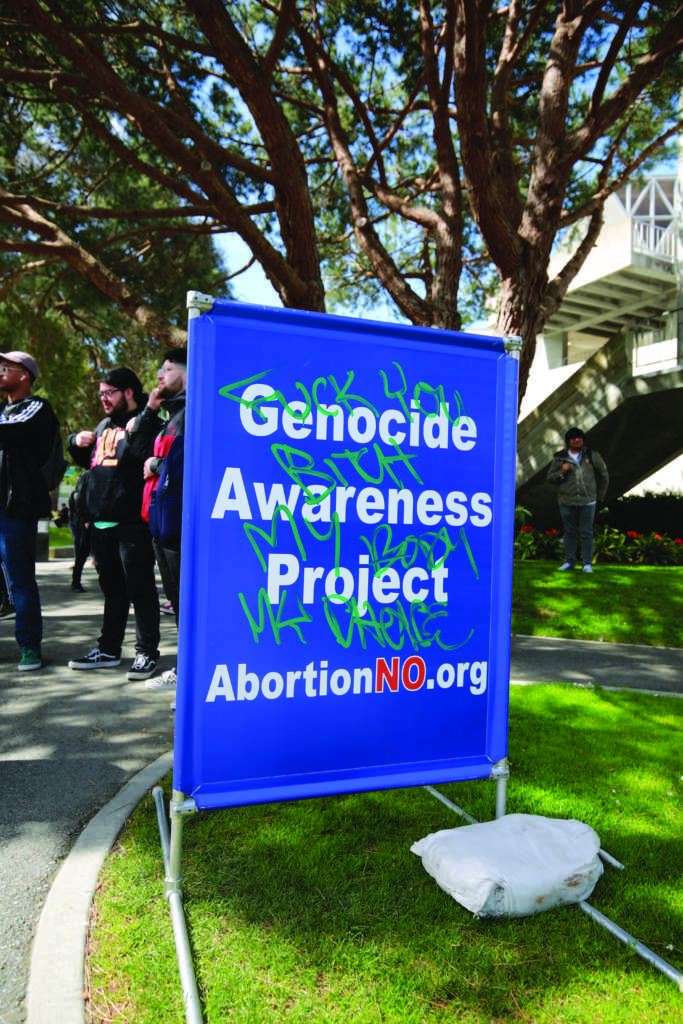 A Genocide Awareness Project sign with the words “Fuck you bitch my body my choice,” scrawled on it in front of the Cesar Chavez Center during an anti-abortion protest on Monday, April 15, 2019.(JAMES CHAN/ Golden Gate Xpress)

A Genocide Awareness Project sign with the words “Fuck you bitch my body my choice,” scrawled on it in front of the Cesar Chavez Center during an anti-abortion protest on Monday, April 15 2019. (JAMES CHAN/ Golden Gate Xpress)

Abortion is not genocide, and people who claim otherwise are ignorant about its definition.

The United Nations defines genocide as the intentional elimination of groups of people by killing, imposing societal conditions, preventing birth rates within a group or stealing children to another group. These groups of people are defined by nation of origin, religion and race.

Depicting abortion as genocide is disingenuous because it is not intended to destroy a specific group of people. A large and diverse group of people choose abortion for numerous reasons, including that they were victims of rape, cannot afford the cost of raising a child or decide they don’t want children.

A group of anti-abortion activists with Project Truth, Genocide Awareness Project and the Center for Bio-Ethical Reform incited a student-led counterprotest on campus Monday.

This group of about 10 Evangelical Christian activists wore GoPros and stood behind a retaining fence set up in front of the Cesar Chavez Building under the supervision of University police officers.

Large signs behind them displayed graphic images of holocaust victims, black men being lynched and aborted fetuses—claiming abortion is equivalent to genocide.

These conservative Evangelical organizations travel to campuses nationwide with cherry-picked images and words plastered on large displays under the guise of anti-abortion activism and human rights.  Their motives, however, don’t seem to be rooted in spreading awareness. How does setting up fences and recording shouting matches with students help anyone?

It is more likely their motive is to incite student protests so they can create and share videos on social media to reaffirm their “righteous cause” while depicting college students as hateful and ignorant.

It is hypocritical to depict themselves as brave activists spreading understanding when they refused to provide Xpress reporters or photojournalists with their full—or real—names.

One of the conservative activists said his name was William Wilberforce, who in actuality is a British politician, abolitionist and philanthropist from the early 1800s. Through a quick Facebook search, the Xpress found out this demonstrator’s real name is Don Blyth.  Blyth and other anti-abortion activists fail to consider the context of life outside of their privileged bubbles.

Abortion is the only option for many people.  Many people who go to SF State cannot afford to raise a child while working two or three jobs
to pay for a place to live, commute to class and pass their 12 to 15 units of classes.

Expecting these students to raise a child, even in the case of rape, despite the societal conditions in which they live, is ignorant and hateful.

A better use of time and space would be to work toward creating a stronger social safety net for the millions of families with children
they struggle to support and the over 400,000 children in foster care.

According to 2016 data from the National Center for Children in Poverty, there are more than 72.4 million children under age 18 in the U.S. and 41 percent of them live in low-income households.

Furthermore, why not denounce police brutality, the prison-industrial complex, child imprisonment at the Mexican border or bombings of other countries, instead of trying to shame women for choosing to take agency over their bodies?

It’s because they don’t care about marginalized, low-income communities, women or people of color. These organizers are not abolitionists like they claim. All they care about is spreading their own twisted narrative and feeling as though their actions are driven by justice.

The University knew about this event weeks in advance, and it is sanctioned until Wednesday despite student-led protests.

The Xpress supports the student action against this spread of misinformation, hate and false analogies.

But do not mock, berate or lash out despite the disgusting content of their message, lest you give these despicable provacateurs what they came for. We urge students to stand in peaceful solidarity to show ignorance and hate are not welcome and send these fauz activistis home disappointed.