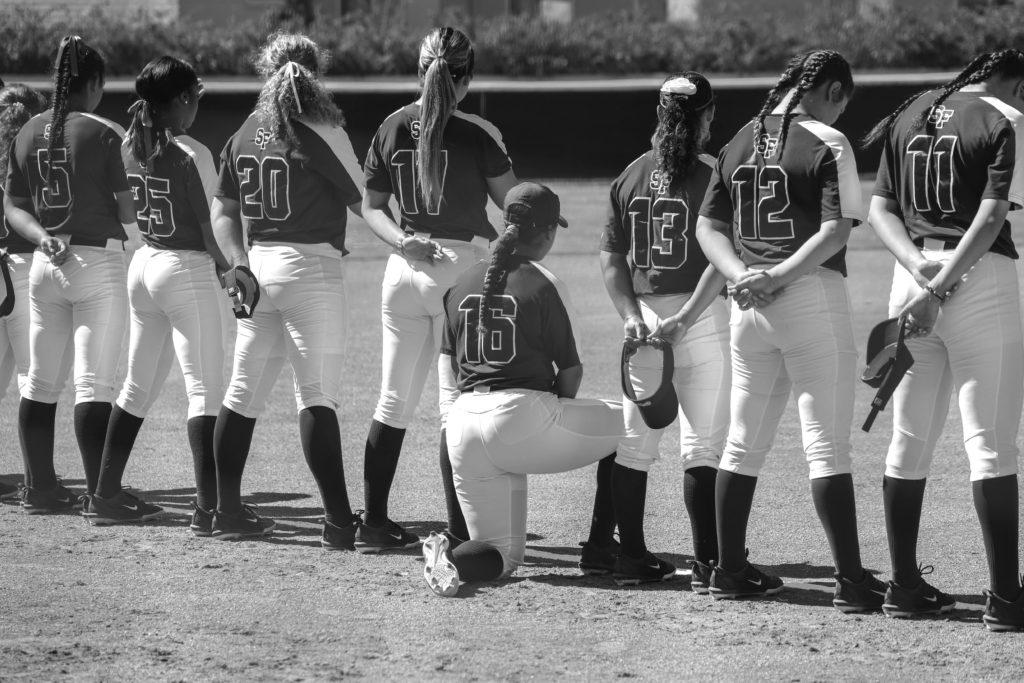 For Tianna Jacques, the SF State softball player who routinely takes a knee during the national anthem, it’s how she shows she stands for something bigger than herself and expresses her opposition to police brutality and unjust violence against African-Americans in the United States, continuing the protest started by former 49ers quarterback Colin Kaepernick.

Jacques started taking a knee during the national anthem after watching Kaepernick kneel in her freshman year of high school.  Although she hasn’t gotten any direct criticism for her actions, she’s noticed a number of other athletes get admonished for it.

“The football team in my high school [took a knee] and they got so much backlash,” Jacques said. “I felt bad because I knew those kids taking a knee and those were my friends. They were standing for something bigger than them and people can’t even
conceive that.”

A few years have passed since the media frenzy surrounding athletes kneeling during the national anthem in NFL games, but Jacques believes the message behind the protest is as relevant as ever.

“Just because it’s not mainstream doesn’t mean it’s not happening,” she said. “We always talk about A, B and C dying, but their names get lost the next day.  I think it’s really important if people have that point of view, they need to stand up and take
a knee because it’s still going on and it’s going to go on until we do something about it. If people don’t have uncomfortable discussions about this, then it’s going to continue.”

When she was born, doctors had to perform an emergency C-section on her mother to prevent Jacques from dying. She was being strangled by her umbilical cord and, with limited time to act, the doctor delivering Jacques had to forcibly pull the newborn
into the world. She suffered a brachial plexus injury as a result, rendering the nerves that send signals to her shoulder, arms and hands impaired.

“When I was born, I was 10 pounds,” Jacques said. “I was stuck, so the doctor yanked me [by] my arm. He tore a nerve and I couldn’t raise my arms past my shoulders until I was 7.”

She had a muscle transfer to treat her injury when she was 7 years old.

Jacques now hits and runs with her right elbow out. As a child, it made her feel like an outsider and made her not want to play softball because of the embarrassment.

She was different, but she was determined to overcome adversity.

She went to a championship game every year in her high school career, winning three of them. Known for her power and hitting, she became a four-star recruit. Things changed, however, when she arrived at SF State among a cadre of talented players.

From winning championships in high school to not starting every game in college, Jacques says it’s up to her to change her current role on the team.

“It’s humbling, honestly,” she said. “You can’t be a star everywhere. You come to college, everybody is a star. You got to take the punches and roll with them.  You have to take the opportunities that you get and hopefully, you capitalize on them.”

The Gator softball team this year has become a formidable squad. They are 33-16/22-13 CCAA and now sit third in the CCAA standings, having gathered seven more wins than the previous year.

Even more impressive is the team is mostly comprised of freshman. Going into the season, some players thought it would be an average season, maybe finishing sixth in the conference, but Jacques saw the potential.

“I knew the team they had last year was on the come up,” Jacques said. “I called it. I told everybody we’re going to be in third, at the very least we’ll be top three … I kept telling them we have too much power in the bats and defense.”

Despite the on-field success and the friendships off the field, Jacques never told her teammates she was taking a knee.

“I just realized it in the pictures,” second baseman Lehua DeLeon said. “She does her and I support her in anything she does.  We’re family on this team and it doesn’t matter to me if she takes a knee during the anthem.”

One of Jacques’ best friends is starting pitcher Emily Mitchell, who has family members currently serving in the military and wants to join the Marines after college. Mitchell says she doesn’t have any problem with Jacques expressing herself.

“Honestly, I don’t have thoughts about it,” Mitchell said. “I have family who serve and it’s her right to [take a knee] … It’s her choice and I’m all right with that.”

Not even second-year head coach Alicia Reed, who recruited the entire freshman class, knew about Jacques’ protesting until some players told her. Reed says that Jacques’ stance doesn’t divide the team and the team fully supports her right to freedom of speech.

“She has a great attitude,” Reed said. “Her ability to hit the ball is great. Her grit and grind are part of the reason why we wanted her to be part of the program. She is someone who can help us win on and off the field.”

She decided to play for SF State because she was impressed by the softball program being built here, but SF State also gave her an opportunity that no other school could—repairing a relationship with her father.

“My dad works around here, so I thought maybe I could rekindle that relationship as well,” she said. “Our relationship was just rocky,” Jacques said. “We just don’t get along. I regretted a lot of stuff and held on to so much stuff and I thought it was just silly of
me. Life’s too short and [I’ve] got to take it for what it is.”

Her father developed heart issues requiring a pacemaker and the thought of losing her father, even though he wasn’t always present in her life, made Jacques decide to salvage her relationship with him before it was too late.

“Coming to this school and being able to hang out with [my dad] and figure him out more–it has made our relationship 100 times better,” she said.

Jacques is aware that people will have opinions that differ from hers. She was born different and she likes it like that. It makes her work harder, she said.  She can only do what she can to inspire others, and she hopes she can challenge others to stand up
for their rights.