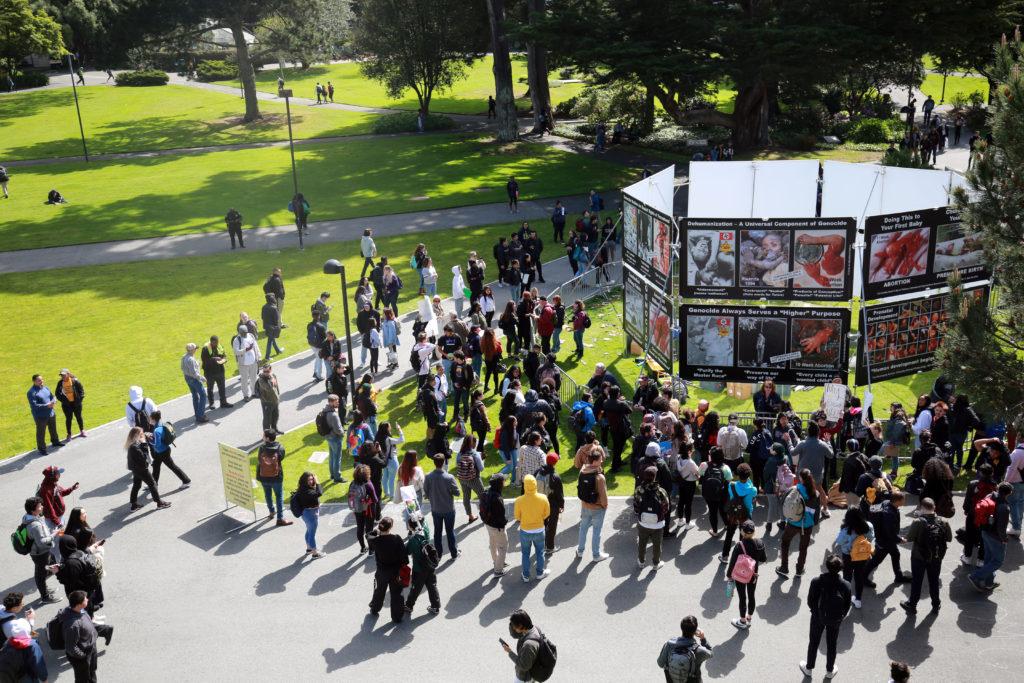 Students gather around the anti-abortion display set up in the quad Apr 15, 2019 (JAMES CHAN/Golden Gate Xpress)

Associated Students Inc. responded to demands made by student organizations regarding anti-abortion group that set up two-story banners with explicit images comparing abortion to genocide.

The student organizations demanded the University and ASI 1.) release records of interactions between the University and the anti-abortion group, 2.) a breakdown of the Time, Place and Manner policy for students to review and 3.) the divestment of funds from University Police be allocated to counseling and police be removed from the Cesar Chavez Building and Malcolm X Plaza.

In response to these demands, ASI said it did not invite the anti-abortion group, it is willing to host a discussion about Time, Place and Manner and that is not able to manage Univeristy Police funding as it is under the purview of Student Affairs and Enrollment Management.

Vice President of SAEM Luoluo Hong said the anti-abortion protesters left early on the second day and did not return for the third.

Singleton said that did not happen, and they left Tuesday due to the time it takes to deconstruct the exhibit and travel a far distance back
home.

“It is not uncommon for us to take down at 3 p.m. when [it is] necessary to accommodate travel home or travel to the next campus,” Genocide
Awareness Project National Field Director Fletcher Armstrong said.

Hong said, although she does not agree with their message, the anti-abortion groups did not violate Time, Place and Manner policy, even
if students were triggered by the explicit content.

She said this policy is designed to set times, places and the manner in which people can engage in freedom of expression on campus.

She said honoring the balance between free speech and the University’s interests is challenging.

“We have a business to run,” Hong said in an interview with Xpress.  “Students are learning and people need the ability to do their job. Those have to be protected—so it’s about how can we manage [TPM] so we can protect both at the same time.”

Students still expressed concerns over the explicit images of fetuses juxtaposed with photos of Holocaust victims, Black men being lynched and the Cambodian death march.

“These people who are comparing abortion to the the lynching of Black bodies and the genocide of the Holocaust are violent on many fronts,” Africana studies major Isis Dorley said. “These protesters were inciting violence with their imaging and words, which is why UPD was so prominent in and around the protesting area.”

Correction: The original version of this story inaccurately reported that ASI made a statement opposing the anti-abortion demonstration on behalf of students. The ASI press release was in fact a response to student organization’s demands. The Xpress regrets this error.