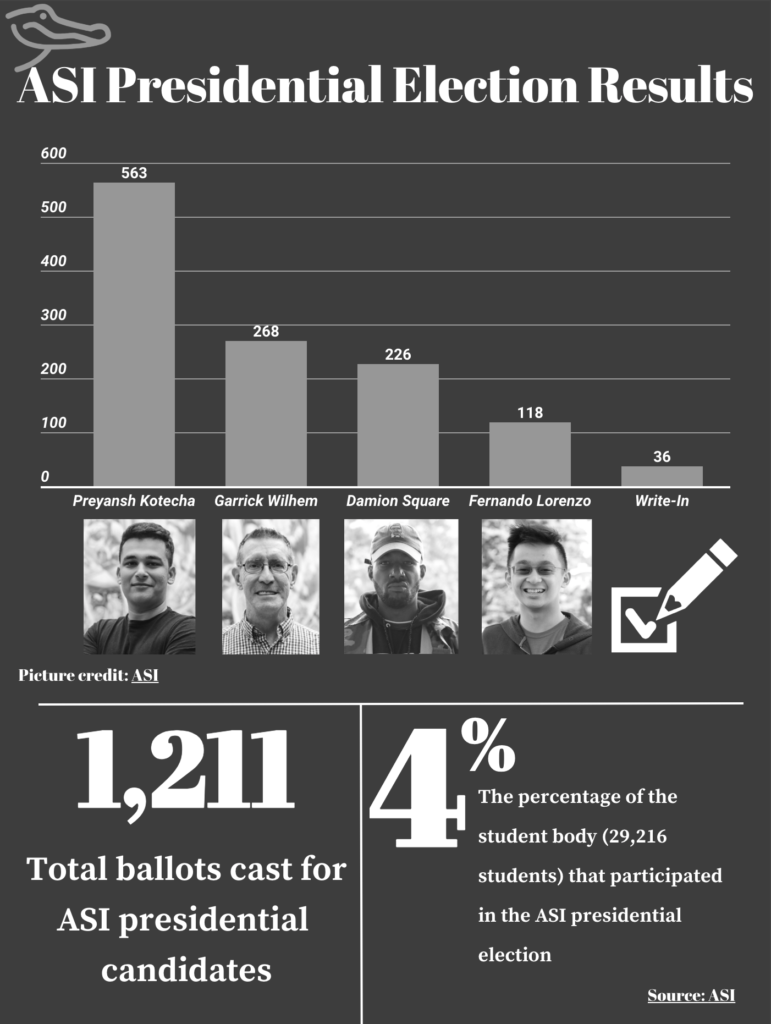 ASI President Nathan Jones said though all votes have been counted, election results will not be made official until either Wednesday or May 1, when the Associated Students Board of Directors will vote to ratify the results.

If the Board ratifies Kotecha’s victory, he will be the first international student to be elected as ASI president in at least 22 years, according to an email from a spokesperson for the Interim Executive Director of ASI, Horace Montgomery, who has been involved with the student government for that duration.

Kotecha won the election by a considerable margin, receiving 46 percent of the student vote. Current ASI Vice President of External Affairs Garrick Wilhelm finished second of the four candidates who received 22 percent of the vote.

Out of about 30,000 students at SF State just over 4 percent voted in this year’s student body presidential elections, and is part of a continued dip in voter turnout in recent years, according to Associated Students Elections Commissioner Nia Hall.

“Each year it’s kind of dwindling down,” Hall said. “The last time we’ve had almost 3,000 students vote was four years ago.”

The president-elect Kotecha said a major concern he has is that students are not aware of the role that student government has within the University and at the state level.

“We have seen that people don’t even know what AS is,” he said. “First thing we need to get them aware that the budget for AS is coming out from their fees and this is their chance to get heard.”

Kotecha ran on the Empowering Gators ballot slate, a group of candidates who endorsed a nominee for almost every race in this year’s elections and won the races for the vice president offices of Internal Affairs and Social Justice & Equity.

Kotecha, who goes by his initials PK, came to San Francisco immediately after graduating from high school in his native country of India.

He said that his experience coming to SF State as an international student new to the Bay Area shaped his goals for creating a socially inclusive environment on campus.

“We need to create a close-knit community on San Francisco State’s campus so that it doesn’t feel like just a commuter school,” he said. “One of the main things is campus activities, if [students] are more involved in campus activities they’ll get to feel close with other students on campus.”

Kotecha said the he plans to create a better organized student government that works to draw community member together. He said these are his main priorities as he also works to address issues students bring to the ASI Board’s attention.

“I’m not concerned about the issues right now because I’m here with a vision,” he said. “I want to focus on getting those things implemented. I believe that issues are a part of any venture you set out on. We have to solve them on the go.”