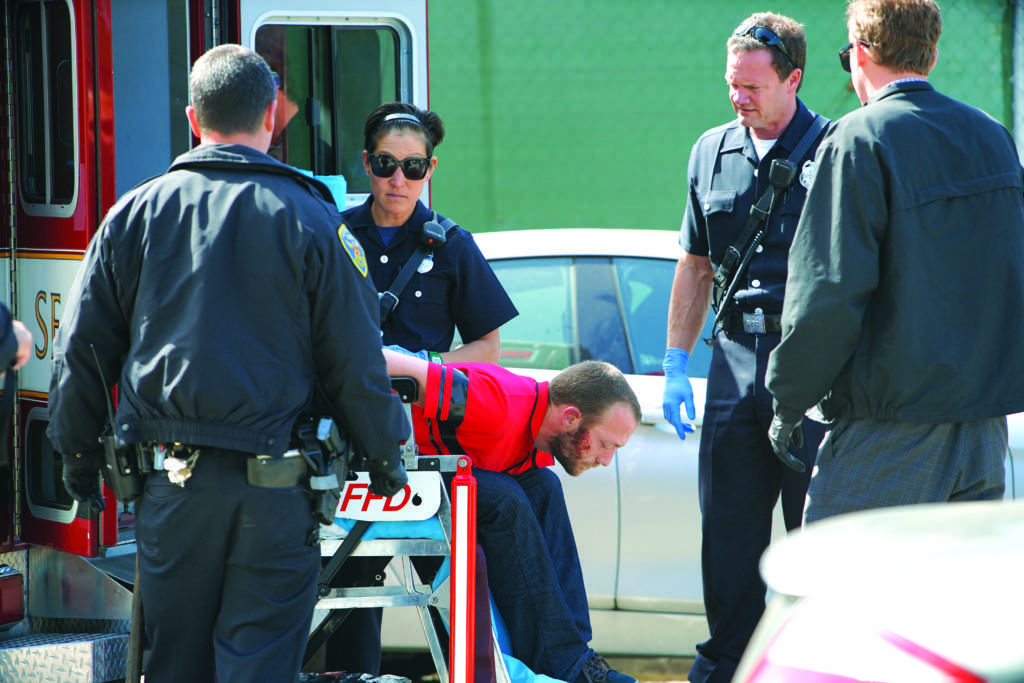 The suspect gets into the SF Fire Department stretcher on Tapia Driver near the Humanities building near SF states campus in San Francisco, Calif. on April 29, 2019 (Daniel Da Silveria / Bay Area Photographer)

A man found to be in possession of a stolen vehicle is taken away on a stretcher after being tackled by police on Tapia Drive near the SF State Humanities Building on April 29, 2019. (DANIEL DA SILVEIRA/Special to Golden Gate Xpress)

University Police Sergeant James Callaghan successfully extracted an agitated man from a vehicle outside the southern entrance to the Humanities Building Monday after a routine traffic stop escalated to a 90-minute standoff with police.

Just after 9 a.m. officers stopped a white man driving a stolen Mercedes Benz with dealer plates on Tapia Drive, west of Font Boulevard. When the man, whom police referred to as Richard, refused to exit the vehicle, Callaghan approached the silver sedan ordering the man to turn off the engine and put his hands on the steering wheel as Officer David Lin stood by with his weapon drawn.

“The driver began to make suicidal statements and stated that he wanted officers to shoot him,” said spokesperson Mary Kenny on behalf of UPD in an email. “UPD officers continued to dialogue and negotiate for the driver’s safe exit of the vehicle.”

Callaghan urged Richard to roll down his window so the two could communicate, and eventually, the distressed driver cracked the window a couple of inches. When asked what was going on and why he wanted to hurt himself, Richard exploded.

“You don’t fucking care!” Richard exclaimed. “Why do you care?!”

“Hey man, I do care, I wanna make sure you’re OK,” Callaghan replied. “No one’s gonna hurt you, Richard. I’m right here. Are you OK?”

Students and workers from the construction site opposite the Humanities Building accumulated along the perimeter of the scene, watching the event unfold while others walked by oblivious until officers waved them away.

“I was right out there trying to walk down the street here, then they told me to go the other way so I came into [the Humanities Building],” creative writing major Chandler James said. “I didn’t see it happen, I was just talking to people who were talking to the cops when I got here. It’s scary, I thought it was a shooter or something at first. It’s scary as shit.”

International relations major Galia Abushi, 24, was also among the onlookers and she said she called UPD’s information line to find out more specifics about what she was seeing.

“I was standing outside of the Humanities Building and I heard the guy shout from the car, ‘If I get out of the car right now you’re all gonna shoot me,’” Abushi told Xpress. “The police officer responded back with, ‘We’re not gonna shoot you, we’re trying to help you.’”

Callaghan told Lin he didn’t see a weapon in the car, but moments later he warned students perched on the stairs in front of the Humanities Building to back up because Richard could have one.

“I was just afraid of what was going to happen, with the surfacing stories we’ve seen for a while now regarding police and how certain situations can escalate so quickly,” Abushi said. “I didn’t miss class, but my concern was mainly how we weren’t notified for a while until after the situation had already started to unfold.”

The two police officers radioed for backup as the situation intensified. Within 30 minutes more than a dozen officers from UPD and the San Francisco Police Department were on the scene while they continued to mollify Richard and persuade him to surrender.

“You’re not gonna die today,” Callaghan told him. “Richard, I’m gonna get you some help.”

After more than an hour of negotiation, police finally brought the incident to a resolution when Richard opened the driver’s side door and two officers pried him from the car.

“The driver of the vehicle voluntarily exited the vehicle, at which point he turned and retreated back into the vehicle,” Kenny said on behalf of UPD. “Based on the driver’s suicidal statements and the possibility of weapons in the vehicle, he was forcibly removed.”

Richard was subdued by three or four officers while half a dozen more clustered around, many with weapons trained on him. He was ultimately handcuffed and sat rocking back and forth on the sidewalk as police searched and bagged the contents of the stolen Mercedes.

He was picked up by a San Francisco Fire Department ambulance shortly thereafter and, according to Kenny, transported to San Francisco General Hospital.