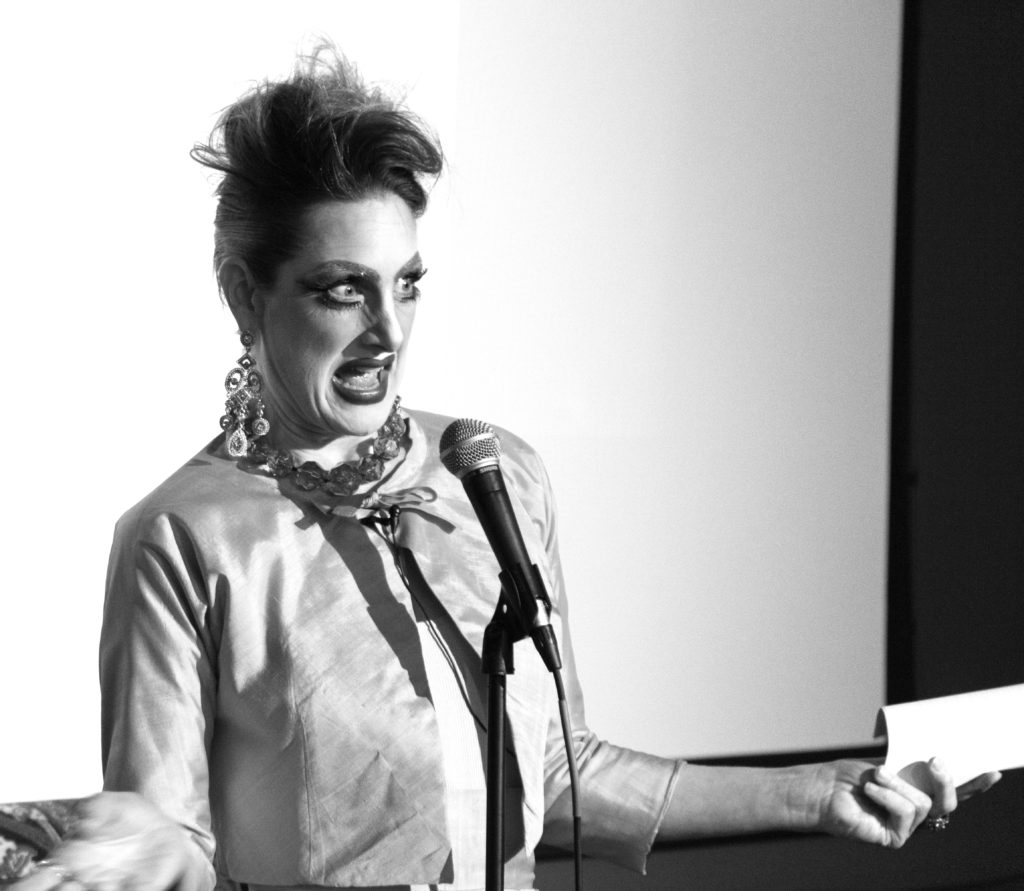 The SF State Poetry Center organized “An Afternoon of Literary Drag with Juliana Delgado Lopera and Monique Jenkinson a.k.a. Fauxnique” on April 27 at 3 p.m. at The Bindery. Delgado Lopera is a drag queen and author, while Jenkinson is a dancer and drag queen by the name of “Fauxnique.” According to Jenkinson, “Fauxnique” was the first cis woman to win the Miss Trannyshack drag pageant.

The two Bay Area writers shared pieces about femininity, fashion and finding themselves, as two writers in drag assigned female at birth.

Delgado Lopera wore a blue painted face with white pearls adorning her cheeks as she shared “Assigned Sad at Birth,” a piece revolving around relationships with women in her family and her escape from religion. She incorporated both Spanish and English and referenced many motifs of her Colombian childhood, like the scent of “Vaporu.”

As Jenkinson’s drag persona “Fauxnique,” she read a chapter titled “Here’s to Hip Pads: Body-ody-ody and the House of More!” from her upcoming memoir, which detailed her experience in the drag scene and her admiration for queens’ femininity and fashion sense.

Through Delgado Lopera and Fauxnique’s performances, the audience experienced literary drag, a term coined by Delgado Lopera to bring liveliness to the literature scene. According to both writers, the term is up to interpretation.

“I came up with [literary drag] myself,” Delgado Lopera said. “I started doing drag because I was tired of how boring readings were and how flat writing felt.”

According to Delgado Lopera, literature and drag are similar in how they both revolve around storytelling.

“[Drag is] kind of like storytelling that comes to life to me and it has a lot to do with performing, writing and being a little bit over the top,” she said.

“[At Esta Noche], the use of language was incredible. Not only was it Spanglish, but it was queer slang too,” Delgado Lopera said. “I was inspired by it and [it] gave me back the love for language and self-expression.”

Jenkinson fell in love with drag through the theatrics of the ballet she practiced since she was young.

“I remember putting on my fake eyelashes … and I was like, ‘This is what my face is supposed to look like,’” Fauxnique said. “I didn’t realize how bad I needed sequins and glitter, spectacle and expressiveness.”

Later in life, she attended a drag club with a friend, and immersed herself in the drag world, happy to be accepted despite being a cis woman.

Jenkinson appreciates how literary drag allows her to have her own monologue. She feels that drag gives her the sense of authenticity she was missing with just dance.

“I always felt like dress up and drag were vital parts of my performance practice that weren’t necessarily nurtured in the world of contemporary dance, which tends to value authenticity over artifice,” Jenkinson said. “But I found when I started doing drag … I found the authenticity through artifice that had been missing in my life.”

During the event’s discussion, Fauxnique and Delgado Lopera expressed that they hoped to maintain their seriousness in the literature world despite being in drag.

Santiago Garzon attended the event and was glad it created a space for people to come and be educated about drag without exploiting it.

“We all need a space to coexist and to share information in a brave and healthy space where we’re not being tokenized or targeted,” Garzon said.

Delgado Lopera and Jenkinson created this space to celebrate their place in literary drag.

“Even though we’re coming from being assigned female at birth doing drag, we’re adhering to a certain kind of tradition of what it means to look like [while] in drag,” Fauxnique said. “A little lipstick and a boa will not do.”