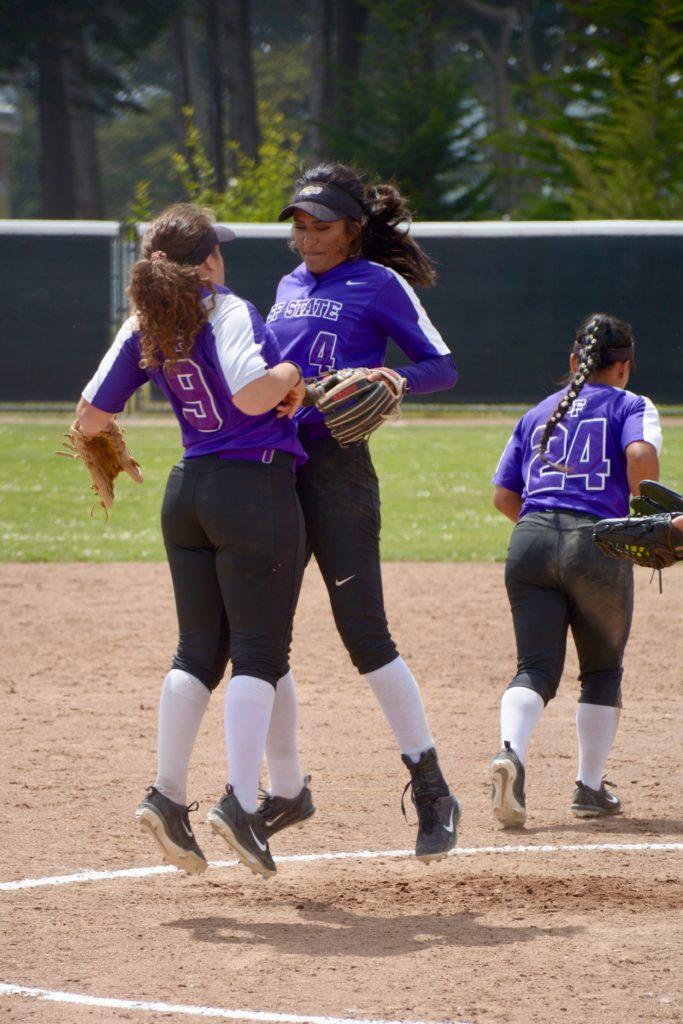 Hayley Nunes chest bumps Michele Castro during the Gators game against the CSU East Bay Pioneer's in a doubleheader for Senior Day on Saturday, April 27th, 2019. Photos by Tristen Rowean.

The Gators softball team swept a pair of doubleheaders against the Cal State East Bay Pioneers over the weekend and head into the postseason for the second time ever in the CCAA conference, as the hottest team in the conference on an eight-game winning streak.

SF State earned their second ever trip to the CCAA conference playoffs for the first time since the inaugural season of the conference postseason dance in 2007, where the Gators went 31-33.

SF State opened the series with a pair of walk-off victories against the Pioneers, with their game one win the 800th in program history. Freshman Brylynn Vallejos also broke the SF State single-season hit record in game one with her 84th hit in the third inning. The freshman concluded the regular season with 90 hits, leading all of CCAA.

Vallejos registered nearly 30 more hits than her teammate Michelle Castro, who sits in second place in the CCAA with 62 hits this season. The 90 hits are also the second-most in Division II this season. Vallejos also boasts a ridiculous .462 batting average, obliterating the then-program record of .409 by Jordanna Freemer in 2006. The star freshman’s batting average also leads the conference this season.

A Sarah Fukushima sacrifice fly in the sixth inning was the Pioneers’ lone run in game one. The Gators were down to their last out when Sydney Jenkins singled up the middle to score Lehua DeLeon and send the game to extra innings. In the eighth inning, DeLeon doubled to right to score Michelle Castro and defeat the Pioneers 2-1.

After a pitching duel in game one, the bats came alive with the Gators outlasting the Pioneers 11-10 in yet another eight-inning victory. Katelyn Sturm did the most damage against Cal State East Bay, with the freshman left fielder going 3-of-4 with six RBIs, including a two-run home run in the eighth to tie the game at 10.

The Gators offense continued to roll in the eighth inning with Jenkins singling to left field, scoring Tianna Jacques to walk it off for the second time.

Before Saturday’s doubleheader, SF State recognized four seniors—Jennee Wilson, Hayley Nunes, Celeste Adriano and Karla Soto. Soto started for the Gators and recorded her 17th win of the season with a complete game shutout on seven hits, two strikeouts and one walk.

Soto admitted there was added pressure going out to pitch her last game at SF State, with the atmosphere having felt like a playoff game.

“It was exciting, pitching my last game and it being a shutout, and the first game was really intense,” Soto said. “It’s really cool to not feel sad over senior day, because it’s not over.”

SF State put two on the board in the fourth with a Jacques single scoring DeLeon and Letrice Thompson to put the Gators up 2-0. The Gators doubled their lead in the sixth off an Adriano dribbler to the first baseman and a Jenkins double. Soto finished the game by striking out Courtney Leyba for the 4-0 Gators victory.

Jacques said the seniors are the biggest leaders on the team and have helped the young Gators throughout the season. Half of the roster is comprised of freshmen.

“They might not be the starters on the team, but they always have the biggest voice, on the field and off the field,” Jacques said. “They influence us in the best way possible.”

The Pioneers rallied with two outs in the second inning to get an early 1-0 lead in the series finale. The Gators had a two-out rally of their own in the second. Samantha Alvarez hit her first career home run when she drove a pitch to left center field to score Sturm.

SF State kept the rally going by scoring three more runs with two outs to extend the lead to 5-1. The Gators tacked on two more runs and the Pioneers scratched across one in the seventh for a 7-2 final, giving the Gators an eight-game winning streak as they prepare for the playoffs.

SF State head coach Alicia Reid believes the team is in a good position as it heads into the postseason.

“We showed a lot of good things this weekend,” Reid said. “I think this team is ready to go and excited for the next step. It’s fun because everyone hasn’t experienced this yet. I can’t wait to get going.”

The Gators improve to a 26-13 conference record and a 37-16 overall record. The 37 wins are the fourth-most in program history.

The team will travel to Seaside, California, for the 2019 CCAA Softball Tournament at Cal State Monterey Bay. As the No. 3 seed, SF State will face the No. 6 seeded Cal State San Bernardino Coyotes on Thursday, May 2, at noon.

Correction: In the Tuesday, April 30 (Vol. 109, Issue 13) print issue and in a previous online version, it was incorrectly stated that the Gators reached the postseason for the second time ever.  The Gators reached their second trip ever to the CCAA conference.  Xpress regrets this error.  (Monday, May 6, 2019/ 3:13 p.m.)