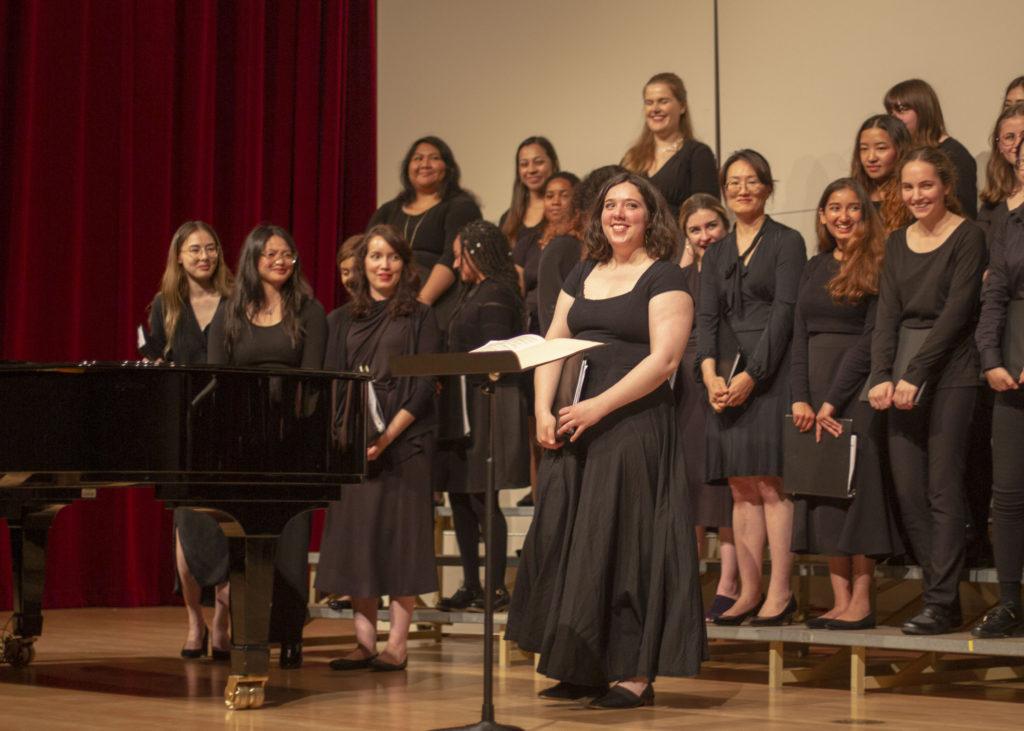 Ana Miranda steps forward for applause at the end of “In Paradisum” an opera concert by SF State's University Chorus Apr 25, 2019 (James Chan)

After the lessons and obstacles graduate music student Ana Miranda has experienced, she is finally on track to follow her goal of becoming a professional opera singer.

Miranda is a student in SF State’s master of music program who has been singing classically since she was 5 years old. Miranda is part of the college’s largest ensemble, University Chorus, and recently performed a solo at SF State’s “In Paradisum” opera concert on April 25. After receiving her undergraduate degree in classical music from SF State in 2016, she is now hoping to graduate from the master’s program in 2020 and pursue a career as a professional opera singer in Chicago.

Miranda was surrounded by theater, music and singing while growing up in Los Angeles with two musician parents. She began singing in a church choir that her mom put her in at a young age. In her adolescence, when faced with the decision of attending a traditional public high school or an arts school, Miranda chose to audition and attend LA County High School for the Arts.

Miranda said this decision impacted her interest in singing.

She originally auditioned for musical theater, but ended up getting a part in the opera, beginning her long-lasting love for it.

“It allowed me to be someone else for a short period of time and I kind of fell in love with the idea of being able to portray a character that wasn’t myself,” she said. “I continued singing opera because the more I explored the world [of opera] I found composers and specific shows that spoke to me.”

Now about to receive her master’s of music degree, Miranda is one step closer to turning her passion into a career.

According to Miranda, her path to pursue opera has not always been easy. When she attended SF State in her undergraduate years, she mostly sang mezzo soprano. She felt as though she would be singing mezzo soprano for the rest of her life, but things changed when she was 22 years old due to her hormones, body and voice changing. Miranda reluctantly took on a soprano range, but grew to love it with the encouragement of instructors.

“It was with the help of the instructors that I’ve had over the last couple years that have pushed me to accept that I’m something that I wasn’t before,” Miranda said. “I have evolved in my voice, but also just as a person because it’s hard to let go of something that you hold very close to yourself.”

Another obstacle she overcame was the stigma behind taking gap years between undergraduate and graduate school. During her gap years, from 2016 to 2018, she learned how to accept failure and find herself.

“My gap years kind of helped me find myself,” Miranda said. “You discover a lot about yourself when you’re left alone in the big world without help or school to be that thing you lean on.”

According to one of her closest friends and fellow SF State University Chorus member, Raquel Taylor, Miranda never failed to lose her musical and hardworking abilities.

According to Taylor, Miranda adds color, depth and warmth to University Chorus with her voice and passion.

According to Miranda, some of her favorite opera and concert works have come out of performances, and even rehearsals, at SF State.

“I have to say, rehearsals are some of my favorite moments of a show because you get up and you do your show four or five times and then it’s over, but you remember your rehearsals like what you did and what you accomplished and how you progressed,” Miranda said. “They’re very rewarding, and they’re a really big part of what makes a musician.”

Along with good memories, she has also made long-time friends. Her partner, SF State graduate student Carlos Gonzalez, said that they serve as mentors for each other.

“She’s inspiring, she has a beautiful voice and she’s professional,” Gonzalez said. “I think for a lot of students it’s easy to get carried away, but I think she’s one of those people that inspires other people to kind of get their shit together.”

With a year left in grad school, Miranda plans to make big steps toward her next goal of a possible move to Chicago to perform opera professionally and get her doctorate degree.