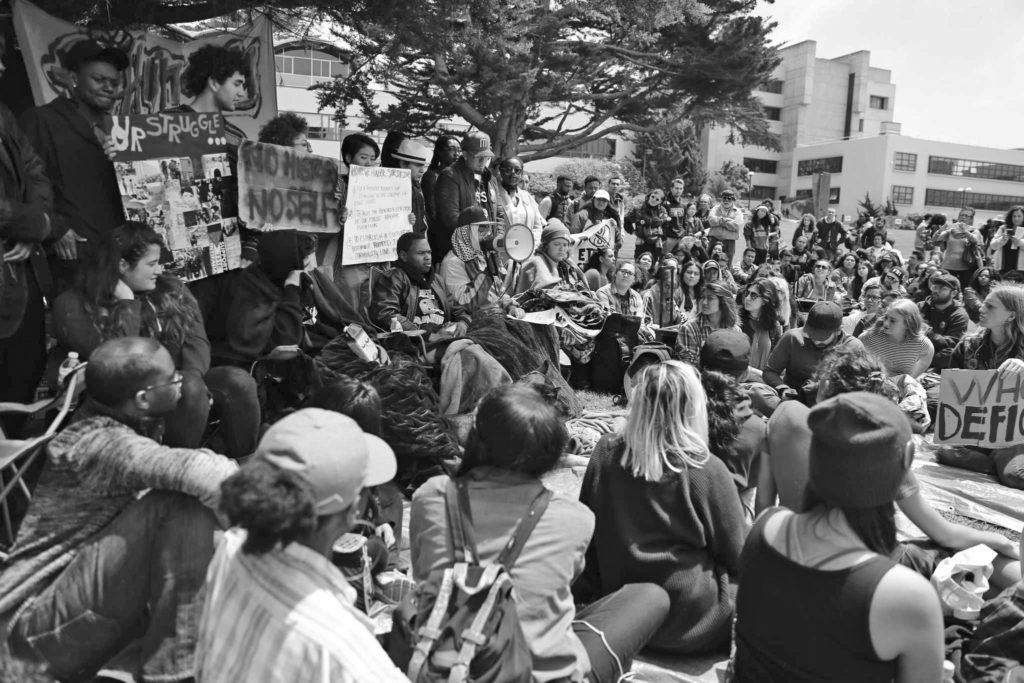 Students and faculty gather in the quad for a press conference regarding demands for SF State, President Wong on the eighth day of the hunger strike on Monday. The hungerstrike is led by the Third World Liberation Front 2016, a name used to pay homeage to the 1968 strike. (Aleah Fajardo/ Xpress)

Students and faculty gather in the quad for a press conference regarding demands for SF State, President Wong on the eighth day of the hunger strike on Monday. The hungerstrike is led by the Third World Liberation Front 2016, a name used to pay homeage to the 1968 strike. (ALEAH FAJARDO/ Golden Gate Xpress)

The SF State chapter of Students for Quality Education, a statewide organization that promotes quality, affordable and accessible education, is concerned the University’s restrictive Time, Place and Manner policy coupled with a slow bureaucratic process limits campus freedom of speech.

The Time, Place and Manner policy dictates where, when and how people can express themselves on campus, according to Vice President of Student Affairs and Enrollment Management Luoluo Hong.

The current policy makes it difficult for students to organize impromptu protests or reach out to the community through tabling, according to SQE representative Maria Rivera, but for SQE it’s nearly impossible.

The group first sent its application and appropriate information to the Office of Student Activity and Events in an effort to become a recognized and active organization in early February, but in the intervening months the University has dragged its feet.

“I should not be chasing after administrators to [get them to] do what they are paid to do,” said Rivera, who uses the pronoun “they.” “I have not had the time to seek them out because I’m a full-time student and I work. The outcome is that the semester is almost over and we still haven’t been approved.”

They said the draconian limitation Time, Place and Manner imposes on the decibel level of campus protests is an especially concerning aspect of the policy.

“It’s a maximum of 75 decibels,” they said. “That’s between the sound of a vacuum and a blender. And we checked online and another reference [for comparison] we got was the sound of a washing machine.”

Hong said the amendment to include the provision about noise limitations is one of the main changes to the policy since she was hired in 2014. She said the additions to the policy were influenced by incidents like a protest that truncated the mayor of Jerusalem’s visit to campus as well as a string of fliers that used hateful rhetoric to target specific professors and students.

The restriction on sound amplification devices like bullhorns and stereos is to ensure that classroom lectures are not disturbed, according to Hong.

“We have a business to run,” Hong said in an interview with Xpress. “Students are learning and people need the ability to do their job. Those have to be protected—so it’s about how can we manage [Time, Place and Manner] so we can protect both at the same time.”

Rivera said it’s concerning that free speech has a decibel level limit while contractors working on the construction projects on Tapia Drive and Holloway Avenue have no such restriction. While the nearby construction noise is a disturbance, Hong said the changes to the policy do not apply to these projects.

There is no student collective bargaining group involved in the revision process, but the University met with focus groups and took student input before the policy was finalized in November 2017, according to Hong.

She said they listened to suggestions, but could not implement some of the requests.

“I would just keep in mind that we always have to comply with state and federal laws,” Hong said in an email. “In other words, we get many suggestions that would require us to engage in illegal actions and unfortunately, we cannot do that.”

Hong said balancing students’ freedom of speech on a diverse campus like SF State is a challenge because even hate speech is protected by the first amendment.

“We have to be content neutral,” Hong said. “And that, again, speaks to the freedom of expression piece, which is that the University has right to regulate Time, Place and Manner. We cannot differentially apply, or enforce the rules based on the content.”

At 26 pages, Hong said SF State’s policy document is the longest within the California State system because of the University’s history of social movements and protest for equity in the classroom and the workplace.

Rivera said because the policy is the longest in the state and pulls from the Student Code of Conduct and other CSU documents, it could be opaque to the average student.

“So if you’re a responsible student who wants to know everything, you have to spend an incredible amount of time tracking down what policy links to each document,” Rivera said. “And then [you have to] make sure that you can understand how it applies to you on campus.”

The most recent event that sparked unrest on campus was a two-day demonstration in the quad by an anti-abortion organization that displayed a two-story banner with graphic images of lynched Black men, Holocaust victims and Cambodian Death March victims, alongside images of what were purported to be fetuses, in an attempt to conflate genocide with abortion.

Hong said the University policy cannot control the content of expression, even if some members of the community view it as hateful.

But SF State Chapter President of the California Faculty Association James Martel said Time, Place and Manner has been used as a way to silence certain groups.

“It’s ironic that the University envisions itself as a beacon for social justice and academic freedom when it has one of the most draconian policies in the United States,” he said.