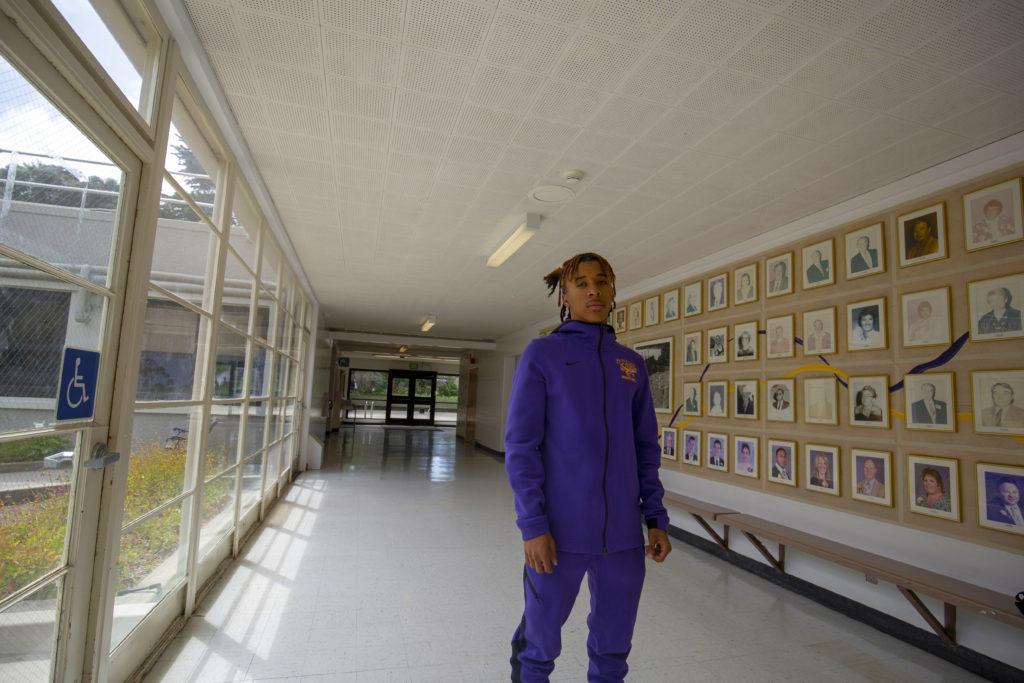 Senior Guard Niquis Garland dribbling the ball on the court in The Swamp on April 29, 2019. (JAMES CHAN/Golden Gate Xpress)

Just two weeks after setting a career-high with 20 points against Cal Poly Pomona on Jan. 26, senior guard Niquis Garland’s basketball season was over due to eligibility issues.

For Garland’s,  interest in basketball piqued when he was just 2 years old, watching a Los Angeles Lakers game with his dad. It was in that moment he remembers saying the word basketball for the first time.

Noticing his interest, his dad balled up a sock and made a hoop with his arms and Garland shot his first basket.

At 4, he began playing at Baldwin Hills Recreation Center in Los Angeles, where he played for most of his childhood.

Garland arrived at SF State in spring 2014 and knew he wanted to continue his journey with basketball. However, he wasn’t recruited from high school, making his transition to college ball a bit different. He  made several attempts to try out for the team by persistently contacting coaches.

“The first time around, I talked to coach [Paul] Trevor and he told me that he was going to give me an opportunity to walk-on or come to a tryout in the fall of 2015,” Garland said. “When I came back after working very hard over the summer, he told me that his roster was full and he wouldn’t allow me to try out. It was heartbreaking.”

Though this wasn’t the news that Garland expected, he felt motivated to continue his pursuit of making the team.

“That’s when it hit me. I could never let another person tell me that they’re going to put a halt to my dreams, it’s up to me. I just didn’t quit,” Garland said.

The following season, he came back and was given the chance to try out, earning the role of team manager.

“As the manager, I had to sit on the bench in one of the school’s best basketball seasons in its history and that was tough, but I didn’t let it discourage me,” he said.

After two years of tryouts, he finally made the team during his third year at SF State in the 2017-18 season.

“It was a dream come true—it made all the struggles worth it,” he said.

Current men’s head basketball coach Vince Inglima got to know Garland while he was working as a manager. After getting the time to know the type of person he is, as well as his incredible work effort, Inglima was certain that Garland should be on the team.

“Niquis was the heart and soul of our program,” Inglima said. “When I took over from being the assistant to being the head coach, the first thing I did was put [him] on the team. That was probably the most important thing I ever did.

“He’s not the biggest guy, he’s not the most athletic guy, but he played with such passion. He worked incredibly hard, he lifted everyone’s energy and playing ability with his presence.”

However, Garland’s time on the team was short-lived. At the beginning of his senior year, he received a call that he possibly wouldn’t be able to continue playing as his eligibility was running out. His coach told him that the NCAA gives its players a total of 10 semesters of eligibility to compete over four years. His time was up.

The goal of the NCAA is “to govern competition in a fair, safe, equitable and sportsmanlike manner, and to integrate intercollegiate athletics into higher education so that the educational experience of the student-athlete is paramount,” as detailed in its mission statement.

“Because [Garland] started during a spring semester-long before we knew who he was, that started his clock of full-time semesters and so he stayed continuous all the way through and it was his 10 semesters,” Inglima said. “Even though he only played in three semesters and he was allowed to technically play eight, he had used up his 10 semesters of being a student and that’s a hard and fast rule of the NCAA.”

Garland filed an appeal with the help of his coach and Director of Compliance Zoya Volpe.

His first appeal was denied and he was told that he would need more letters of recommendation.

This process resulted in him missing two games, one of which was needed for the team to clinch a playoff seed.

It was decided that Garland was ineligible to play during the rest of his final season. This news came as a shock to some of the players, as it came just after he had scored a career-high 20 points in what would be his final game against Cal Poly Pomona.

“I feel like the NCAA did him dirty,” teammate Michael Diaz said. “That game was on ESPN. His story and what he had to battle through to get here, I feel like NCAA should have more respect for a player like that and give him leeway to have him play.”

Fellow senior Ryne Williams also agreed that the NCAA’s ruling was unfair and thinks that the work that Garland put in to make the team should have been acknowledged.

“For them to not rule in [his] favor on this, that hit home … the fact that someone could look at his story and how hard he worked to get to where he was, the fact that someone could look at that and turn down many requests and challenges is just shocking,” Williams said. “I had known what the NCAA had been doing to athletes, but to see it firsthand was a different experience.”

As director of compliance, Volpe thinks that overall NCAA guidelines are fair, though in this specific circumstance she questioned the ruling.

“Unfortunately, Niquis fits the letter of the law but not what the spirit of what that regulation is for. It’s made for people trying to cheat the system and unfortunately the good kids get caught up in the same [regulations],” Volpe said.

Garland hopes that his story shows others that if they are willing to consistently work hard for what they want, their goals can be accomplished.

“I’m not the most talented person, I’m not the largest man. I’m 5-foot-7, 140 pounds. I’m not one of those people that everything happened for right away for,” Garland said. “My story is all about hard work. If you really want something and you’re willing to [work], it doesn’t matter what the odds are against you, it’s about you. I feel like that’s a message that will relate to so many other people.”