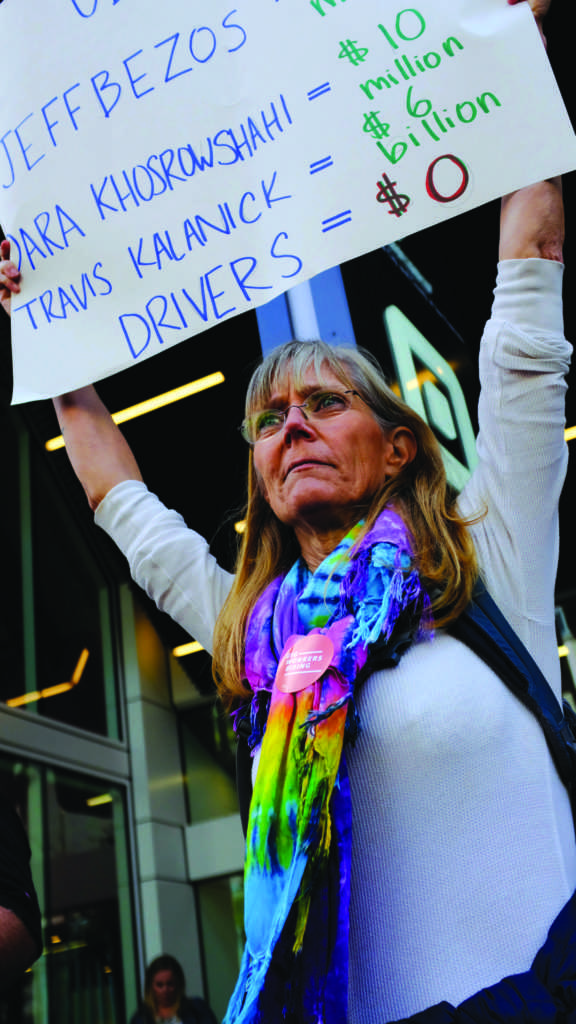 Ann Glatt, a driver for Lyft, leads the protest for better driver wages on May 8, 2019 at the Uber Headquarters in San Francisco, Calif.

Ann Glatt, a driver for Lyft, leads the protest for better driver wages at Uber Headquarters in San Francisco on Wednesday, May 8, 2019. (CAMILLE COHEN/Special to Golden Gate Xpress)

Ride-hailing service drivers and users across the nation turned off their apps for 12 consecutive hours in an act of solidarity for better pay and benefits for Uber’s workers. Thousands of supporters also demonstrated in New York City, Los Angeles and Chicago, according to CNN.

Uber driver Vinny Marcos said the ride-hailing giant reduced fares and raised its commission in the past five years he has been with the company.

“We can’t make enough money to support our families and cost of living, and we don’t have any benefits or healthcare,” Marcos said.

Marcos said his work conditions with Uber are becoming unmanageable. He said he works 12 to 14 hours a day, six days a week, and barely earns enough to make ends meet.

Uber driver Mila Cho agreed with Marcos and said Uber has been inconsistent with pay in the past three years. She said there have been multiple instances where Uber withheld some of her paycheck for the trips she made and she had to file for a reimbursement.

“There has been so many times that I’ve caught them [and] got my money back, [and] they are still cheating us,” Cho said. “Now I write
everything [down] and I calculate everything that I make.”

Cho said Uber would function better if it let drivers know how much they will make per ride at the beginning of the trip rather than after they
complete it.

“They shouldn’t be abusing the drivers and the passengers [and] taking advantage [of] this app just to make a huge amount of profit,” Uber driver Mustafa Al Hafidh said.

San Francisco local Katy Bradley said she attended the rally to support workers who suffer from large corporations and to advocate for better
wages across the country.

“We are trying to enforce the idea that one job should be enough, that there should be better health care and all the typical [needs] for surviving on a day-to-day basis,” Bradley said.

City College of San Francisco professor Alison Datz joined the protest and said there is a huge wage gap between Uber drivers and the company’s executives.

“They are gig workers, and this is a whole gig economy,” Datz said. “Some people are getting really rich while others aren’t — we can do better.”
Jeff Perry, who drives for both Lyft and Uber, said Uber granted drivers an appreciation bonus to buy IPO shares set at the public offering price
of $45.

The appreciation bonuses are extra payments granting anywhere from $100 to $10,000 to drivers who have completed more than 2,500 trips, according to Perry.

Perry said the bonus does not make up for the pay cuts and lack of benefits, which affect his financial stability.

“I work twice as many as hours and I make less money than I used to before,” Perry said. “I can’t work more hours, I already [drive] until the
app kicks me off.”

“We stand here today to say, ‘Hey, look out for us and give us some,’” Uber driver Derrick Baker said. “I don’t have a problem with you guys making money — we want to make money too.”

The company’s first day of public trading on the stock market Friday ended in the red, with Uber closing down by 8 percent. The downward
slide continued Monday with Uber nearing an 18-percent decline from its IPO price of $45, according to CNN.