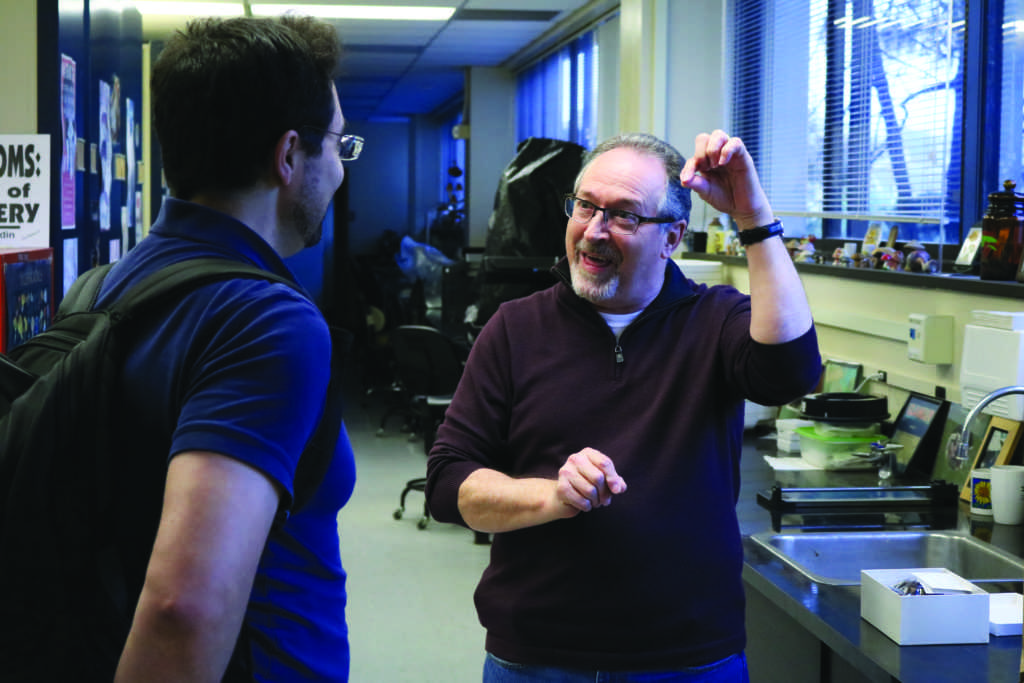 Chased out a swamp by a cottonmouth in Louisiana. Bit by a necrotic spider in Thailand. Held up by guerilla wielding AK-47s for trekking the Andes of Colombia during the height of the drug war. Such adventures seem fit for “Indiana Jones,” but the man who lived them is SF State’s own professor of mycology, Dennis Desjardin. What brought him to these locations was no fictitious archeological pursuit, but a very real journey to hunt and study mushrooms.

In his time at SF State as professor of mycology and director and curator of the Harry D. Thiers Herbarium, Dr. Desjardin has turned out 29 accomplished graduate students, acquired grant funding for the department on multiple occasions, traveled the globe, discovered and named 300 species of fungi and made countless contributions to the more than 115,000-specimen herbarium.

After 30 years with the University, Desjardin, 69, will retire at the end of next spring.

“I’m very happy for him, he deserves it,” said former graduate student Jackie Shay, who is currently pursuing her Ph.D. in quantitative and systems biology at UC Merced. “He’s had an excellent career full of fruitful discoveries and has turned out a lot of successful students from his lab. His influence is profound and will continue to be [in retirement].”
‘Passion and expertise’
For those who have worked with and studied under Desjardin, his contributions to mycology, unparalleled passion and lasting influence cannot be overstated.

“I wouldn’t be where I am today if it were not for the passion and the expertise that Dennis puts into not just the teaching, but into everything that he does,” said Brian Perry, alumnus and department of biological science chairperson at Cal State East Bay. “In addition to Dennis having a huge impact on the way I teach my courses today, he’s also had a huge impact on my professional development as a mycologist.”

Andrew Wilson, assistant curator of mycology at the Denver Botanic Gardens and another of Desjardin’s former graduate students, said beyond his superb teaching, “Dennis’ contributions are all the new species he’s described [and] all of the external funding he’s brought into the University and the department to run the Herbarium and keep things going.”

Getting to where Desjardin is now was no easy task, but that’s not to say it wasn’t a lot of fun either.

Besides traveling to far-flung places and building an arsenal of interesting stories, Desjardin has named 300 species of fungi, some of which garnered extensive media attention. Inspiration for the names he creates comes in many forms, from paying homage to the local cultures where the species was discovered to naming one after his wife, but after a while, his naming process grew playful.

Phallus drewesii, a foul-smelling, penis-shaped mushroom from the African island São Tomé, was described by Desjardin and Perry in 2009. Not only is it one of the smallest Phallus species, but unlike its erect relatives, this droopy two-inch mushroom appears flaccid. For a good laugh, they named it after their longtime friend Dr. Robert Drewes, curator of herpetology emeritus at the California Academy of Sciences, who led their expedition in São Tomé.

Then there’s Spongiforma squarepanstii, a fruity-smelling mushroom from Borneo resembling a sponge, that takes its name from cartoon character “SpongeBob SquarePants.”

Shay said finding someone to take his place with the same level of enthusiasm and dedication to mycology and taxonomy will be a real challenge for SF State.

“It’ll be very hard to fill those shoes,” she said. “There are people who can do it, but I don’t know if they’ll be available to do it. I worry.”

Desjardin won’t be gone for good, however. He plans to stick around SF State and the Thiers Herbarium for another five years as part of the Faculty Early Retirement Program. He’ll have half his current workload and half the pay, but he’ll still receive benefits and have even more time to continue his research.
Never too old
Desjardin said he owes his success in mycology to his mentor, the late Harry Thiers, who ran the mycology department and directed the Herbarium on campus until 1989.

When he told Dr. Thiers in 1981 that he wanted to return to college at 31 to study mushrooms, the renowned mycologist replied, “Well, you’re kind of old.”

After dropping out of San Jose State a decade earlier to play jazz professionally, Desjardin realized he wanted a more stable career.

“My dad played with Benny Goodman in the 40s, in the big band era, so I learned saxophone from [my dad] and started playing when I was 10,” he said. “[Later I] went to college, played through the college jazz band at San Jose State and then dropped out to play music in the Bay Area.”

He had spent all the 70s playing saxophone professionally, but Desjardin felt it was time to go back to school and pursue a more fruitful career in another field he loved: mycology.

His deep-seated fascination and love for mushrooms began early in life when he collected edible mushrooms with his parents and grandparents. He not only had a knack for finding them — classifying his finds and recognizing the wealth of diversity among fungi always captured his imagination.

That, along with his recognition that the field is understudied and rife with potential for new discoveries, led him to Thiers and the mycology lab at SF State.  To get to the level of Thiers he would need to get a doctoral degree. At that point, he had yet to complete his bachelor’s.  Undaunted, Desjardin began the eight-year slog to his Ph.D., essentially acting as Thiers’ apprentice.

“I stayed on to get a master’s with Harry, to learn from the leading mycologist in North America at the time,” Desjardin said. “I have always believed in that guru-disciple approach to learning anything, so I came here to study with him. That’s why I came back to college.”

He’d go on to earn a Ph.D. in botany from the University of Tennessee eight years later. By 1990, Thiers had retired and Desjardin replaced his mentor as mycology professor and director of the Herbarium.

“Everything worked out perfectly,” Desjardin said.
‘Mushroom guru’
According to his graduate students, the guru-disciple approach Desjardin so admired in Thiers is reflected in his own time teaching at SF State.

“He’s like the mushroom guru of the West Coast,” Shay said.

A mentor to many, he taught his students about more than just mycology.

“I didn’t only learn about fungi, but I also felt like I learned how to become an academic,” Dr. Wilson said. “I learned how to be an inquisitive person and look at things objectively. There’s certain skills that you can develop as a biologist that aren’t necessarily taught in classes, but you kind of learned this through exposure, through processes that your instructors and your mentors put you through and Dennis was really good at that — he was really good at teaching the process of science.”

Even in retirement, Desjardin’s influence will continue to be felt by the students of his disciples, who all ask themselves, “What would Dennis do?” when they consider how to teach their own students.

“Whenever I think about teaching myself, I kind of wonder and figure out, ‘How can I be like Dennis? How would Dennis do this?’” Wilson said. “I even still have my manuals from introductory to biology and the higher fungi, and I still use them as resources. I’m hoping to teach my first
course in mycology here at UC Denver, and I’m thinking I need to put together my own manual like Dennis had, so students can have this resource when they continue on in their mycology career.”
What’s next
Although he’s retiring, Desjardin doesn’t think he’ll ever stop teaching.

“Just because you’re not teaching a large class doesn’t mean you’re not teaching,” he said. “I will continue to give public lectures all around the world, which I do now, on mushrooms and various aspects about mushrooms. I will continue co-publishing with students and professors from
all over the world, as I do now — that is a form of teaching — and publishing the data is another form of teaching. So, I will never get away from teaching.”

But there are still aspects of teaching large college classes he’ll miss.

“Sometimes there’s some really good questions or different ways to look at a subject that I wouldn’t have thought of,” he said. “Being surprised and educated by different viewpoints from students, that would be the biggest thing I would miss.”

In retirement, Desjardin plans to continue doing everything he loves doing now but with greater freedom, including hiking, playing his saxophone, cooking and spending time with his wife. He’ll also use the extra free time to keep traveling the world, albeit in a more leisurely fashion.

“I have traveled all over the world with my research — I’ve been just about everywhere,” he said. “But there are some areas that I’d like to go to where I could experience them not as a scientist with a duty to fulfill, but more as a relaxing [vacation] and study the local culture and history
more, as opposed to just getting immersed in it because I’m there to do some research and communicate in an academic way.”

Indonesia, befriending soldiers while collecting mushrooms in Thailand during the last coup, or dining in a restaurant in Medellin, Colombia, where the only company beyond his colleagues was a cocaine lord, his wife and their armed guards.

Conditions permitting, he also won’t be contracting dengue fever or harboring “every other kind of intestinal parasite that you can imagine,” as he has in his past adventures.