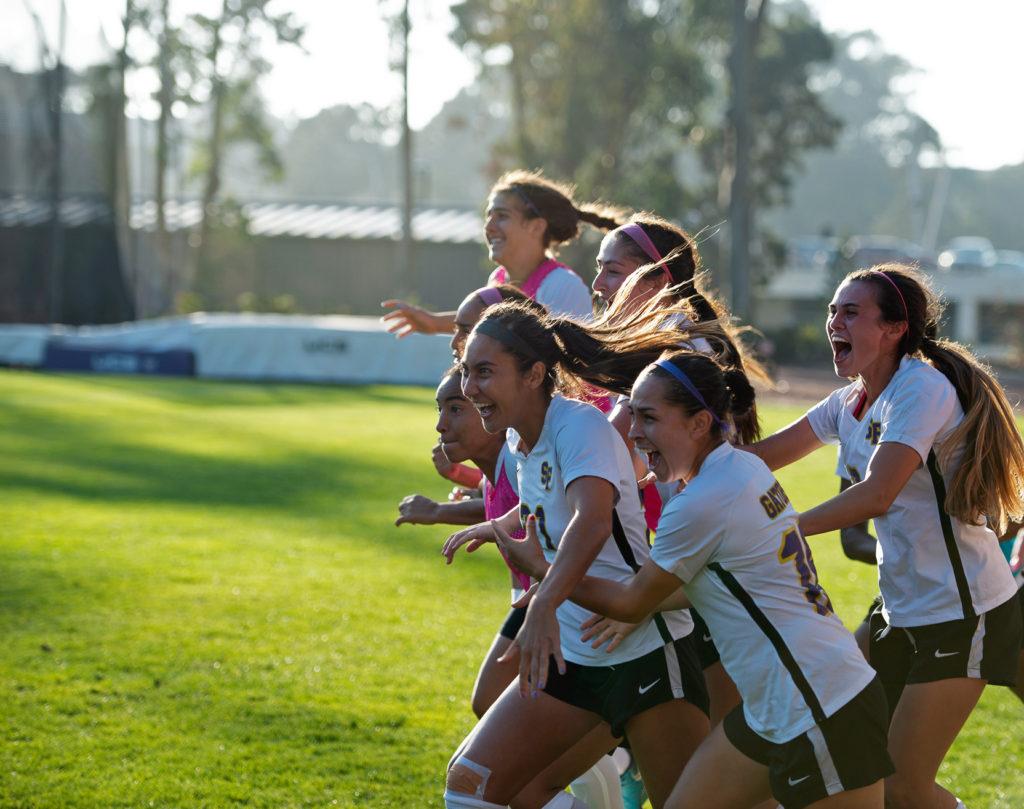 The women’s soccer team celebrates, as the team secure the 1-0 victory against the Stanislaus State Warriors on Friday, Oct. 19. (David Rodriguez/Golden Gate Xpress)

It was uncharted territory for the women’s soccer team. A four-game win streak to end the 2018 season en route to their first playoff appearance in eight years. A streak that saw the Gators score 10 goals over four games; the same amount of offense they orchestrated over their first 13 games. A streak that came crashing down against UC San Diego, the No. 10 ranked Division II team.

“I’m really proud of my team and what we accomplished this season,” said the former Gator coach Tracy Hamm during an NCAA press conference.

That press conference not only concluded their spirited playoff run but it also ended Hamm’s four-year tenure as head coach.

Now, after scrambling on playoff turf for the first time since 2010, the Gators are ready to build upon last season in Hamm’s honor with the ambition of making playoff appearances not a rare holiday retreat but an annual inevitability.

“It is the only culture I know, ones that compete and play in the playoffs” said Cameron.

After a debut season as an assistant, the torch has been passed to her as the soccer team’s newly minted bench boss.

“I’ve been best friends with Tracy [Hamm] since I was 13” said Cameron. “I have learned a lot from her and wish her the best.” Hamm left San Francisco State for a head coaching job at UC Davis.

Before Cameron’s coaching career got started, she played professional soccer for the Vegalta Sendai team in Japan as a goalkeeper for four seasons. She also spent time with Sky Blue FC in the National Women’s Soccer League and played in the United States Women’s Senior National Pool.

Her vast career as a goalkeeper, which included a 2008 West Coast Conference Defender of the Year award at UC San Diego, helped turn San Francisco State into a defensive powerhouse. Last season the Gators had over 50 percent more saves than their opponents on average, anchored by the team’s goalkeeper and minute leader Nicki Rucki.

The work ethic on both offense and defense is an intense focus for Cameron.

“It all starts with practice. Once they cross that white line they know its time to compete” said Cameron. They increased their saves from 82 to 113 in one season’s time.

With the women’s soccer team turning over a new leaf in hopes of becoming a perennial playoff powerhouse, fans continue to slowly fill the bleachers of Cox Stadium. But no one is a bigger fan than their male counterparts sharing the same field.

“They are so supportive and [they] are with us every step of the way,” said Cameron.