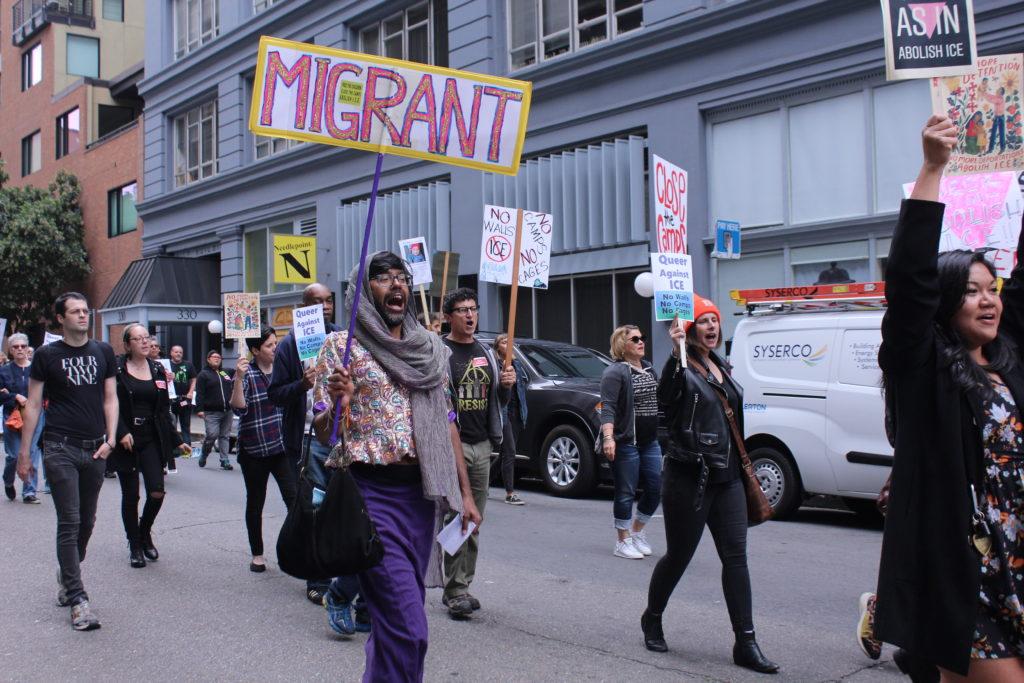 Two demonstrators held a giant floral bed sheet reading “Queers for Open Borders” in front of San Francisco’s U.S. Citizenship and Immigration Services headquarters on Aug. 19, as dozens beside them protested the agency’s treatment of the LGBTQ+ community at the U.S.-Mexico border.
Dubbed “Queers Melt ICE,” the gathering was one of this August’s daily demonstrations against the immigration agency’s border policies — a month-long succession of curbside protests named the “Month of Momentum.”

“The idea is that every community is affected,” event organizer Kate Raphael said. “We all need to be doing what we can, and we wanted to have a way for every community to show up. This would also be a way to show the breadth of the movement.”

Drought and crop failure have exacerbated the border crisis for Central Americans fleeing their countries due to poverty and insecurity, according to the nonpartisan Migration Policy Institute. Last fiscal year, MPI states, U.S. Customs and Border Protection apprehended more than 142,000 individuals from Guatemala, Honduras and El Salvador — a figure that has more than tripled this fiscal year.

The border crisis is especially dire for LGBTQ+ individuals who risk the journey.

A study by the United Nations Refugee Agency found that 90% of the LGBTQ+ refugees and asylum speakers the agency spoke to had experienced sexual and gender-based violence, according to the United Nations High Commissioner for Refugees.

“We know LGBTQ+ people are seeking asylum because they face violence in their home countries, but they face more violence in detention,” Carla Schick, a member of Queers Undermining Israeli Terrorism (QUIT), said.

Roxsana Hernandez Rodriguez, a transgender Honduran woman, died last year in ICE custody from “severe complications of dehydration superimposed upon HIV,” according to an independent autopsy filed by Rodriguez’s family as part of a wrongful death claim.

Amanda Bloom, another QUIT member, pointed to the federal policy of leaving thousands of asylum seekers to wait in Mexico while their applications are processed, which she said exposes them to an increased danger.

“We’re worried about the ways ICE treats trans and queer people, including the death of Roxsana Hernandez,” Bloom said.

The group handed out flyers listing demands that included putting an end to ICE, deportations, immigration raids, detention camps and “hateful white supremacist rhetoric that has provoked violence against immigrants in the U.S.” Demonstrators engaged in a series of chants, including “We’re trans, we’re queer, immigrants are welcome here,” and “El pueblo, unido, jamas sera vencido,” which translates to “The people, united, will never be defeated.”

J Jha and Keith Hennesy, a pair of writers from India and Canada respectively, performed an excerpt from a play titled “Queer Migrants,” a piece on their experience immigrating to the Bay Area.

The play comments on immigration policy as well as the history of colonialism linking the U.S. to the Central American countries many migrants come from.
“We are here because we got through those gates,” Jha said. “So we have a responsibility to those waiting at the door to get in and survive.”
Jha, who is transgender, said they left India out of fear they were not safe to be themself.

“I think our civil liberties are being quashed by the administration, and migrants are the most vulnerable,” Jha said, holding a tall sign with the word “migrant” written in shining gold.

Rafael, who organized the demonstration, stated that the “Culmination Protest of Everyone” is scheduled for Aug. 30 and is intended to end the Month of Momentum with a bang.