Friday night museum parties are free fun for all 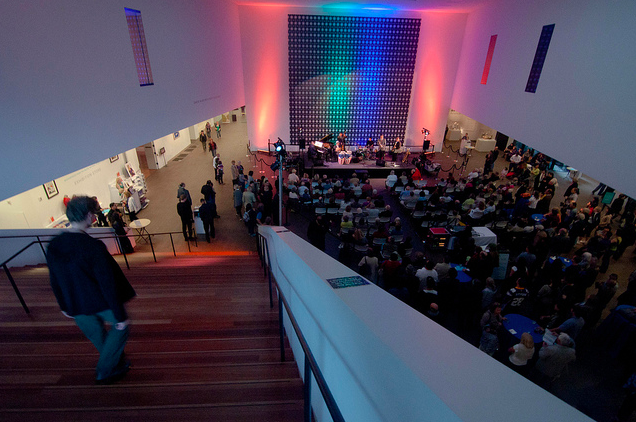 The John Santos Sextet performs during Fiesta Friday Nights, a free event aimed at connecting the community with the Museum, on Sept. 9. Photo by Gregory Moreno.

Life for a student can be rough financially. Between living expenses in the Bay Area and a constantly rising tuition, it’s hard to budget for any kind of social life outside of hanging out on your couch. But the de Young Museumin Golden Gate Park has your back.

When the de Young museum reopened in 2005 with a new layout, the museum received a hefty sum of money in grants and started Friday Night events. The events are free, however the permanent exhibits as well as the special exhibitions at the museum are still at regular pricing.

“We were lacking a connection with the community,” said Renee Baldocci, director of public programs at the museum.

She explained that through speaking with the community, they found that people felt that the de Young was elitist. “We weren’t well-loved,” Baldocci said.

On any given Friday between January and November the entertainment changes. There have been DJs, lectures by art historians, interactive art pieces and a craft table for kids. And the best part is, it is held in the free parts of the museum. Therefore, aside from the paid exhibits which are also open, the event is totally free of charge.

“We wanted to create something diverse,” said Gregory Stock, who works as an educator in public programs for the Fine Arts Museums of San Francisco, an organization that works behind the scenes at both the de Young Museum and the Legion of Honor.

The entertainment lineup changes weekly. Last week, the John Santos sextet played Afro-Latin music in the main lobby, while in another room there was a performance piece combining spoken word, dance and music.