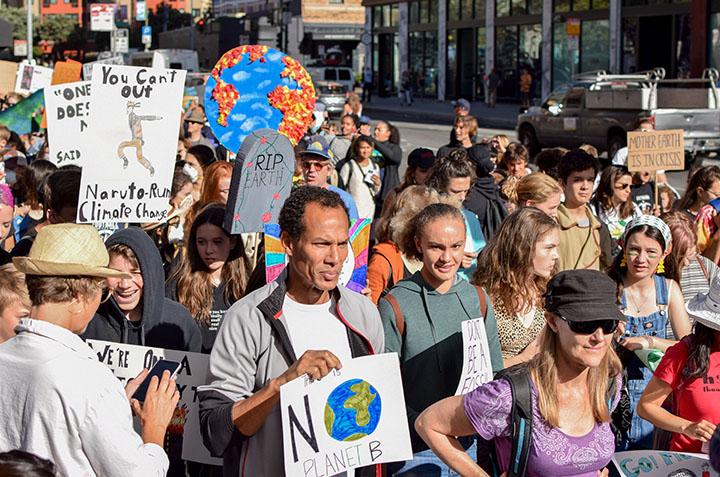 Four million people took part in Climate Strikes across 185 countries, according to globalclimatestrike.net.

Students stood in Malcolm X Plaza looking toward Sophia Benzoni, the Sustainable Initiative Coordinator of  the Environmental Resource Center. Benzoni rallied the students and got everyone ready to catch the M train on 19th and Holloway and head toward the corner of Market and 7th streets.

Students were met with thousands of protesters when they exited the train cars and joined the enormous crowd outside Civic Center station.

The strike was spurred by the activism of Greta Thunberg, a Swedish teenager who has garnered media attention with her climate activism and focus on school walkouts.

“Today we’re all out here at the climate strike, we’re heading down downtown San Francisco with signs and posters; we skipped school and didn’t go to our jobs today so we can be out here striking for climate change,” said Nicole Dodson, a child development and environmental science major at SF State.

Three days before the strike, 2o students gathered in the Cesar Chavez student center to create posters for the strike. They talked and laughed, while music played in the background. Each student has a piece of white poster paper in front of them.

They decorated the posters with illustrations of Earth with slogans such as “There is no planet B.”

“I feel like there’s a lot of energy and excitement around this whole event,” said Amanda Bancroft, an environmental studies major, focusing on sustainability and social justice. “It’s sweet to be around people who are willing to go out there and make a splash in the calm waters.”

Bancrofts poster reads ‘Business as usual? = Human extinction’ and is adorned by an illustration of Earth and a green tree.

She said her sign is meant to point out how corporations are major contributors to the global climate issue and believes it is important to switch out the current economic system.

Strike participants chose a strategic route through downtown — targeting corporations and policy makers beginning at the Federal Building on Seventh Street, where Speaker of the House Nancy Pelosi’s office is located and made stops at Black Rock, Bank of America, Amazon Go and PG&E.

Youth vs. Apocalypse was one of the main organizing groups of this strike in San Francisco, and part of the grassroots movement 350BayArea which aims to reduce CO2 emissions from its current level of 400 parts per million to 350 parts per million by raising awareness and demanding action of legislators.

According to the Youth vs. Apocalypse website, the strike intended “going to different targets that are contributing to climate breakdown, leaving our mark to let these places know what we are fighting for.”

“A lot of people out here today can’t even vote yet, so how else are they supposed to get their voice out if they can’t come to the streets and strike,” said Nina Omomo, an environmental studies major with a concentration in Natural Resource Management and Conservation.

When the march approached its end at Justin Herman Plaza, there was no decline in fervor or enthusiasm. Protestors sang Woody Guthrie’s “This Land Is Your Land” as they walked into Sue Bierman Park on Drumm Street.