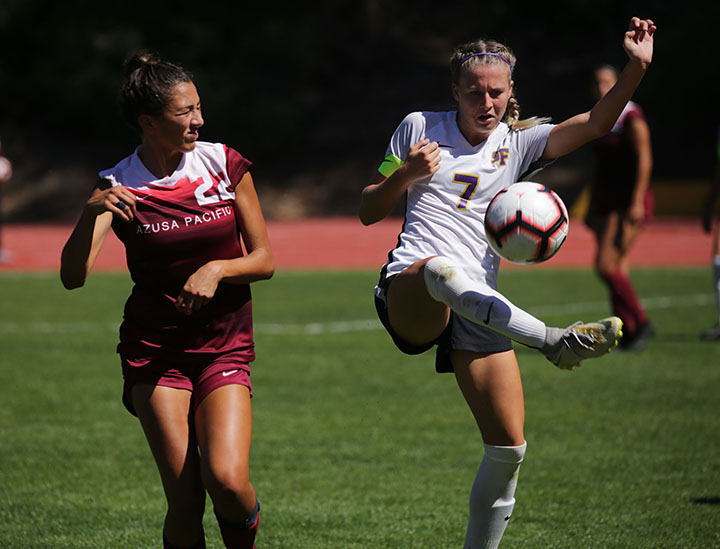 SF State women’s soccer lose their two-game winning streak, receiving their first loss at home on Saturday, Sept. 21, against the Azusa Pacific Cougars, with a final score of 3-1.

In the 23rd minute, SF State sophomore Kylie Schneider gave the Gators momentum, scoring by moving the ball near mid-field and sprinting through the defense for a score.

Schneider blitzed two defenders with an assist from sophomore forward Katelyn Patterson to take the lead, making the score 1–0, marking the fifth goal for Patterson this season.

The momentum quickly changed pace when Cougars forward, junior Randi Macadangdang, intercepted a pass from sophomore goalkeeper Sommer Harrington and kicked the ball past Harrington into the net, tying the game 1–1 before the end of the half.

Throughout the second half, the Gators struggled offensively on key passes, failing to execute shots when it mattered.

The Gators controlled time of possession in the second half, but were holding onto the ball too long with only five shots attempted on goal.

“Not making silly mistakes, giving the ball away and holding onto the ball too long cost us the game,” said head coach Brittany Cameron.

Azusa Pacific’s senior forward Emmy Koflanovich darts a pass to teammate Jordan Hill, who outran the Gators defense and nailed a goal over Harrington’s head, giving the Cougars a 2–1 lead in the 60th minute.

The third goal from Azusa Pacific wouldn’t come until the 72nd minute when Amy Bishop intercepted the ball from the Gators’ offense and passed to an open Macadangdang. Macadangdang easily scored and sealed the win for the Cougars, advancing the score to 3–1.

At the 85th minute, the Gators had the opportunity to make it a one-score game off a free kick, but senior Niko Baila’s shot was too high and went above the crossbar when it seemed Azusa Pacific’s sophomore goalkeeper Jennifer Kovisto was caught off guard.

Defensive miscues and mental errors are what ultimately plagued the Gators in the second half.

“We have to be better, individually just has to be better, as a soccer team we were much better than them, three silly mistakes cost us,” said coach Brittany Cameron.

The women’s soccer team has a record of 2–2–1 and hopes to bounce back next game against the Humboldt State Lumberjacks (1-2-2) on Wednesday, Sept. 25.