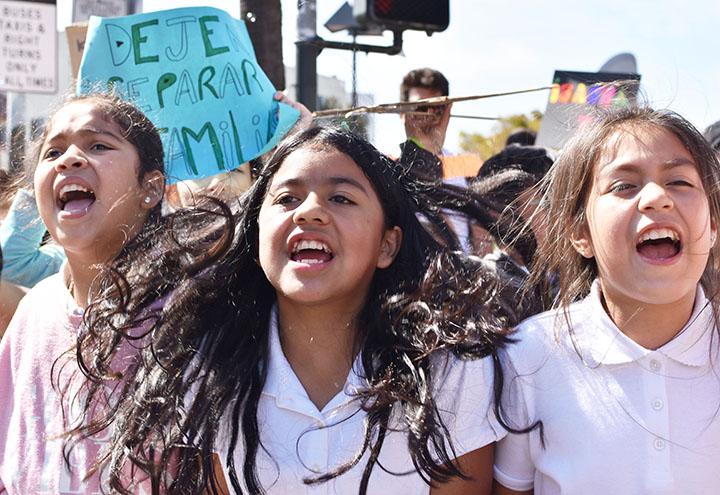 Local school children marched from San Francisco’s Mission neighborhood to City Hall Sept. 16 alongside hundreds of demonstrators to protest the imposed separation of migrant families at the U.S.-Mexico border.

Protesters traveled from 24th and Mission streets chanting, “Si, se puede!” (Yes, we can!) and “People Power!” They carried signs condemning the government’s detainment of underage migrants apprehended at the border.

Mayor London Breed spoke to the crowd at City Hall, affirming San Francisco’s support for immigrant rights and the Latino community as a whole. The next day, the San Francisco Board of Supervisors unanimously approved a resolution supporting the closure of the camps.

President Donald Trump’s “zero tolerance” policy for illegal border-crossing took effect under former Attorney General Jeff Sessions in May last year. Since then, Immigration agents have separated at least 2,654 immigrant children from their parents and housed them in detention centers for attempting to enter the U.S., according to the American Civil Liberties Union.

The U.S. government acknowledged in May that six children died in custody of the Border Patrol or the Department of Health and Human Services, both of which help run the detention camps.

The most recent was Carlos Hernandez Vásquez, a 16-year-old from Guatemala, who died of influenza this May. The Trump administration announced August that immigrants held at detention centers would no longer be vaccinated against the flu.

“Every single person that hears this — hears about our march, reads about it on the news — needs to understand that if they’re silent and if they just sit back and watch, then they’re actually complicit,” said Don Arana-Fogg, a member of Un Dia Sin Inmigrantes (A Day Without Immigrants) San Francisco, one of the groups that helped organize the protest.