It’s no secret that San Francisco’s Mission District has a surplus of Mexican food. It’s nearly impossible to walk a few blocks in the Mission without coming across one of its many Mexican restaurants. Tucked away on a seemingly residential block of Folsom Street is Chuy’s Fiestas, a small diner that just opened two and a half months ago, but they’re ready for the competition.

According to co-owner Jesus Licea, Chuy’s is different from the others. Everything Chuy’s serves is prepared fresh every morning, and they don’t use ingredients from the previous day. The highlight of the menu is the barbacoa, which they slow roast for at least four to five hours in the morning before the business opens, in order to guarantee their tacos are as tender and flavorful as possible.

The restaurant’s barbacoa tacos, the highlight of their menu, are served with a cup of the residual broth that the meat was cooked in. The tacos can be dipped in the broth, or the broth can be eaten alone like a stew.

“The food is very traditional,” said Licea. “You can see where we’re coming from.”

Licea, who is originally from Mexico, has been in San Francisco for 24 years. He spent much of that time working in restaurants and catering. He and the other two co-owners are all from Michoacan, a state well known for being the birthplace of carnitas.

He and his partners had always talked about opening their restaurant, and after two months of looking for a restaurant, finally found a location. They talked to the previous owner for a month before he decided to sell it to them.

They plan on having a taco tuesday deal as soon as they receive their beer and wine license. 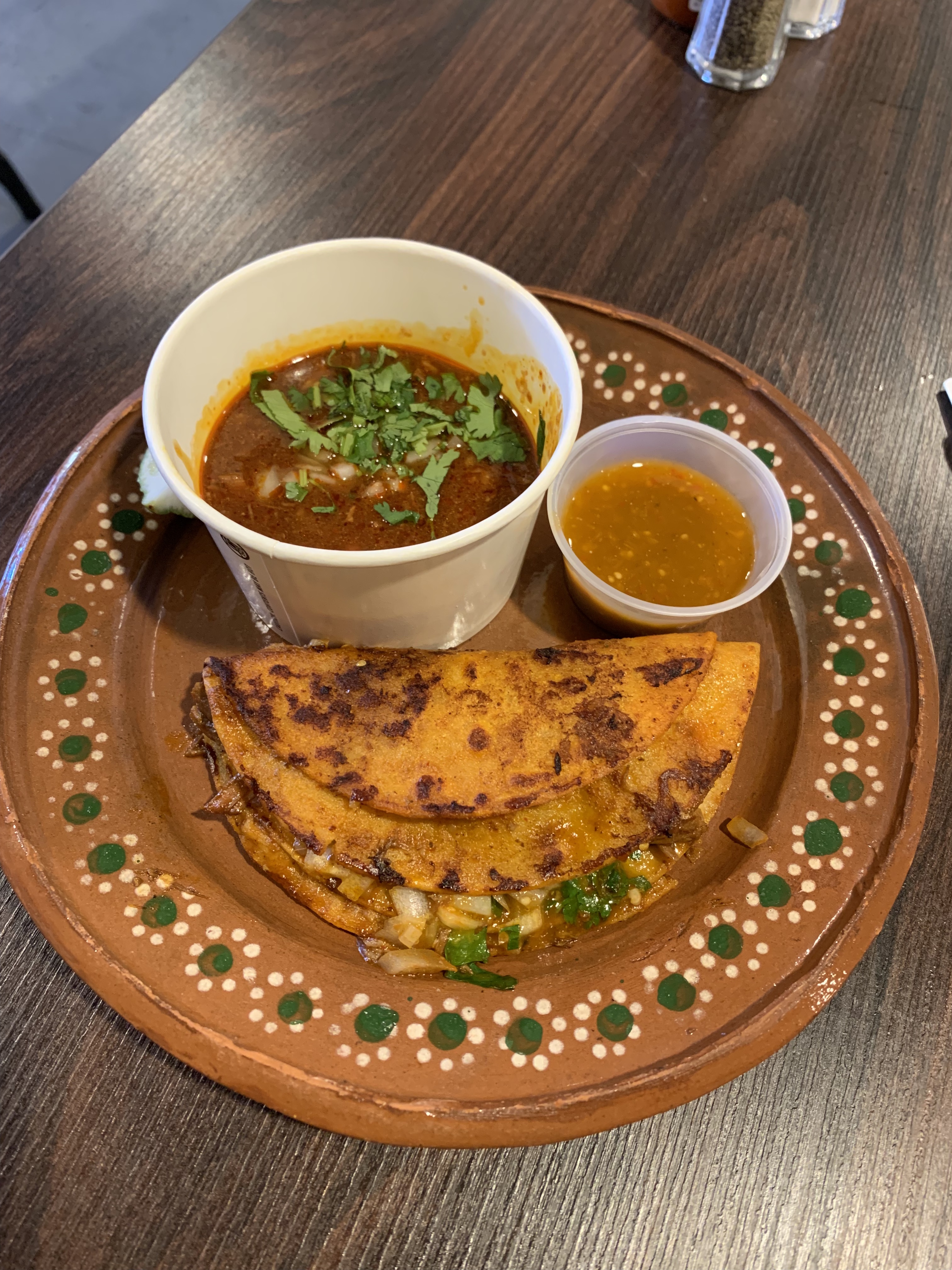 A barbacoa taco from Chuy’s Fiestas. The restaurant’s barbacoa tacos, the highlight of their menu, are served with a cup of the residual broth that the meat was cooked in. The tacos can be dipped in the broth, or the broth can be eaten alone. (Photo by Briana Battle/Golden Gate Xpress)

Dev Oli spent six years saving up money to fulfill his dream of opening his own Indian and Nepalese restaurant. But when Oli opened DBC Restaurant two months ago, he didn’t know what to expect. It is located on Fillmore Street, an ever-changing area. DBC is directly next to a liquor store, which people often loiter in front of all day. The only day that the street is seemingly empty is Sunday, when the liquor store is closed.

Oli fears that the crowd of people regularly hanging around outside of his restaurant is having a negative impact on business.

“I don’t think we can survive at this location,” Oli said. He wants to relocate to the Financial District, which he says is calmer than his current location.

There’s a lot of competition for Indian food in the city. A quick Yelp search brings up around 100 Indian Restaurants located within San Francisco city limits. According to Oli, what makes his restaurant stand out is the combination of both Indian and Nepalese food that they serve.

Oki Sushi in Noe Valley is just an average sushi restaurant, but this averageness won’t last long. Owner Kathy Lee wants to tailor the menu to give the customers what they want. The restaurant is open seven days a week, and each day they offer a different promotion. According to Lee, Oki will also begin having happy hours in the near future.

“We just opened,” said Lee. “So we still want to decide what’s going to be popular.”

After working at a sushi restaurant for eight years, Lee was finally able to open her own last week. Opening your own restaurant is not easy work, according to Lee. Finding employees that have experience is an essential start of starting a successful business.

Oki is located on Church Street nestled between Toast Eatery and VIP Scrub Club dog groomers. The Muni J train stops right in front of the building, at 30th and Day.