The SF State Women’s soccer team ended their regular season on Nov. 9, with a home loss against the Dominguez Hills Toros (8-7-2) with a final score of 1-0. The Gators ended their season 2-14-1 with a 13-game losing streak. 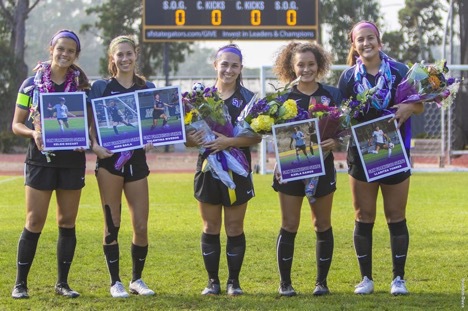 The Gators were not able to match last year’s playoff run when head coach Tracy Hamm was in charge. Last season they made it to the second round of the playoffs in the CCAA Soccer Championships where they eventually lost to UC San Diego.

New head coach Brittany Cameron struggled on the road throughout the season. Out of eight away games, the team lost seven with one tie. While the Gators started off well in the early part of the schedule, going 2-1-1 after the team’s first four contest, everything went downhill from there as the Gators would go on to lose their remaining thirteen games.

Five of the Gators’ 27 total players on the roster were seniors, therefore there will be a majority of the team returning for next season, and 18 of the ladies were either freshmen or sophomores. While the team lost fourteen matches, six of them were by one-goal, and a more experienced group will take the field next year, looking to change the story.