Alex Lalama spoke the words of bell hooks while standing atop a small platform in the lobby of Ceaser Chavez, as students began to stop to listen to her speak words of compassion toward incarcerated women: “The moment we choose to live we begin to move against domination, against depression. The moment we choose to love we begin to move towards freedom. To act in ways that liberate ourselves and others. That action is the testimony of love as the practice of freedom.”

Lalama, a senior at SF State and fall semester intern for the on-campus program Project Rebound, organized the first Unheard Womxn event in collaboration with the campus Women’s Center. The event provided students the opportunity to pen letters on the back of ornately decorated postcards, to provide words of encouragement and show solidarity to incarcerated women. The cards will be distributed by the California Coalition of Women Prisoners to San Francisco, San Mateo and San Bruno County jails.

Lalama got the idea for the event after working closely with women in county jails, where she discovered a majority of incarcerated women are mothers of young children and often feel isolated in jail. According to a study conducted by the Vera Institute of Justice, nearly 80% of women in jails are mothers, mostly single parents. 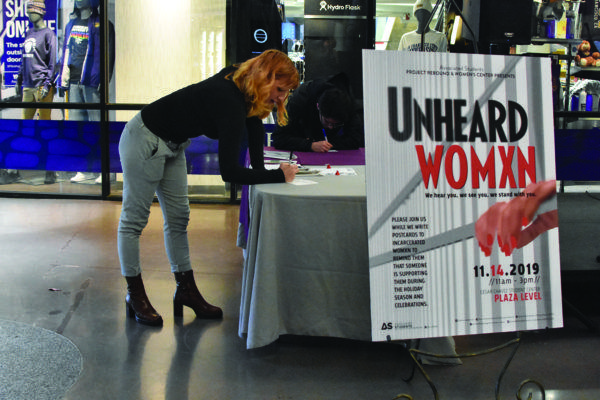 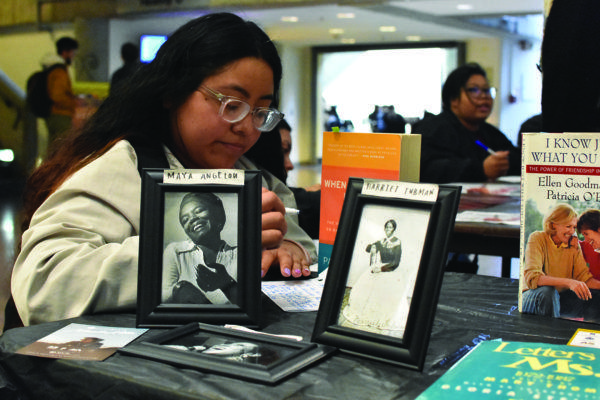 “During the holiday season they feel very lonely. To be away from their families and children,” said Lalama. “We want to tell them that someone is thinking about them and they don’t have to be alone through this.”

Unheard Womxn was put on in collaboration with the Women’s Center, a safe space on campus for women (and everyone else) to go and destress, breastfeed, grab free organic tampons and pads and study.

The event uses the notation womxn, rather than women. The x represents the most marginalized groups of women within society, transgender women and women of color. Exclusionary feminism, also known as white feminism, does not allow the voices of trans women and women of color to be fairly or accurately represented. This allows for the words ‘women’ and ‘woman’ to be whitewashed. The x reclaims the word and gender of womxn to include everyone who claims identity.

“This is our first collaboration with Project Rebound, and for the amount of work that they do and the community they reach out, that’s something we don’t necessarily touch up on. It’s great to get a different perspective and realize there’s a whole community out there that we can potentially reach out to,” said Marcy Palacios, the assistant director of the Women’s Center.

Lalama wanted to show formerly incarcerated students that they have a safe place on campus through this event.

“I feel like there’s a lot of displacement. From jails to schools, and how do I fill in that gap? How do I remind them that there not so distance, that [school] where they belong, and that they’re important and matter here on campus?” said Lalama.

“A lot of the work that we do is counseling, we help out with books and transportation. We try to set you up with a community so school doesn’t seem so scary,” said Lalama.

The majority of incarcerated people in the United States are men, but the prison population that is increasing most rapidly are women of color. The rate of black women being incarcerated is twice that of white women, according to the NAACP.

“We know that housing and employment are two of the main barriers to people, for returning citizens … For our female students we have a very hard time finding any transitional housing possibilities because there’s just not a lot of awareness.” said Doris Fendt, the Director of Project Rebound.  “And that’s what we hope to achieve on a very small level with this event.”