Touring in Thailand; a wrestler’s story 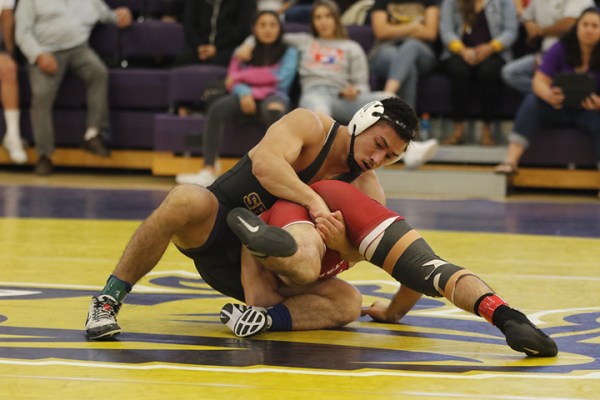 Out of all the wrestling matches Justin Pichedwatana competed in, he recalls the one match that went to the very end, testing all of his abilities.

“There is a specific match at Nationals that really brought out the fire in me, pushed me beyond my limits. I was wrestling I believe he was the third seeded guy, it was a dog fight the whole match.”

Having the All-American title meant claiming a top eight rank in the country within his weight class. It meant a whole lot to Pichedwatana.

“It gives me a sense of humbleness and pride and I love the feeling of being an All-American because it shows all the hard work I’ve put in and makes me want it more,” Pichedwatana said.

Growing up in Long Beach, California, Pichedwatana envisioned himself becoming a police officer like his older brothers, but soon discovered his wrestling talent which would take him to new heights.

Since he was five years old, Pichedwatana was a competitor who loved playing sports. He played hockey for 12 years and loved the physicality and comradery on the ice.

Through his older brothers, he discovered wrestling in his freshman year of high school.

“As I was a freshman, my second oldest brother, Chris, was a senior in high school when he started wrestling and he really brought me into the sport,” said Pichedwatana.

His competitive nature made him want to follow in his brother’s footsteps. After trying out for the team, Pichedwatana ended up on the same team as his brother, a rare feat for a freshmen that allowed him to compete against seniors. Pichedwatana continued wrestling all four years of high school.

“I never really realized that I had a talent for wrestling probably until my senior year of high school,” Pichedwatana said.

From there, he finished fourth at the California State Meet in 2016 and earned the title High School All-American. However, there were times where Pichedwatana contemplated stepping away from the sport permanently.

“Each year of high school that I was wrestling, it really took a toll on me, like every single year I told myself I was going to quit,” Pichedwatana said. “After my junior year, I was really debating if I wanted to wrestle again because I was so hard on myself mentally and physically, I didn’t really know if I wanted to do it anymore.”

He talked with his friends, coaches and family about the decision but what was really the tipping point to make or break his wrestling career was talking with his older cousin, John Scott. His cousin was a role model for Pichedwatana who told him how wrestling can be a way for him to go to college.

“He just changed my mindset and eventually I just put 100% into my senior year and ended up doing great and just going far in wrestling and ended up going to SF State and here I am today,” Pichedwatana said.

According to Pichedwatana, that talk with his cousin had the biggest impact on his wrestling career. Pichedwatana approached wrestling the mindset that he was going to become the very best and would not doubt his potential. In his senior year of high school, he ended up placing fourth at the California State meet where he not only received High School All-American but would receive college offers from Division I and Division II schools.

Pichedwatana wanted to be close to home for college. He said going to SF State would give him a greater experience with the Division II program they had.

According to Coach Welch, Pichedwatana came to the sport late in life as opposed to many wrestlers who as kids, but he recruited him for his potential. From there, in 2018, Pichedwatana took first place in the 41st Annual California Collegiate Open, while claiming third place in the 174-pound bracket with a 3-1 day at the Menlo College Open. He was named to the NWC All-Academic Team.

He would only improve from there, in 2019 he recorded an eight-bout win streak from Nov. 30 to Jan. 5 with six consecutive wins in one week. He ranked fifth in the nation in the 184-pound weight class and was 2019 NCAA Division II All-American.

When Coach Welch heard that Pichedwatana’s father was born in Thailand, he told  Pichedwatana that he could be eligible for dual citizenship. Walsh talked with him and his family and made sure everyone was on board to be able to get his dual citizenship. He went to Thailand this past March for an official tryout with the international wrestling team. He now represents Thailand at international tournaments, losing his first and only match to Ukraine in a close bout.

“He was a kid who had a lot of talent but wasn’t utilizing it, now he bought in and works really hard. He knows how good he can be,” Coach Welch said.

The Olympics is the biggest event coaches wanted Pichedwatana to go for with the hope of winning a national title to obtain All-American status.

“His speed is his biggest attribute, especially for a big guy, 184 pounds and faster than the lightweights in the room,” Coach Welch said.

He is currently wrestling at the international level against 19 to 23-year-olds. He will soon compete at the senior level which is the open age group. Last year he took seventh in the NCAA tournament and made him a Division II All-American.

“He is the most successful international wrestler we have on the team,” Coach Welch said.

Since joining the Thailand team, Pichedwatana travels to local tournaments, considering it a very honorable experience, especially at his age.

“So Coach Welch brought the opportunity to me and asked me about getting my dual citizenship because he wants me competing for the Thai National Team as it would be a bigger fight experience,” Pichedwatana said.

After Pichedwatana graduates in 2021, he plans to apply to become a police officer alongside his two older brothers. The second oldest is currently in the academy for LAPD while the oldest has been a police officer for five years. He doesn’t see himself coming back as a wrestling coach due to having other goals, but does see himself coming back to State and helping out the wrestling staff in some capacity. As far as competing in tournaments right now, Pichedwatana is strictly focused on his wrestling style and competing for SF State.