Pronouns matter, so learn them 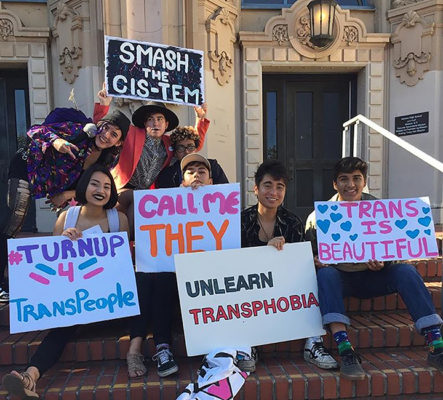 When I first tried explaining the concept of the singular, gender-neutral pronoun “they” to my father in 2013, he chuckled from behind the steering wheel and made a comment about incorrect grammar usage. I remember this because about 20 minutes later, after slamming on the breaks while exiting the freeway, he gestured angrily at the car that cut him off and yelled: “They could’ve killed us!”

Most English speakers use the singular “they” often, whether they’re talking about a hypothetical, universal person or someone whose gender is unknown: the Domino’s employee en route to deliver their pizza, for instance, or the jerk who just cut them off on the freeway. In these cases, grammatical concerns are rarely mentioned outside English classrooms where teachers still urge students to drop a clunky “he or she” in the middle of otherwise graceful sentences. Why, then, does getting people to use “they” when talking about nonbinary people often feel like pulling teeth?

Sam Moore and friends sit on the steps of Mission High before a June 24, 2016 Trans March before Trans Pride at Dolores Park in San Francisco, Calif.

“They/them pronouns have been a pretty fulfilling way to attempt to vocalize and give form to some of the ways that I understand my gender identity as a nonbinary person of color,” said Gilbert Gammad, a former youth program coordinator at the San Mateo County Pride Center who is now completing their Master’s at UC Berkeley’s school of social welfare. Gammad came out as nonbinary — someone whose gender doesn’t fit into the constructs of manhood or womanhood — and made the switch to they/them pronouns in 2014.

“It’s served to help me shape myself in the public eye, and has brought into my life some really beautiful and fulfilling experiences,” they said.

“They” has been used as a singular pronoun long before transgender identities started to accrue any sort of mainstream attention. The pronoun has been used to refer to individuals since the late 1300s, according to Merriam-Webster, whose addition of the singular “they” to the dictionary got plenty of people’s panties in a bunch last September. In the fourth act of Shakespeare’s “A Comedy of Errors,” for example, the character Antipholus says, “There’s not a man I meet but doth salute me / As if I were their well-acquainted friend.” Emily Dickenson wrote in an 1881 letter, “Almost anyone under the circumstances would have doubted if (the letter) were theirs, or indeed if they were themself.” The list goes on.

In 2017, California became the first state to provide a gender-neutral option on birth certificates and ID cards through Senate Bill No. 179, or the Gender Recognition Act. Since then, 16 states have passed similar bills, the most recent being Massachusetts last month. Most people still struggle to incorporate gender-neutral pronouns in their everyday vocabulary despite this.

“It’s about 50/50 around whether people refer to me with the correct pronouns,” Gammad said. “I’ve found that unless we work closely or have a deepened relationship, folks don’t often put in the effort to get my pronouns correct. I think it takes a lot for folks who are more resistant to really slow down their process and understand how harmful misgendering can be.” To misgender someone is to refer to them with the wrong pronouns, and every trans person knows how awful it feels.

Since parting ways from my assigned gender nearly eight years ago, I’ve noticed some trends when it comes to getting misgendered. First are the forgivable mistakes made by friends, family and colleagues soon after we start using different pronouns. Then there are the slip-ups that come months or years after we’ve started transitioning, from both strangers and those we’ve known our whole lives. These instances, I’ve decided, happen when we’re not seen as who we are — when people haven’t done any work to unlearn the deeply-rooted gender norms that are planted into all of us. Though well-meaning, these people’s ideas of gender run on a constant autopilot, one that will reflect in their language until they decide to grab hold of the wheel.

I use the pronouns he/him, and since beginning my medical transition in high school I get misgendered infrequently, if ever. My external features now reflect what we’ve all been taught about maleness; even those running on autopilot see me as a man. For trans people who haven’t been granted this privilege, especially those who are nonbinary, it’s a different ball game.

“No matter how much I express myself in a gender-non-conforming fashion, by facet of my brown-ness and other codifiers of masculinity like my beard, I will always be assumed as a man and misgendered,” Gammad said. “I can wear a full dress with fishnets and makeup, and it won’t matter.”

Traditional gender norms leave no room for identities not categorized as male or female. For nonbinary people this means existing in a world that can’t wrap its head around you. The normalized use of gender-neutral pronouns — only the tip of a very large, queer iceberg — will take more to become a reality than us changing how we speak. It’ll take a massive reimagining of what gender is and how it can be expressed in people.

Fortunately, this isn’t as impossible as it sounds, and begins with small, incremental changes to our daily thought patterns. These changes require taking the time to notice when we’re running on gender-autopilot by asking ourselves questions like: Why do I feel the need to distinguish everyone as male or female? How do I judge others based on gender norms? Am I limiting my own self-expression by refusing to broaden what gender means to me?

If you’re struggling with a person’s pronouns, see if this new awareness helps the words flow more naturally. And of course, practice: Use their pronouns out loud in full sentences as many times as you need to until they stick. With enough time and intention, they will.

My dad has come a long way since that car ride. Though he still stumbles, he now makes an earnest effort to incorporate gender-neutral pronouns into his everyday vocabulary. I even get excited phone calls from him whenever he meets a nonbinary person or sees one on television: “They’re a they!” He’ll exclaim, then, “Did I say that correctly?”

I always smile — no, Dad, not really; but you’re moving in the right direction.