Queer Homecoming dances the night away 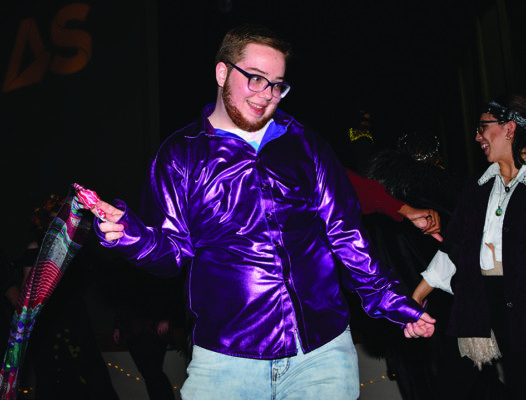 In high school, we dream about the perfect night. Dates, flowing dresses and tuxedos, corsages, awkward hand holding in the back of a stretch limo, photo memories of teenage cringiness, all on a night that everyone tells us we will remember for the rest of our lives.

Everything Great About You (EGAY), a residential life student organization for queer and trans students, hosted its third Queer Homecoming in Jack Adams Hall on Dec. 7 to celebrate acceptance against a backdrop of twinkling rainbow colored lights.

EGAY organizers decided to host the event to give queer and trans students a place to celebrate and comfortably express themselves. Queer homecomings and proms started as a type of anti-prom or morp (prom spelled backwards), an alternative to regular high school proms. The Hayward Gay Prom is one of the oldest and continually running queer prom that started in 1995.

“This is a place for students to come and have an experience they possibly didn’t have in high school,” said Felix Bishop, co-president of EGAY. “Because a lot of places are still not accepting or won’t allow queer dates, or have binary rules about homecoming royalty.”

EGAY collaborated with the Queer Trans Resource Center (QTRC) to make this event happen. QTRC is the highest level LGBTQ+ dedicated resource center at SF State that works with queer and trans students to guide them toward resources on and off campus. QTRC also offers Safe Zone Ally training to faculty, staff and anyone else interested in becoming active, visible and supportive allies.

“It’s important to celebrate the community not just focus on trauma, not just focus on stereotypes,” said Vanessa Hamill, the student director of QTRC. “This event is not just important for visibility but also its the legacy of how our bodies and experiences have been policed for so long.”

EGAY started in the 90s, according to Bishop and Hamill, and joined other queer and trans student organizations on campus like Queer Alliance. As a component of Residential Life, EGAY is primarily aimed at students who live on campus. EGAY meets weekly for sessions meant to educate and create bonding within the queer community on campus, Bishop said. At a recent meeting, the group dicussed queer representation in the media. TreVaughn Roach-Carter, vice president of EGAY, pointed toward typical teen movies that depict high school dances as not being the experience of most queer people.

“With those movies, those big, beautiful dance experiences, it’s always straight people in the spotlight,” Roach-Carter said. “So trying to recreate something as big and glamourous but for queer people is really important because they’ve see nothing but that straight high school prom experience, so we can try to give them that for themselves.”

Queer Homecoming guests dressed up according to the fantasy theme in outfits inspired by elves, royalty or mythology and folklore. Roach-Carter attended in full royal regalia inspired by a scene from the TV show “Pose.” He flung his sparkling sky blue coat around as he danced.

After the dancing and festivities including crown decorating and tarot card reading, EGAY crowned its Queer Homecoming royalty which included categories for Queen, King and a non-binary option Majesty. The coronation was decided by equal opportunity drawing giving everyone the option to participate.

“For a lot of people, high school dances tend to be pretty heteronormative,” said Autumn Goldstein, a creative writing major who attended the dance in a blue and silver elven dress. “There’s pressure to fit the norms and expectations. Here, people can be themselves and just have a good time.”