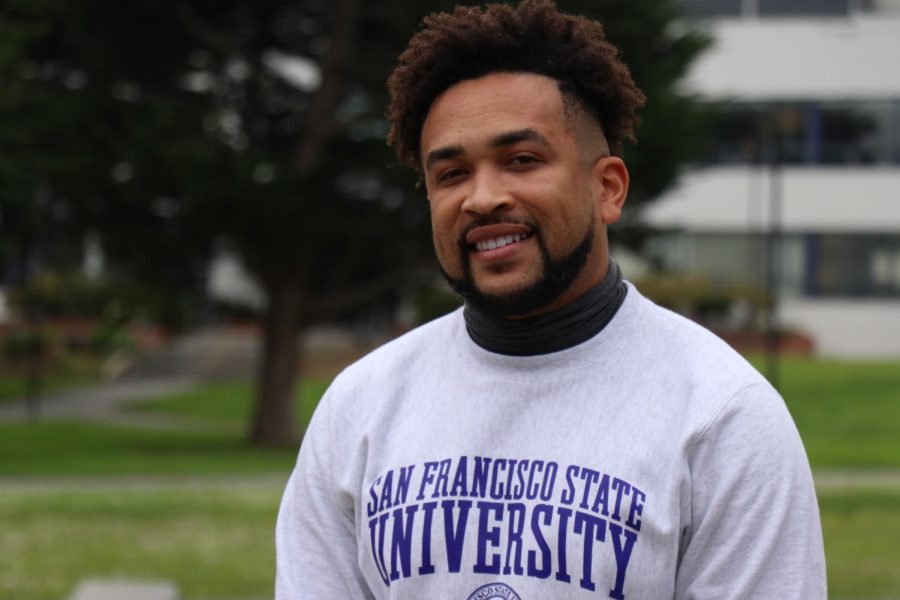 The new director has come at a unique time for ASI. In October, the Board of Directors gave Vice President of Finance Andrew Carillo their approval to begin planning a referendum to increase student fees. This process will take at least a year, according to Carillo, during which the board will have to convince students to vote in favor of the proposal.

Spring also means ASI elections, but less than 5% of the student population participated in the ASI presidential election last year. Sherrill said increasing voter participation is one of his main priorities this semester.

As previously mentioned, Sherrill is the first permanent executive director in more than half a decade. Ever since ASI completed a merger with the student center in 2013, only interim directors have filled the role.

On Wednesday, Jan. 22, Sherrill gathered the ASI staff within Jack Adams Hall for lunch and a proper introduction. Balloons with question marks hovered above each of the hall’s ten tables. The new boss stood in front of the stage wearing a brown plaid blazer, light blue, almost off-white skinny jeans with a tear in the left knee, and a brown top.

Sherrill is known by those close to him for his fashion sense. As a going away gift from California State University Channel Islands , his colleagues presented Sherrill with two GQ magazines, each cover depicting well dressed men with Sherrill’s head edited onto the bodies.

In Sherrill’s office, two of these magazines sit on a shelf along with a picture frame and two Funko Pop figurines- the titular protagonist and Kilmonger from the movie Black Panther.

When most chairs were occupied, Sherrill stepped toward his podium and addressed his staff with an enthusiastic “Good morning!” When the reply was somewhat meek, Sherrill began a story about his grandmother. He explained that in his youth, when told good morning, he was expected to say it back.

“See I was raised on a culture of call and response,” Sherrill said. The ASI staff answered with a few chuckles and a louder greeting. Sherrill moved on.

“As you can see there are balloons with question marks. That’s because there are questions in the air,” Sherrill acknowledged.

Sherrill speculated that the biggest questions the staff had were surrounding who he is and what kind of boss he is. Throughout the talk, Sherrill described himself as an agent of positive change, a descendant of resilient people, a doctoral student and someone who is unapologetically black.

Before coming to the Bay Area, Sherrill worked at CSU Channel Islands. He began as an assistant director, then rose to associate director approximately one year ago. Sherrill said that an executive director position was the “logical next step” in his career, but he also admitted he felt a personal fondness for the campus.

“When I did my first interview here… It was the first time in my career, working in student centers, that I felt represented in the space, and that made me feel like this is a place that I want to cultivate,” Sherrill said.

Growing up with teachers as grandparents and two mothers who both earned graduate degrees, instilled the value of academia in Sherrill at a young age. His father, who was a preacher, gave Sherrill a moral compass and an appreciation for culture and community.

These influences were apparent in his personal presentation. When speaking Sherrill was clear and poised in a manner common to those with experience in addressing large crowds. He was also expressive, using his hands, head and eyes to illustrate his points. The “culture of call and response” that he mentioned earlier also repeated developing into a pattern of statement and affirmation.

Sometimes it was part of an activity. At one point he read out several statements and asked the crowd to snap their fingers if they agreed. Other times, it was in a more casual form. “Can I tell you something? Nod if I can tell you something,” Sherrill said.

Toward the end of his presentation, Sherrill presented what he referred to as the “25-50-25 rule.” This rule essentially states that in transitional times for organizations like this one, 25% of the staff will instantly support change, 50% will be open to change but need convincing and 25% will be inherently opposed to change. Sherrill then surmised in saying that if the majority stay their course, the final 25% will either change direction or decide this is not for them.

“I pray to God that you all are in that 50% or that good 25% because we are going somewhere,” Sherrill said.