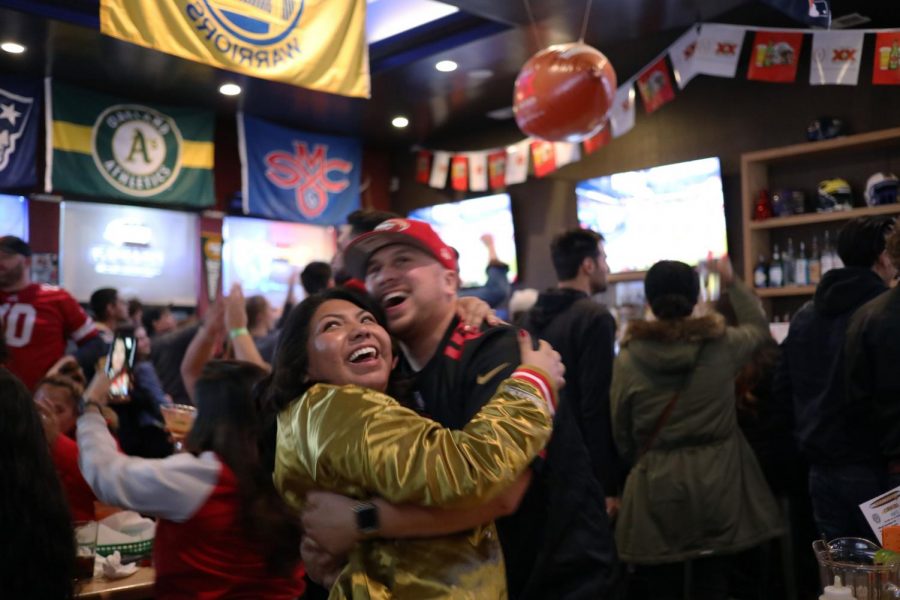 Karen Bueno Manny Ramirez embrace in a hug after the San Francisco 49rs score a touchdown in the second half of Super Bowl LIV at Underdogs Too in San Francisco Calif., on Sunday February 2, 2020. (Emily Curiel)

Super Bowl LIV took place this past weekend in a highly anticipated match between the Kansas City Chiefs and the San Francisco 49ers. The Chiefs lifted their first Lombardi trophy after 50 years by defeating the 49ers 31- 20.

The game saw both teams playing their best on both sides of the ball. San Francisco’s defense managed to pick up two interceptions on Mahomes, while the Chiefs tallied two interceptions on Garoppolo as well. The game went into halftime tied 10-10, a score that did not represent the excitement and high energy played in the first half. The 3rd quarter was dominated by the 49ers as they headed into the 4th with a 10-point lead. The downfall of the 49ers would be Garrapolo’s inability to make plays to put the Chiefs away, giving Mahomes 3 drives in the last 8 minutes of the game in which the Chiefs put up 21 unanswered points.

Andy Reid finally won his desired and much deserved Super Bowl Trophy that he has been chasing for many years, and he can thank Patrick Mahomes for helping him achieve that goal. Mahomes, at only 24 years old, won the SuperBowl MVP award, making him the first quarterback  under 25 to win a ring and MVP. As Mahomes’ impressive resume continues to grow, he has proven his position as a franchise quarterback and leader for the Chiefs. We can expect to see more greatness from Mahomes as he continues to develop and will look to lead his team to another Super Bowl appearance next season.

As for the 49ers, after rebuilding for many years and finally reaching the Superbowl since 2013, what lies ahead? Was it Jimmy Garrapolo’s Fault? Was it Head Coach Kyle Shanahan’s Fault? It’s unsure how the team will react, but considering the current team they have, they reached a superbowl, they have a shot at making a run again. Although they had the best defense in the league, their secondary, specifically Richard Sherman, was exposed greatly by the Kansas City Chiefs. If any defensive moves are made, we can predict a change in the secondary could happen this off-season. As for the rest of the team, there shouldn’t be any drastic changes to coaching staff or offensive players.

Perhaps the greatest change that could come forth for next season isn’t for the Chiefs or the 49ers, but for the Las Vegas Raiders. Tom Brady announced during the Super Bowl in the words “I’m not going anywhere”, that his future is up for grabs where the Raiders, rival of both Super Bowl teams, are one of the front runners for his services.