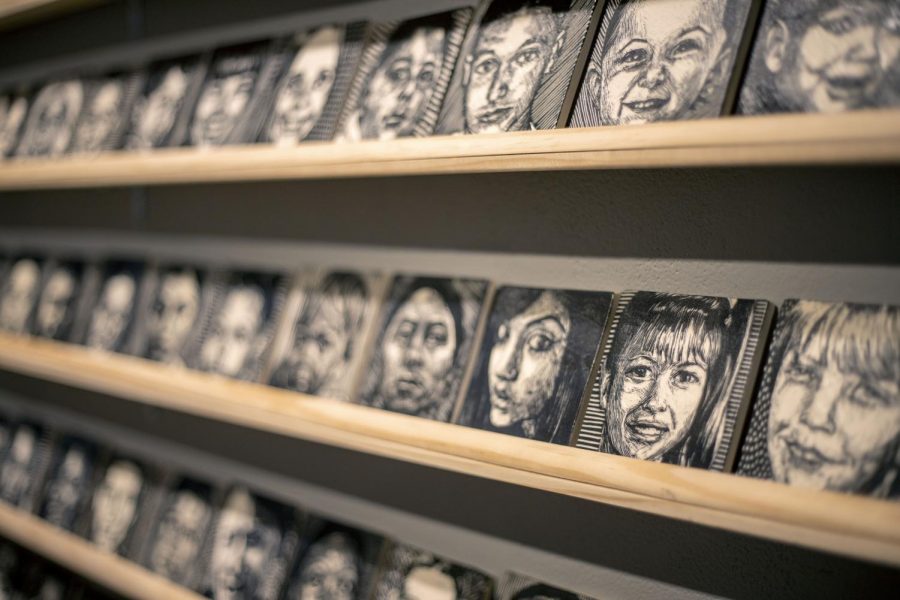 The Castro Art Walk, a monthly event that has taken place for the last three years. On the first Thursday of each month, local artists’ work is exhibited at small businesses around the neighborhood. This month’s art walk took place on February 6.

Each month the businesses and artists that participate changes. This month, art was displayed at places like Norden Living and Ruby’s Clay Studio and Gallery.

At Ruby’s, artist Belinda Hahn’s work was displayed. Hundreds of tiles displayed hand carved portraits of missing children.  According to Hahn, who began this project 15 years ago, she wanted to give the children a permanence that a blurry picture on a piece of paper at the grocery store couldn’t give them.

“This show impresses me the most of the shows that we’ve had in the last several years,” said Kay Hefferlin, a member of the studio’s gallery committee.

Artist Simon Malvaez’s work was showcased at The Academy, a social club located on Market Street. Originally from Mexico, Malvaez said this was the first time his work had been displayed in the U.S. Each of the portraits on display Thursday night was inspired by the people in his life.

“For me, it means a lot that my first exhibit is in San Francisco,” Malvaez said. “But more specifically, in Castro.”

On the opposite end of the walk was The Artist’s Gallery. Joseph Titi, who has owned the gallery since 2003, said they’ve always participated in the walk since it’s inception. The gallery displays art they’ve already bought for resale rather than having outside artists exhibit there for the art walk.

Titi, who was formerly a member of the walk’s committee, said it is sponsored by the Castro Merchants Association, and businesses can only participate if they’re members of the association.

At Spark Arts, residents of the Catholic Charities Peter Claver Community displayed their works. According to the gallery’s information card, the theme for the exhibit was inner square, where the artists used a square format to “reflect their views of the outside world as well as their own inner musings.”

One of the artists, who goes by Jeanie Lamborghini, had six pieces displayed at the gallery. She made four watercolors for the show in the three days leading up to the show.

“I don’t consider myself an artist by any means,” said Lamborghini. “But I have fun doing art and I’d like to get better and the only way you can do that is by doing it.”

Local Take, a gift shop tucked away around the corner from the Castro Theater, had work from multiple artists on display. They also had a table where attendees could make a felt garland for Valentine’s Day with Felt Flanerie.

Amanda Ondretti, the owner of Felt Flanerie, hand sews each of the toys, keychains, flowers, and other felt items that she sells. Her creations can be bought at Local Take, as well as the Fog City Flea, which is held every Saturday at the Ferry Building.

“I don’t try to stick to the same things all the time so I feel like it’s always changing and ever-evolving,” said Ondretti. “That’s my favorite part of it, at least for now.”