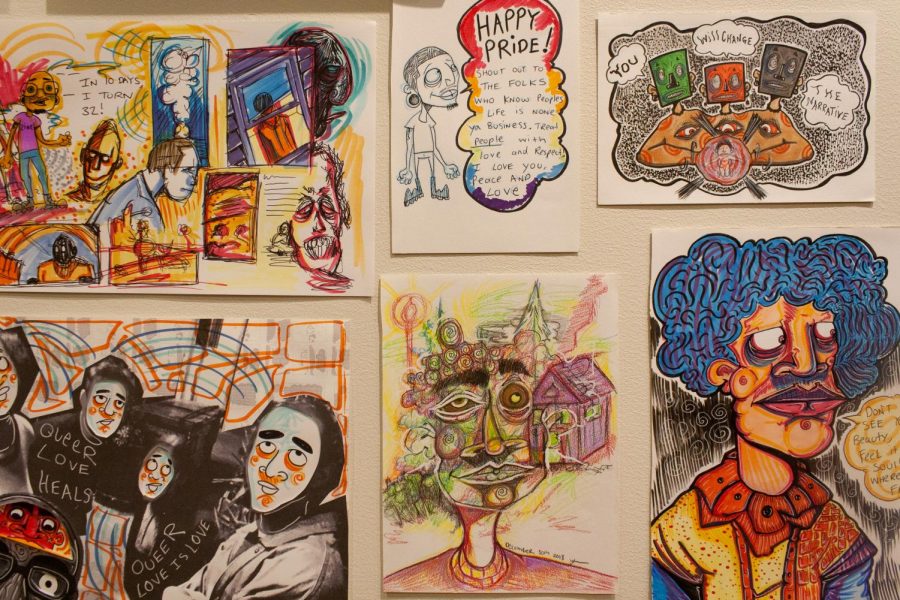 The event, “Queer Comics Saves Lives!” showcased all of Lindell’s artwork that solely focuses on the perspective of his Queer and Black experience, but also touches on important topics such as mental health.

“I feel a lot of joy,” said Lindell as he spoke to event attendees at the art showing. “It’s nice to see a lot of black and brown faces.”

The event was held at Strut, a center for the Queer community funded by the San Francisco AIDS Foundation located in the Castro and specializes in wellness and provides health resources such as HIV and STD testing.

One of the art programs at Strut, Just Art At Strut, hosts and offers various public events for the community including monthly art exhibitions that feature Queer artists. Although Strut is not an official art gallery, the art gallery committee of Strut tries its best to offer a space for Queer artists to showcase their artwork to the public.

Dylan Pem, a cinema major at SF State and editor at the Comic Arts Club, first got into comics during his youth and realized later on that the medium could go beyond the mainstream comic world of just superheroes. He first noticed Lindell’s comic art when he saw a Z-Fest poster made by the comic artist.

“He’s [Lindell] very comfortable using comics specifically to tell his stories and his thought process,” Pem said.”He’s visually saying something without actually saying it and that’s one of the cool things.”

When speaking about the art exhibit, Lindell mentions that he wants people to have a positive experience while looking at his work.

Baruch Porras Hernandez, Strut’s community events manager, said that the art committee has chosen 12 artists from around the world to feature at the monthly art exhibit since 2003.

“We’ve been featuring the work of a Queer artist,”saidHernandez. “And it’s usually paintings, photography, illustrations, visual art by Queer artists that either inspires or moves or excites or you know, celebrates the Queer community.”

The art exhibition began at 8 p.m., where attendees were sent to the second floor for the art showing. The third floor and balcony were open for attendees to sit and chat as complimentary drinks and food were also provided during the event. 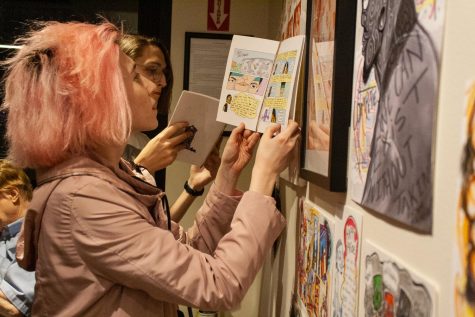 Originally from Compton, California, Lindell got into comics at 12 years old. In 2011, Lindell graduated from Otis College of Art and Design with a BFA in illustration and animation.The artist holds many art showings, but is currently working towards his MFA in comic at California College of the Arts graduate school.

Lindell’s parents divorced when he was 6 years old, and the cartoonist subsequently looked to comics as an escape from reality. As someone that deals with bipolar disorder and PTSD, Lindell notes that sharing his experiences with mental health is one of the focal points within his artwork.

“I think I stay grounded because I make it for me first and for y’all second,” said Lindell.. “So that way, even if you don’t like it, I’m still proud of something I made.”

Lindell also notes that most of his artwork draws inspiration from important women in his life, including his fiancee, Breena Nuñez, who is from the Bay Area and also a cartoonist.

“I just really admire him for his originality,” said Nuñez. “It’s always a reminder on how inaccessible certain services are actually to like a greater community especially for Queer folks of color like having a space that’s safe for people to talk about mental health issues.”

As someone that lives with mental illnesses, Lindell tries to vividly recreate his thoughts and feelings through his comic art to share with the world.

“My brain works differently,” said Lindell.. “There’s no one focus, intentionally. My brain doesn’t have to be linear for it to be acceptable. It’s art and it doesn’t have to be crazy to be profound. This is my art and this is how I want to put it.”